by Simone Feigl
Growing up in a household without owing a private car, Simone soon became an all-weather-cyclist. As Communications and Project Manager she shares her passion for cycling with the Bike Citizens community and with customers.
Graphic © Bike Citizens, OpenStreetMap contributors, Mapbox

USE CASE 1: Waiting time due to traffic light

Traffic situation:
A cycle path (north-south)  is situated parallel to a park and turns right at the crossroads. About 200 meters in front of the crossroads there is a path (open for people cycling) through the park that connects to the west-east route of the street.

Problem:
People cycling use the path through the park even though the surface of the street would be better and safer (especially in winter, autumn and on rainy days).

Question:
Do  people  prefer the path through the park? And if so,  why are they using the  path with the unpaved surface?

Solution in the field:*
Optimize the traffic light (with possible dependences to other traffic lights) to steer the whole traffic in a smoother way. 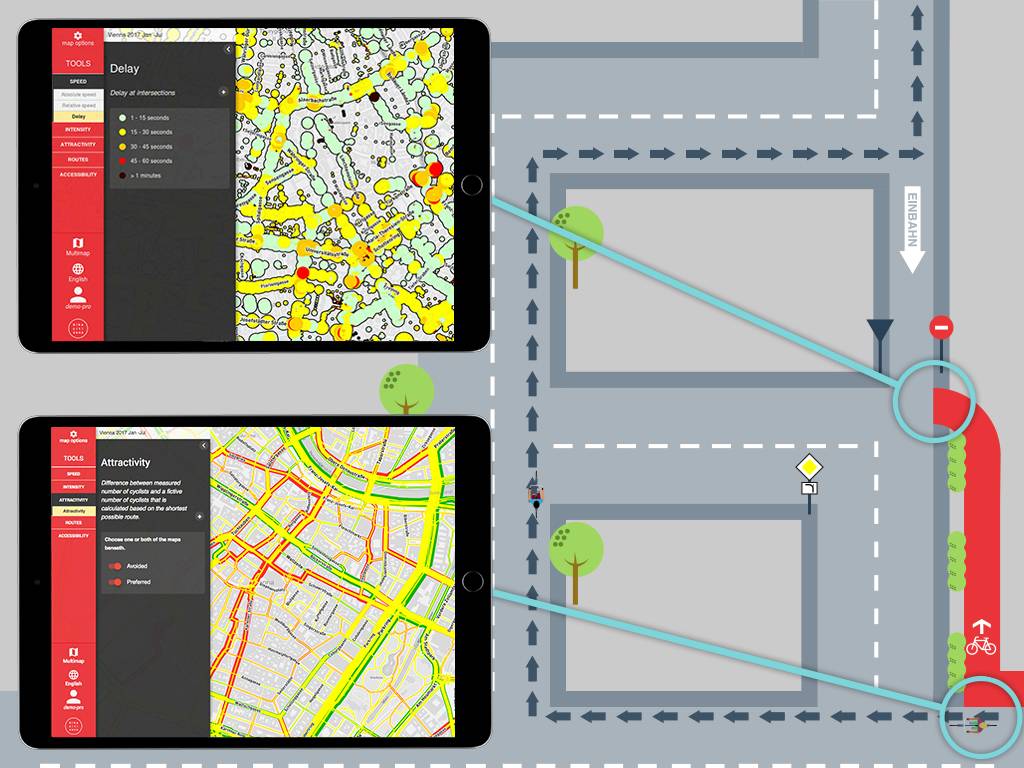 Traffic situation:
A new 500m long cycle path was implemented in south-north direction along a street with lots of traffic. The path is separated from the street by bushes and other plants. After 500m going north there is an intersection where only turning left is allowed. Straight ahead there is a one-way direction south.

Problem:
The new cycle path is criticized by public due to high costs and low acceptance of people cycling. It is said, that the cycle path was produced just for image reasons of the mayor.

Question:
Is it real, that people cycling do not use the new cycle path? And if, why aren’ t they using the path?

Solution in the field:
Taking a look at the field, it becomes clear, that the alternative route provides less turns at intersections. Also, one part of the alternative route is a quite silent street with trees. Opening the one-way for people cycling reduces the turns at intersections. And would make the cycle path more attractive. Also, an extension of the cycle path would persuade people cycling to use the cycle path and also provide a more comfortable routing through the city. 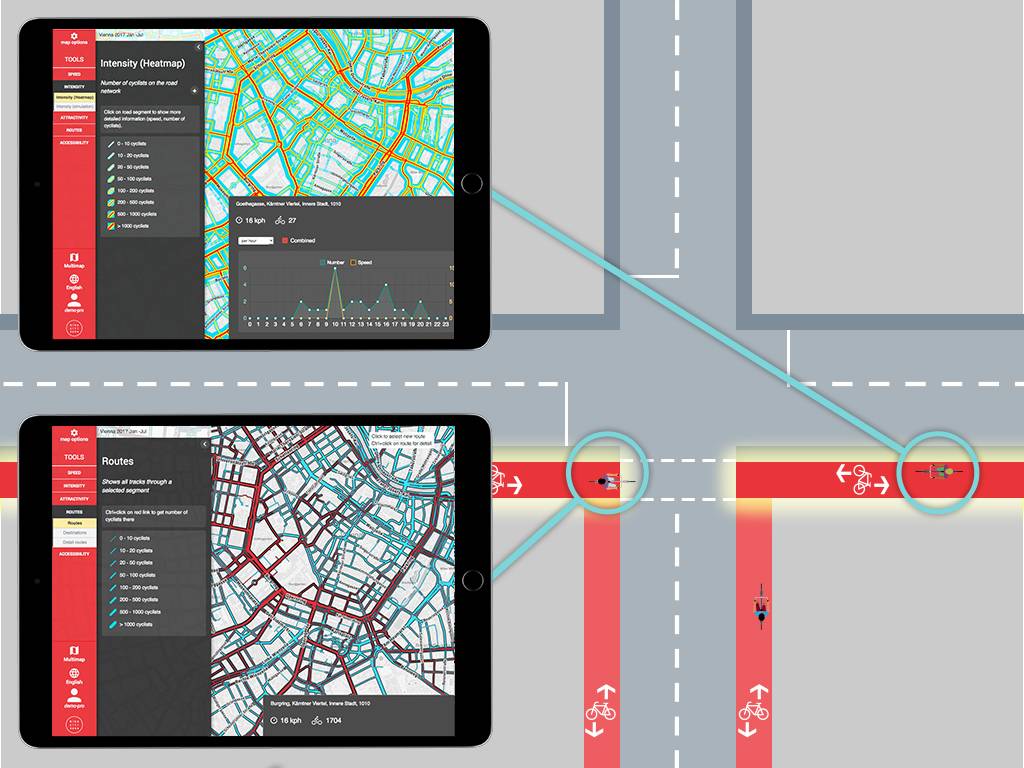 Traffic situation:
Along a busy street there is a new big 2-directions cycle path.

Along a busy street there is a new big 2-directions cycle path. Since the city has a traffic goal to reduce traffic emissions by a shift in modal split from motorized individual traffic to public transport and cycling, they used the construction work of the cycle path as chance for a change in mobility behavior of the traffic participants: They had huge awareness rising campaigns to promote cycling to get an habituations effect. Aim: People also should continue to cycle after the construction work was finished. How can the effect of the new cycle path and the awareness rising campaign be measured.

Question:
Was the campaign successful? Are there more people cycling on the cycle path now as were before on the street? Where do they come from? Is there need to optimize routes they come from?

What is Bike Citizens Analytics?

Bike Citizens Analytics is a interactive GPS data analysis tool for analysing, simulating and evaluating cycling data for future measures, developed in cooperation with the NHTV University in Breda. Bike data generated with the Bike Citizens App can be loaded into the tool and processed. Besides that, external data (bike data, public transport, …) can be complemented for simulation and evaluation. It is available in over 450 cities worldwide and a free demo version is available upon request for city planners, traffic experts and municipalities at info@bikecitizens.net. The visual representation of the cycle traffic in Graz is presenting some features of the tool.

More infos
by Simone Feigl
Growing up in a household without owing a private car, Simone soon became an all-weather-cyclist. As Communications and Project Manager she shares her passion for cycling with the Bike Citizens community and with customers.

Take any list of cycling-friendly countries and the Netherlands will be on top. The Dutch cycling infrastructure is rightfully praised for its effectiveness and extent, making every point of the country accessible by bicycle. Now wonder that the Dutch are the most cycling nation on the planet. The bicycle ownership rates in the Netherlands are beyond belief - the average is 1.1 bicycles per person! For example, in my household, we have 7 bicycles between the four of us, and that's including two children, one of whom can't even walk yet. Cycling is obviously very popular in the Netherlands, thanks to the magnificent Dutch cycling infrastructure. However, what few people realize is that it takes a massive effort to make and keep it successful.
Interested in our Magazine?
Browse through it now
share article
This website uses cookies to improve your experience. Find further information in our privacy policy.
With your consent we also use cookies (e. g. from Facebook or Instagram) that allow us to provide advertising that fits your interests.
Decline Accept