Andrew Gilligan: This Is the Right Time and Place for Superhighways

Andrew Gilligan is London’s first Cycling Commissioner. His boss is Mayor Boris Johnson and together they attempt to transform the British capital into a cycle-friendly one. Not an easy task with cyclists’ deaths being blown-up in the media, and multiple stakeholders wanting their say in any infrastructural measure. A network of so-called Cycle Superhighways is in the making and being improved following heavy criticism, while quiet roads that lead cyclists away from busy streets are being mapped. Our London correspondent Nora Manthey spoke to the Cycling Commissioner about the challenges of change , segregation, gender issues, cycle safety in perception and reality, and the non-sense of cycle paths in Underground tunnels.

Actually the skills are not as different as you might think. What you need, to be involved in public policy, is the ability to ask questions and chase progress. And that was what I was doing as an investigative journalist anyway. A lot of it is about asking the right question and making sure that people are doing what they said they will do.

– What is the most important question you are asking at the moment?

Have you done what I asked? (laughs) We got substantial amounts of money to spend but we’ve had to look at how we spent it because it wasn’t well spent in the past. It was spent on paint-on roads which didn’t impress anybody .

– What is the most important project you are currently working on?

It’s the East-West Superhighway the so-called crossrail for the bike. It will be Europe’s largest potentially segregated urban cycle route. It is going to run from Barking to Acton – 18 miles right across London. The builders are digging in. We can see the segregated lane being installed as we speak. The face of London is changing and it is changing into a cycle-friendly one.

– There has been a request for improving the CS2 between Aldgate and Bow. Could you briefly gives us an idea of what it takes for a Cycle Superhighway to be installed or improved?

The CS2 was one of our first generation Cycle Superhighways. An exemplar of those paint-only schemes that has been very heavily criticised. Now, it is going to become a genuinely excellent facility with segregated and semi-segregated tracks almost all the way from Central London to Stratford. 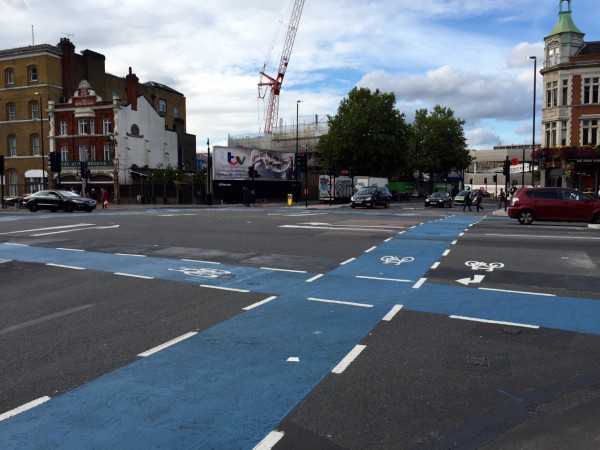 People always have different views on these things. It has become easier to do than it was. We have this massive cyclist community in London and huge demand. But even so there was opposition from shop keepers and there was opposition from the local council. There are always people who come up and say “I support cycling but this is the wrong place and time,” while actually this is the right time and place because cycling has never been bigger in London.

– Indeed. However, when you started a modal share target of 5% by 2020 seemed pretty much impossible. Do you still think the same?

Yes, we dropped that. I don’t believe in artificial targets. My task is not to get some kind of arbitrary modal share which means nothing because it is a moving target as the number of journeys overall made in London is increasing all the time. My task is to get the facilities in place to enable people to cycle. And who knows we might get more than 5%.

– Cycling in London is most discussed when fatal accidents happen with the main message being – I am exaggerating – cycling kills. How do you tackle that problem?

It is a problem of reception more than reality. In reality, it has never been safer to be a London cyclist. The number of fatalities and serious injuries is at a 30 year low per journey. It has come down by about 75% in the last three decades. And yet, there is always all consuming coverage of any cyclist injury or death. Much more coverage actually than say a pedestrian or motorist death will get and that contributes to the wrong perception of cycling as dangerous.

Having said that we have to address the perception as much as the reality and that is what the Superhighways are also intended to do. The fact is that a vast majority of injuries and deaths occur at junctions. So in order to reduce the actual number of deaths all you need to do is change junctions. But we are doing the bits between the junctions as well. We are segregating the links because it makes people feel safer, even if it does not make them actually much safer.

– Not many women are cycle.  Hence, you said you would like to see more women cycling. How do you intend to address women in particular?

There are certainly disproportionally few women cycling. Just over about half of people in London are women, but only about a third of them is cycling. I think the slightly “macho nature” of cycling in London puts them off. I hope very much that these segregated lanes and these quiet backstreet routes will encourage more women to cycle. And will change the culture of cycling as a whole, reduce the testosterone levels a bit – de-lycrafy, as the Mayor says.

Fortunately, we are already seeing more women, we are seeing more BME (black minority ethnic) people. If cyclists were just white men it would not be terribly representative of London because most people in London are not white or men.

– You just mentioned the quiet backstreets. Could you elaborate on that scheme?

London has got this massive great network. Unlike Continental or American cities, we have not got wide streets basically. Berlin or Paris have these great boulevards, which were laid out in the 19th Century by dictatorial regimes that “bull-dozered” large numbers of houses away. London being a democratic city has not been able to do that, so our streets have still a sort of narrow medieval pattern. What we have got is this network of side streets and canal towpaths and the quite ways were intended to link up these streets. You can go anywhere you want to go in London on a quiet road with a few exceptions. You usually have to use a busy road to cross the river for instance. And our idea is to link up and sign post these roads but they will be still pretty direct.

I have to say I am a bit concerned with the progress of how some of those are going. However, we are moving ahead pretty fast. The quiet roads are mostly on roads that are not controlled by us. London has 32 local boroughs and they control most of the smaller roads and so progress is slower.

– How will you make Londoners and tourists aware of these numerous cycle routes ?

– There has also been talk about using disused Underground tunnels as a new cycle path. What are your thoughts on that?

Utter complete non-starter. For a start, there aren’t any really. There is a handful of disused tube tunnels in Central London but they don’t link up anywhere. There is only one that is potentially interesting, which is a former tram subway underneath King’s Way. 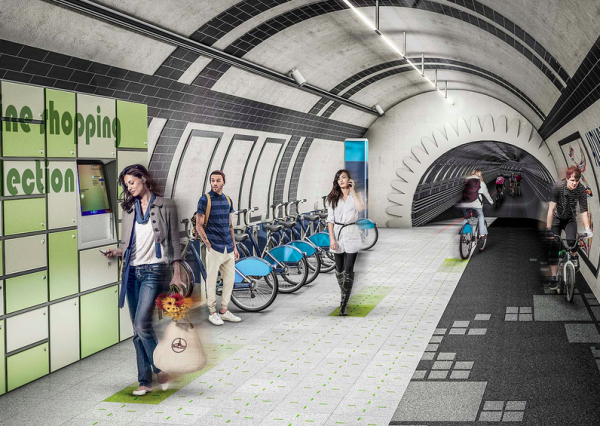 Also, tube tunnels are impossible to get to because being underground stations, they are accessed by either lifts or escalators, so you would basically need to build a new spiral ramp or something similar to take you down, which you would then need to cycle up again and it would take you twice as long as on the surface.

London cycling is played by these kind of gimmicky ideas – cycle tracks above railways. They are all a complete waste of time. They are good for a picture in the paper but will all cost far too much for the benefit they deliver even if they are possible to deliver, which they are not.

– Your boss Boris Johnson is believed to leave office in 2016. What will happen to his Cycling Commissioner?

My job is a political appointment, so it will end when the Mayor’s term ends. If someone wants to reappointment me, I’d probably come back but it is up to the next Mayor.

– Are you entertaining any political ambitions yourself? Cycling has proven a powerful publicity vehicle for a Mayor of London…

No, no, no, I have absolutely no political ambition.

– If you could only name one, which has been your biggest achievement as Cycling Commissioner?

I think the East-West Superhighway is going to be the biggest achievement. But it is not just me, it is the Mayor, the deputy Mayor of transport – without the leadership this would not have happened and Transport for London is also doing huge amounts of detail planning and consultation and stakeholder discussion. Hundreds of meetings and thousands of hours of work have been done by dozens of people on this flagship scheme.

We are doing a total of five Superhighways and I am hoping that they will prove to people that you can put cycle infrastructure in and the traffic does not melt down. It is not being the end of the world and life goes on and then we will be able to do more.

I would like to see that most mayor roads in London have segregated cycle lanes and I would also like to see less traffic in London. At the moment the vast majority of people in Central London do not come by car, they come by public transport and increasing numbers come by bike or on foot. Something like 80% of journeys to, from and in Central London are not made by motor vehicle and yet, the motor vehicles still dominate Central London in a way wholly disproportionate to the amounts of transport it delivers. I think we need to start thinking about how we change that situation.

German cities have plenty in the pipeline over the next few years when it comes to bicycle traffic: inner city bicycle lanes are being built, express lanes such as the RS1 Ruhrschnellweg are facilitating more commuter traffic on bikes and there is a general move towards increasing modal split of cycling. The National Bicycle Traffic Plan (NRVP) in Germany will provide 3.2 million euros until 2020 towards bicycle traffic projects. But which improvements do these measures bring? A bicycle lane where no one rides their bike, missing connections and long waiting times at crossings are only half effective.The newly developed “Bike Citizens Analytics” data analysis tool will assist with bicycle traffic planning in future.
Interested in our Magazine?
Browse through it now
share article
This website uses cookies to improve your experience. Find further information in our privacy policy.
With your consent we also use cookies (e. g. from Facebook or Instagram) that allow us to provide advertising that fits your interests.
Decline Accept