Cycling the Loire in Nantes

This success, in conjunction with the expansion of the cycling network was a significant factor in the city being selected as the host of Velo-city 2015. Although Nantes slipped one place to seventh in the recently published Copenhagenize Index 2015, the city has made strides to modernise and become more bicycle-friendly.

Orange Bicloo bike sharing stations are dotted around the city centre, providing a great way to explore the city and go shopping on two wheels. They are easy and for little money to use, although the plastic-design handlebars are somewhat cumbersome and far from attractive. 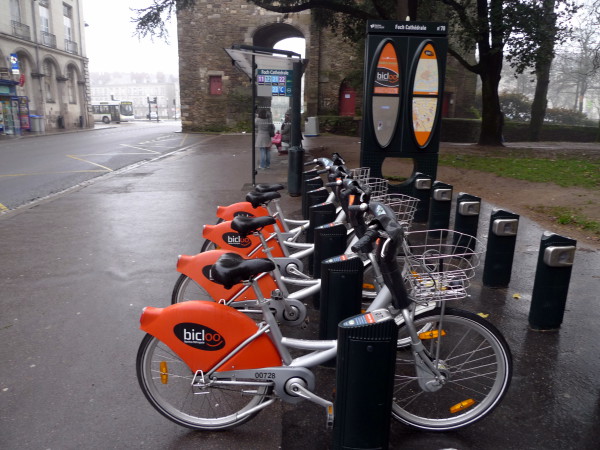 Equipped with a bike, you quickly see that Nantes is a wonderful place to explore on two wheels. Within 15 minutes you can cover virtually the whole city.

The city centre proves to be very bicycle-friendly. Nantes is also one of the few shining lights for successful bus rapid transit systems, where buses pass through the city without much loss of time or traffic, similar to rail vehicles. Thanks to the fast bus connection from the south (Vertou) into central Nantes, the number of cars on the roads has almost halved.

It is not just the bus system that has been given a high-speed route through the city; cycle paths were also set out on elevated lanes in the middle of the street in some cases. This may initially seem a little strange, but it is an amazing experience once you get used to cycling in the centre lane. There are also relaxing cycling routes along the Loire. Evident in Nantes are the many roundabouts containing at least one cycle lane, where cyclists even have right of way in some cases. Exemplary to this point, despite the fact that streets filled with cyclists is not an image you associate with Nantes, unlike the situation in Berlin, Vienna or Graz. The further you move out of the city centre, the clearer it becomes that the French city is still dominated by Peugeot, Citroën and Renault. There are also scarcely any bicycle racks or bikes to be seen leaning against walls or fences. On the contrary, parts of the city do not seem at all developed for cycling. Even as a cyclist, I have to remain stuck in traffic because of the lack space until I can get back onto the cycle path.

Nantes is definitely a city with great cycling potential. The existing cycle paths are generally well accessible and largely well connected, even though they sometimes run left, right and centre on streets depending on the available space. Due to its size (around 66km² in area), Nantes is an ideal city for cycling, where virtually everywhere is best reached by bicycle. It is just a shame that the people have not fully taken to this. Nantes is a very young and dynamic city with the will to change – more is sure to come here in the future.

Neighbourhood tips: 16 locations in Friedrichshain you should know

What isn't there to be discovered in Friedrichshain?! From cafés to bike shops – here are the Bike Citizens tips for the Friedrichshain district! And all of them can be quickly reached by bike – our 5MinutesByBike tool shows you how to get there in 5, 10, 15 or 30 minutes. Simply enter the location and let the discovery tour begin!

Travel tips: All you need to know when travelling with your bike to Asia or the Pacific

If you plan your next trip in the Asia-Pacific region, consider taking your bicycle. Travelling by bicycle is a great and inexpensive way to see new places. This article aims to take the guesswork out of travelling by plane, train, and bus within selected Asia-Pacific countries.

Graz.Tokyo #1: Fulfill your dreams and do some bike travel

Cycle 14,000 kilometres half way around the world, with not much bicycle touring experience? This is what Fabio and Elias from Austria are planning. In “Part #1" of the bike adventure series, Elias and Fabio explain why they are “really” doing this bike travel.
Interested in our Magazine?
Browse through it now
share article
This website uses cookies to improve your experience. Find further information in our privacy policy.
With your consent we also use cookies (e. g. from Facebook or Instagram) that allow us to provide advertising that fits your interests.
Decline Accept