A visual representation of bicycle traffic in Graz

Graz is known throughout Austria as a university city. With approximately 45,000 students and around 300,000 residents, young academics influence the city and flow of traffic. Bikes are the most favoured form of transport amongst students. They are affordable, convenient and fast. The Bike Citizens app has been available in Graz since 2012 and accompanies hundreds of cyclists each week as they travel around the city. Thanks to the new “Bike Citizens Analytics” GPS data analysis tool, anonymised data can now be evaluated for urban planning purposes.

Those who commute by bike each day will be very familiar with Graz’s geographical layout. There are very few ascents in the city centre, unless you decide to tackle the Schlossberg hill by bike. Extra calf strength is only required outside a 15-minute radius if heading towards Mariatrost, Lustbühel or the Ruckerlberg . In contrast, it’s easy to get from A to B within the city centre as Graz is small and compact. Most places can be reached within five minutes by bike. It rarely takes longer than 15 minutes to get anywhere by bike. 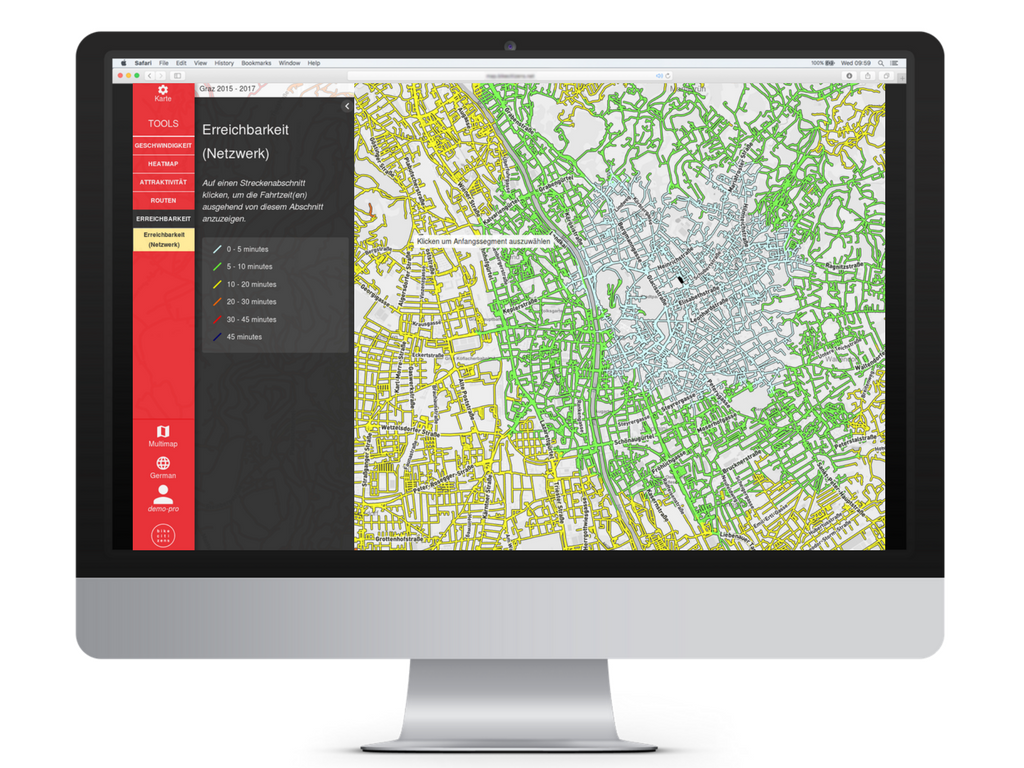 Getting to and from Graz University by bike. Most districts are situated within a 5-minute radius. Graphic © Bike Citizens, OpenStreetMap contributors, Mapbox

This diagram illustrates how quickly the city centre can be reached from the main university campus and shows the general catchment area for students at Graz University. We know that all roads lead to Rome (or, in our case, to the main university); however some routes are more popular than others. The same logic applies to the infrastructure around the university campus. There are many traffic-calmed streets in the neighbourhoods surrounding Graz University. However, the lack of cycle infrastructure on the main Heinrichstrasse, Elisabethstrasse and Merangasse transport routes means that cyclists have to opt for other routes and avoid the main roads. The following diagram shows which roads are “avoided/preferred”, regardless of whether they are the shortest route between A and B or not. 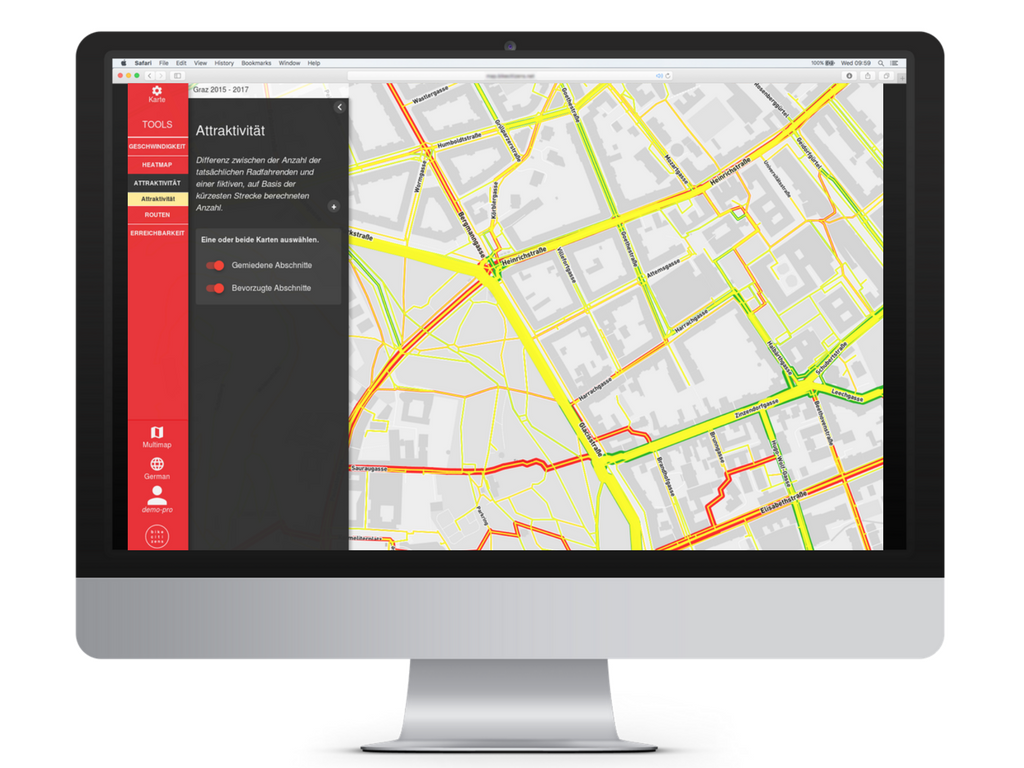 Zinzendorfgasse, the cycle path along Glacisstrasse, Leechgasse and Hugo-Wolf-Gasse are the main routes between different parts of the city. Traffic-calming measures are in place here and so they are the quickest routes. 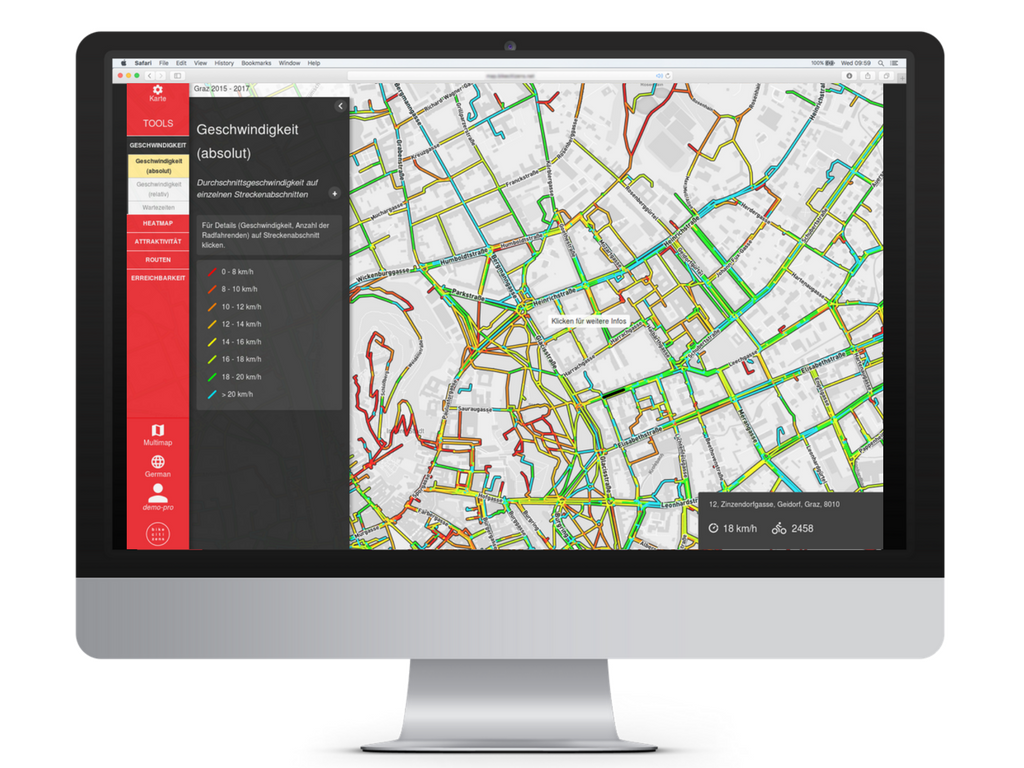 This diagram shows how quickly the road network around the university can be navigated by bike on average. Graphic © Bike Citizens, OpenStreetMap contributors, Mapbox

There are no traffic-calming measures on the Glacis cycle path but it is still one of the quickest routes. It is one of the main routes in Graz and is ideally situated next to the city park but also close to the 5-lane Glacisstrasse road. There are no phased traffic lights here unfortunately, meaning cyclists are likely to encounter red lights along the way, leading to longer waiting times. The following diagram shows which parts of the city still incur waiting times for cyclists. Areas marked in black represent the road sections and crossings with the longest waiting times. 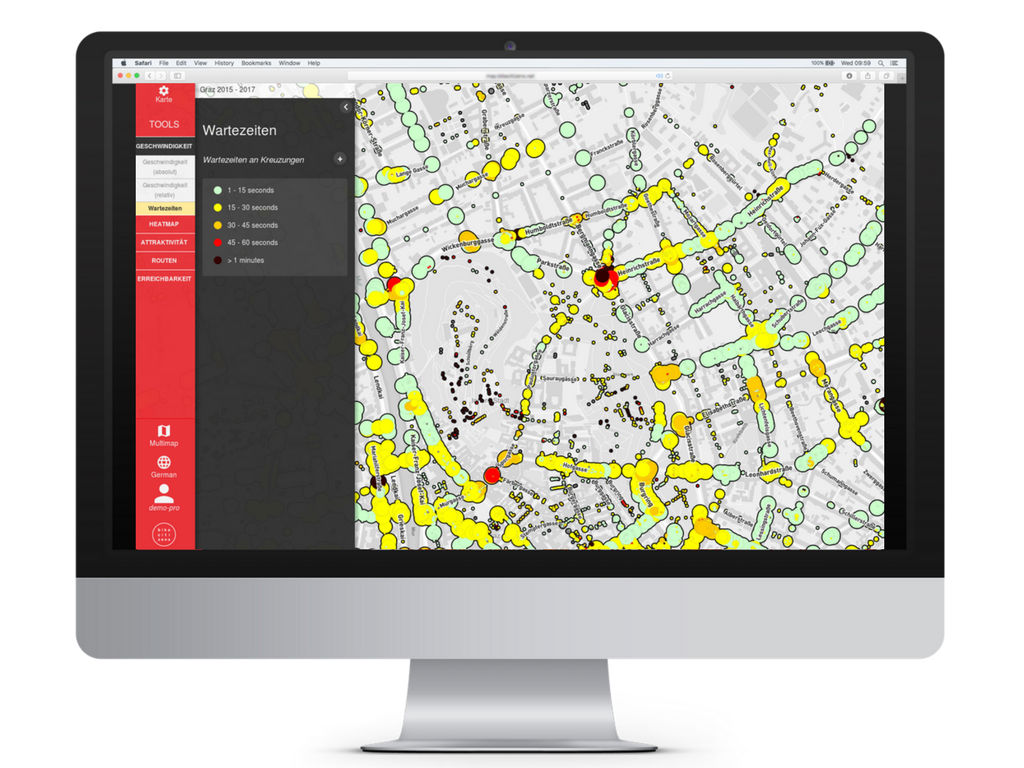 In addition to the Murradweg, which connects the city from north to south, the Wickenburggasse road is one of the most frequented cycle routes. A narrow pavement along the Wickenburggasse was shared by cyclists and pedestrians for a long time, and a bus stop often interrupted the flow of traffic in this zone. The cycle path was expanded in 2016; a measure which had been necessary for a long time since many routes involve using this cycle path. 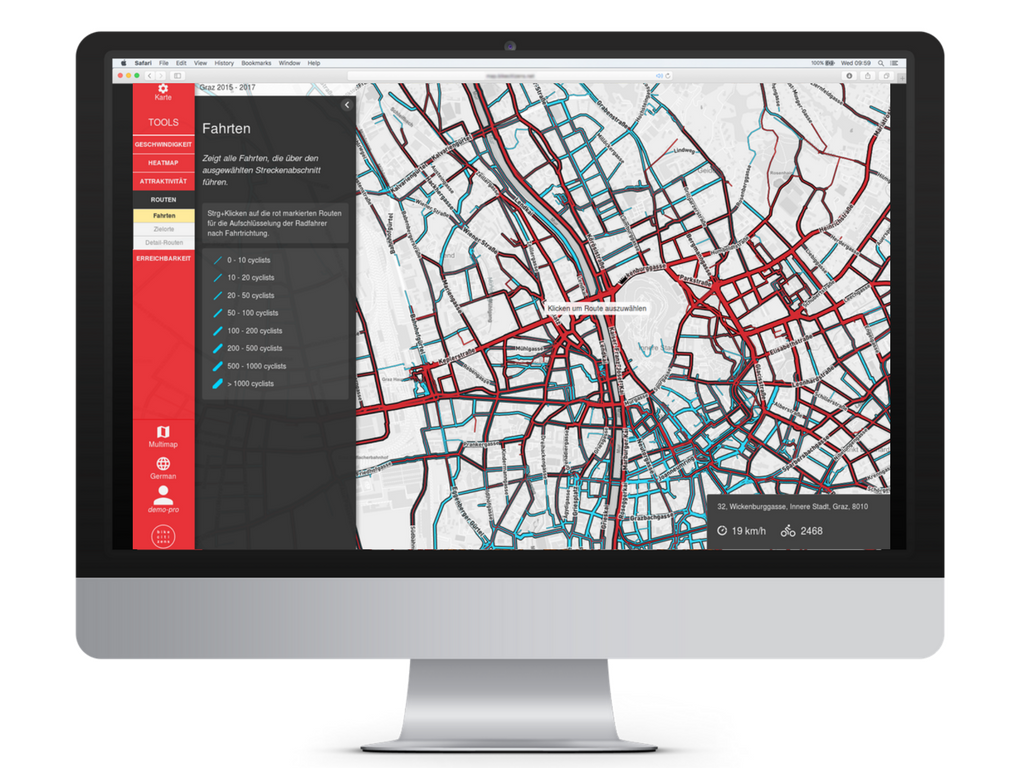 By choosing a segment of the Wickenburggasse road, this creates a route network extending across the entire city. It is the most popular route for both shorter and longer routes between Geidorf and Eggenberg. Graphic © Bike Citizens, OpenStreetMap contributors, Mapbox

Despite its bicycle-friendly location and thriving bike scene (bike cafés, bike shops, etc.), cycle traffic in Graz has experienced a decline in modal share. In 2008, 16 percent of all roads in Graz were frequented by bikes: nowadays it is closer to 14 percent. The lack of an overall concept was criticised by the bike lobby Steiermark: cycle paths have been created and gaps in the network closed in certain places, but a homogeneous cycle network is still missing. There is no cycle infrastructure around all of the city’s main roads and beyond (Münzgrabenstrasse, Petersgasse, etc.). There are also no traffic-calming bypasses or other measures, meaning that anyone wanting a more pleasant journey must factor in alternative routes. Graz city has developed a mobility concept and defined clear measures and objectives to increase the modal share to 20 percent by 2020 and promote cycle traffic.

Graz is home to a cycle network spanning 120 kilometres. This is not much compared to other cities of a similar size. In the following diagram, we show how Graz’s transport system would look if people only used cycle paths. In the second diagram on the left, we are a little more generous and tolerate traffic-calmed side streets for bicycle traffic. Food for thought: Routes are only considered safe and sufficiently designed if children are able to cycle along them. 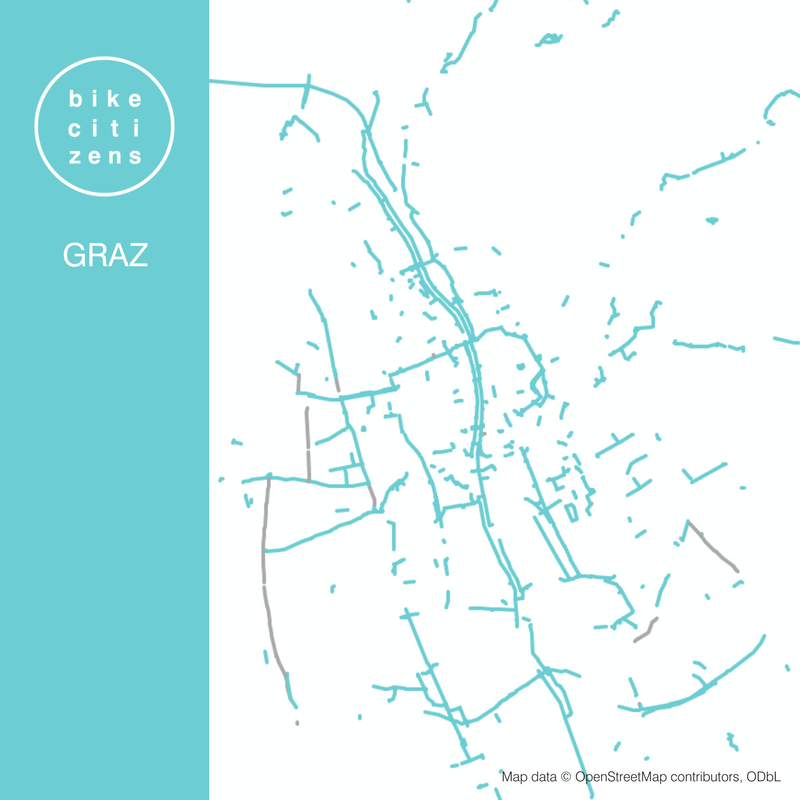 Cycling in Graz is fun and there are many people who choose cycling as their preferred mode of transport. This is not because the city is well-designed or particularly bicycle-friendly, but rather because of the attitude of students and locals living here. The city of Graz has a lot to work on over the next few years – a car park at Eisernes Tor/Opernring in the city centre contradicts the objective of a traffic-calmed city centre and improved quality of life.

What is Bike Citizens analytics?

Extracts from Bike Citizens Analytics were used to provide this analysis of cycle traffic in Graz. This data analysis tool allows cycle traffic data to be easily evaluated and visually presented. A free demo version is available upon request for city planners, traffic experts and municipalities at info@bikecitizens.net.

Germany: The RS1 bike highway in the Ruhr Metropolitan Region has become a showcase project for bike path infrastructure. The final expansion phase will connect ten major towns, around 60 large enterprise locations and a total of four universities over an area of 101 km, from Duisburg to Dortmund and then onto Hamm.

Last Autumn, the Finnish capital of Helsinki made many international headlines when it reported glorious results from their new bike sharing system Kaupunkipyörät (“city bikes”). For 2017, Helsinki has almost tripled the system’s capacity for the upcoming season, starting in May. Let’s have a look at the past, present and future of bike sharing in Helsinki.

The recently launched GPS data analysis tool, Bike Citizens Analytics, developed in cooperation with NHTV Breda, will enhance the way how we use cycling data for urban planning. To understand the benefits of Bike Citizens Analytics, we came up with three use cases, that simplify traffic situations.
Interested in our Magazine?
Browse through it now
share article
This website uses cookies to improve your experience. Find further information in our privacy policy.
With your consent we also use cookies (e. g. from Facebook or Instagram) that allow us to provide advertising that fits your interests.
Decline Accept