At a red light, I was waiting aside a motorcyclist I encountered, as we both descended the same hill, he sped it quickly and I joined a few moments later neatly passing the queuing cars. A short conversation ensued, continuing off from the previous intersection. He said he was jealous of the exercise I was getting while biking, I asked him if he’d consider biking but he said he could never bike in Jerusalem.

by Guest Author
This is an article written by a guest author from the Bike Citizens community (full profile below). If you also want to share your cycling stories, contact us.
Picture © Bikes for Jerusalem

I told him I bike because I’m lazy, I’m not one to make time for exercising, and biking is a way to incorporate exercise into my everyday routine. His reply: If you’re biking your definitely not lazy. I recall him saying it longingly, as if it was out of his reach. This actually is a pretty accurate representation of most responses I get after people find out I bike in Jerusalem, usually with an additional “Jerusalem is so hilly and not suitable for bikes, unlike Tel-Aviv”.

Well, let me tell you. I don’t bike out of some great ideal, just a culmination of my loves and hates.
There are many reasons to be a biker: I don’t like traffic, I don’t like looking for parking, I don’t like going to gas stations. And I do like looking at trees while I bike, meeting friends and chatting while biking. Like that time I met of colleague of mine on the way to work and we tied up some loose knots. I like cutting through when the cars are idle, waiting for some dirt truck to back up. I should mention, there is general agreement that pretty much the whole city is under construction now. The motorists are very bothered by it, but it doesn’t affect my commute. I like starting the day with some movement, and learned to embrace being part of the weather, not shielded 24/7 from the elements.

Problem is, basically all biking infrastructure in the city is currently designated for leisure travel, not for everyday commuting. Paths are placed on the sidewalk and vanish if there are intersections, car parkings or benches, which is quite often. Also, the bike pathways incorporate slippery and bumpy Jerusalem stone, to name a few slights.

I am though doing the city a bit of a disfavor, constantly comparing it in my head to the Netherlands, where I studied as an exchange student. In Israel’s standard, Jerusalem has the one of the most extensive bike networks. But still, much more work is needed, and that is why I joined ‘Bikes for Jerusalem’.

My first activity in the organization was actually joining a lawsuit against Israel Railways that was barring bikes from going on the train. Something that was quite a problem as a student commuting from Jerusalem to Tel-Aviv. It was a ridiculous story, as the courts disqualified us cyclists from joining the lawsuit, which initially was started by a lawyer who had an e-scooter. Then there were two years in which only scooters were allowed on train. We plowed on and eventually were allowed to bring bicycles on the train. The victory was sweet and we broke open a bottle for the occasion.

Another new recent and much welcomed addition to the city’s biking scene is a communal repair workshop, started by our organizations very own. Twice a week a workshop with all biking tools is available for DIY bike fixing and bike building, as well as a team of bike mechanical volunteers teaching participants to fix flats, repair brakes, align their gears and more. The need was there, and a steady stream of people come in, without any advertising. 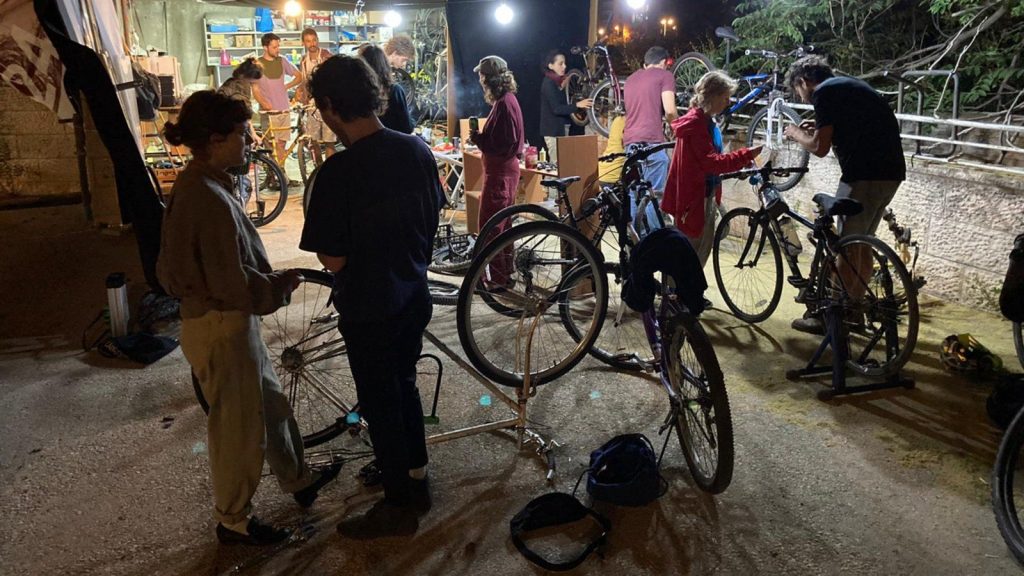 When joining the organization, what I wanted most was other bikers to spin around the city with, and my wish was dealt with according to the organization’s “DNA”. Our organization holds an Aramaic saying dearly, and that saying is ‘קריינא דאיגרתא איהו ליהוי פרוונקא’ meaning literally “Let the one who reads the letter be the agent”. In other words when someone brings up an idea, they are offered to lead it, while receiving help and guidance from others. So that is how I found myself helping to organize a community bike ride. It is known worldwide as ‘critical mass’, but we decided to name if differently because its original meaning got lost in translation. For the past two years or so we’ve been planning community bike rides, meeting by the city municipality (one of the highest parts in the city center) and mostly rolling together down, ending in a city park. It’s quite wonderful actually.

If I’m already mentioning the city municipality, it is worthwhile mentioning that they have recently instigated a weekly bicycle infrastructure meeting. Better yet, our organization has a group of urban planners that are bikers as well, and they regularly join the city’s weekly bike meetings. They tell us that their ideas are respected and valued. A recent accomplishment of theirs was changing city policy to cease designing bike paths on the sidewalks. The current design leads to conflicts between bikers and pedestrians, and our relationship with the pedestrians is very important to us and we cooperate together on a regular basis. Our next goal is promoting a network of bike paths. Currently the city has designed a circular path that goes by major attractions in the city, but a network is sorely needed.

As a Jerusalem bicyclist, I’m part of a small community of urban cyclists. We meet up at our communal bike rides, at the bike workshop, have a chatterbox groupchat, and of course spontaneously nod to each other and wave as were passing through the city in our everyday life.

As a matter of fact, we usually have a handful of German speakers at our events, who I presume gravitate towards biking events. So if you’re reading this, you’re invited! Right now Jerusalem is a great city for tourism biking, and follow us on facebook, meetup or on our website as our city becomes a great city for everyday biking as well.

Avi Frank from Bikes for Jerusalem

Bike Citizens on Tour in the US

Follow our co-founder Andreas Stückl and Paul Mayer on their tour through the US. They'll make three stops in 16 days: New York City, Interbike Expo in Las Vegas and the Nacto conference in Seattle. See the US through their eyes. Enjoy your rides - they will do it for sure!

Cycling Proficiency Test: When you cycle alone, you have to do everything yourself

The cycling proficiency test and the first cycling trip alone are important rites of passage for both children and their parents. In Austria, children can be entered for their cycling proficiency tests from the date of their tenth birthday. After passing the test, they can be seen happily brandishing an official certificate which sanctions their new-found freedom. This is an achievement which makes everyone feel very proud. So, is it now time to head off on the road? The following interview with 10 year old Amélie will awake memories and provide encouragement for both parents and children.

Everything “velo” in Nantes. Velocity 2015

Paris has the biggest potential to become the most bicycle-friendly city in the world, declared Christophe Najdovski, deputy mayor of Paris, at the competition organised by the Danish bicycle embassy for the future no. 1 cycling city. With his argument that Paris, compared to Copenhagen and Groningen, has even more pristine roads that can be made into cycling zones, he checkmated his counterparts Morten Kabell, mayor of Copenhagen, and Paul de Rook, mayor of Groningen. Even if the battle between the three mayors wasn’t that serious and brought up a lot of laughter, Paris’ mayor spoke clearly about the big plans for Paris.
Interested in our Magazine?
Browse through it now
share article
This website uses cookies to improve your experience. Find further information in our privacy policy.
With your consent we also use cookies (e. g. from Facebook or Instagram) that allow us to provide advertising that fits your interests.
Decline Accept