To the moon and back by bicycle!

720,000 kilometres by bicycle in 6 months? The citizens of Bremen are confident that they can rise to this challenge. They have been warming up for what is probably the longest cycling trip in the Universe.

by Karen Rike Greiderer
Karen runs the Urban Independence Magazin since 2017. The passionate pedal pusher has already travelled plenty of miles on her bike. Today she combines either a folding bike and a bike trailor for kids or a Compact Cargobike with the railroad in Berlin and Brandenburg, touring mostly with her daughter. Her approach to riding a bike is multilayered with a love of detail, but always practical, going back to the days of her youth spend in Austria.
To the moon and back by bicycle © BREMEN BIKE IT!

Most of this super cosmic journey is taking place on Earth. The Travelling to the Moon on Earth campaign with Bremen BIKE IT! in partnership with the Bike Citizens App. During Space Year 2018, Germany’s top cycling city Bremen in the north of the country is calling upon its citizens to cycle 720,000 kilometres in six months. This equates to the average distance between the Moon and the Earth and the Earth and the Moon. The challenge may only be carried out on the short routes in the city and in the picturesque surrounding countryside.

A small astronaut is documenting how many kilometres that the citizens of Bremen are away from their destination. He accompanies the tour by travelling on a digital orbit and visualises the kilometres travelled in real time. Take a look on the Moon Trip on Earth pages! 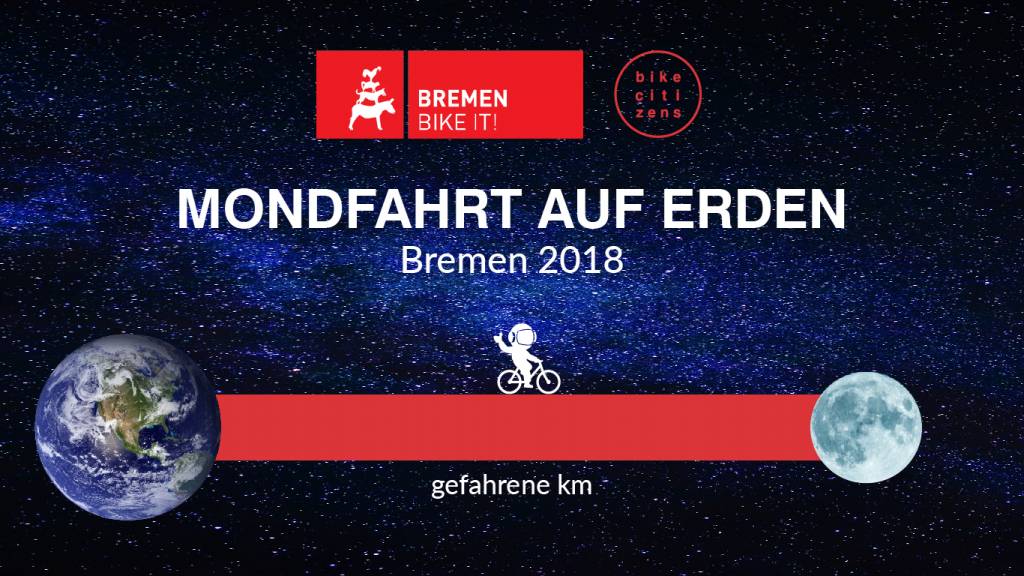 Certainly an ASTROnomical feat! Six months – six tasks – one mission
Blast off takes place on 1 April 2018. Bremen BIKE IT! rallies cyclists to take part in collective cycling trips and campaigns every month. The whole Bremen cycling community is encouraged to take part in fun, exciting and well-organised cycling competitions that are guaranteed to get the calves burning. Every kilometre counts!

A brief summary: There is a trip to the moon. This main mission is achievable if it is carried out collectively. If the citizens of Bremen manage to cycle 720,000 kilometres in six months, the city of Bremen will subsidise cargo bikesthat will be available for free general use!

An extra competition is held every month to provide further excitement. The typical cycling spirit of the citizens of Bremen is being called upon – the most active cyclists will receive special rewards. There are numerous intergalactic prizes to win. So, keep your eyes peeled! Challenges and prizes are always revealed at the beginning of the month. However, we can now reveal that
a special challenge called “Launch into Orbit” will run from 1-30 April: If you want to be really active, you need to track 25 trips that are more than 2 kilometres with the Bike Citizens app. Further details about the challenge and prizes will be revealed on 15 March on the Moon Trip website!

Space. Travel. Bike. City. Why Bremen?
Bremen is Germany’s leading aerospace research hub. In addition to the Centre of Applied Space Technology and Microgravity (ZARM) at the University of Bremen, there is a close-knit community of companies and institutes in Bremen which are helping to make the city a global leader in the aerospace sector. Bremen is nearly as good at cycling as it is at aerospace research. More people travel by bicycle in Bremen than in any other city in Germany that has over 500,000 inhabitants. The Hanseatic city is ranked third in the whole of Europe after Copenhagen and Amsterdam. Read more here.

Bremen is hosting this year’s International Astronautical Congress (IAC) and wants to go to the Moon and back on at least a bicycle. The public open day during the IAC on 5th October 2018 is the highlight of the aerospace year in Bremen and it also marks the grand finale of the Travel to the Moon on Earth Challenge. Has the astronaut managed it in the meantime? 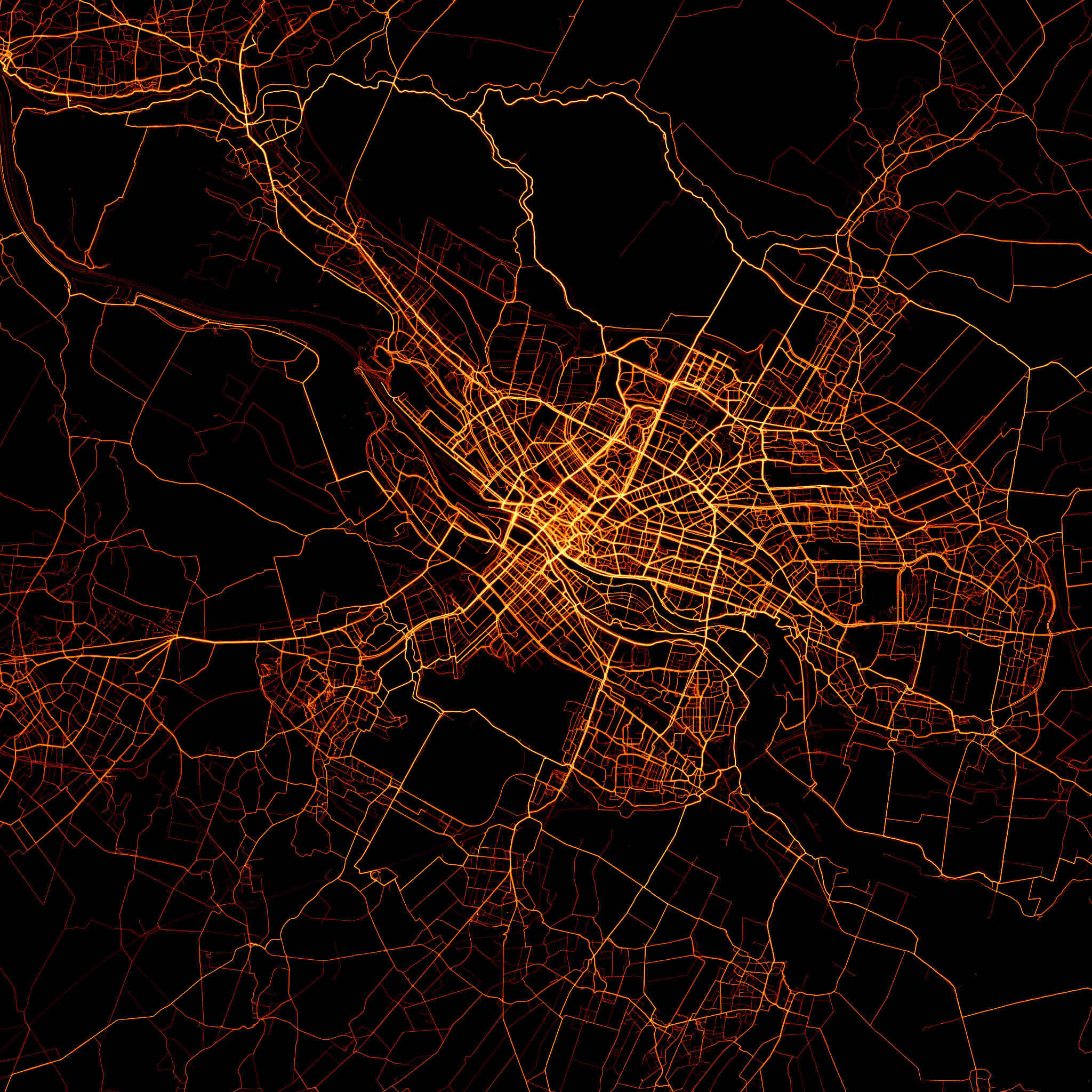 Unknown worlds? Let’s go to Bremen!
Until it is actually possible to cycle on the Moon, it is necessary to harness our combined pedal power on Earth. It doesn’t matter whether you live in Bremen, whether you are cycling to work or for leisure, or whether you are simply exploring the Hanseatic city of Bremen for a weekend by bike, all the kilometres that are achieved together count in the end. The Bike Citizens app helps you to find the quickest, most pleasant or yet-to-be-discovered cycling routes and destinations. The Bike Citizens online route planner helps you find your way.

So, firstly, read the Bike Citizens Portrait of Bremen and then study the “Bremer Sternstunden” event programme. There is something here for everyone on the subjects of aerospace and cycling. The next step is to hop on your saddle and launch yourself into orbit around the wonderful Hanseatic city of Bremen. Cycle your way to celestial heights!

How can I get involved?
Click here to read comprehensive information on how to get involved.

This is how it works
1. Download the Bike Citizens app free of charge
(There is lots of information to read here on the subject of aerospace technology)
2. Download map materials for Bremen / Bremerhaven free of charge
3. Register for the Travel to the Moon on Earth challenge

by Karen Rike Greiderer
Karen runs the Urban Independence Magazin since 2017. The passionate pedal pusher has already travelled plenty of miles on her bike. Today she combines either a folding bike and a bike trailor for kids or a Compact Cargobike with the railroad in Berlin and Brandenburg, touring mostly with her daughter. Her approach to riding a bike is multilayered with a love of detail, but always practical, going back to the days of her youth spend in Austria.

Spoke cards – the secret of ominous cards in your bikes spokes

There’s something mysterious about spoke cards. A secret code for bike couriers? What is it about those colourful cards stuck in the bike spokes? A glimpse behind the curtain of the courier scene.

Eurobike Award 2015: What are the “must have” innovations of the year?

Each year in August the hippest product innovations in the bicycle scene are honored with the Eurobike Award at Lake Constance. Yesterday it happened again. The outstanding innovations, from an inner tube to an App for cyclists, can be seen at the Eurobike Show until the 29th of August.

Bringázz a munkába! Hungary is cycling to work

The Hungarian bike to work campaign has been relaunched in 2018 after a short break in the past few years. Now the campaign has been fitted with the Bike Citizens app, with which participant can win prizes just by logging into the app and cycling at least 50% of their individual work days to work.
Interested in our Magazine?
Browse through it now
share article
This website uses cookies to improve your experience. Find further information in our privacy policy.
With your consent we also use cookies (e. g. from Facebook or Instagram) that allow us to provide advertising that fits your interests.
Decline Accept