Graz and Forlì as Examples of Contrasting Bicycle Culture

A great way to spend a day in our home towns. The perfect discovery of a new life focus. A practical travel companion. Or simply a way to get to know a foreign city quickly and with heart and soul. By changing our urban environment, we also change our routines. Our routes, goals and perspectives. Each city has its own bicycle culture. Its own opportunities, as well as hitherto unknown challenges. By comparing different cities, we can broaden our personal cycling horizons and find inspiring examples and constructive input for improvements to city planning.

by Edith Hölzl
Born in Styria my home as a conference translator is between languages, articles and words. In my studies and my job I am a linguistic tinkerer of passion. In my free time I love to travel and expand my linuistic toolbox.
Foto: Public Domain

A Cycling Globetrotter Describes Her Experiences

The experiences of a travelling cyclist show why bicycles always make a great travel companion and how they can help us to learn from other cities. Evelyn (24) lives in Graz and is on her bike every day – a deliberate decision on her part. For her, it is “undoubtedly the best mode of transportation in the city” and also brings with it a wonderful sense of community. In addition to environmental friendliness and cost efficiency, Evelyn’s personal feelings also play a major role in this. She feels good as a cyclist in Graz, with “well-developed cycle paths and many like-minded people”. The cycling scene in Graz also offers a wide range of events. These are open for participation. To help cyclists to feel more like part of the cycling community. And to enable them to play their part in shaping the urban environment.

During the month of May, the bike becomes the focal point of urban life. Whether it’s competing for the laurels in the weatherproof Altbaukriterium indoor race or joining the eventful and educational entertainment of the short film night rides starting from the Postgarage venue (2-3 short films about cycling are shown at various night-time stops), bicycle culture in Graz has something for everyone. Critical Mass, a cycling tour through Graz on the last Friday of every month starting from Südtirolerplatz, gives cyclists the opportunity to make their voices heard. It began as a protest, to raise awareness of other road users, to take cyclists out of the shadows and to make them visible. And it serves as a mark of respect to cyclists who have lost their lives on the roads. This is just a small sample of the range of events on offer in the Graz cycling scene.

Evelyn also sometimes notices some significant room for improvement in Graz. Compared with other cities, her cycling experiences in Graz are not always so positive. Particularly in areas with no cycle paths, such as Merangasse and Riesstraße. “People in cars don’t keep their distance, and you feel really small on the road. I am happy when I (as a human being) am regarded as an equal on the road. After all, the roads are intended for all road users.” 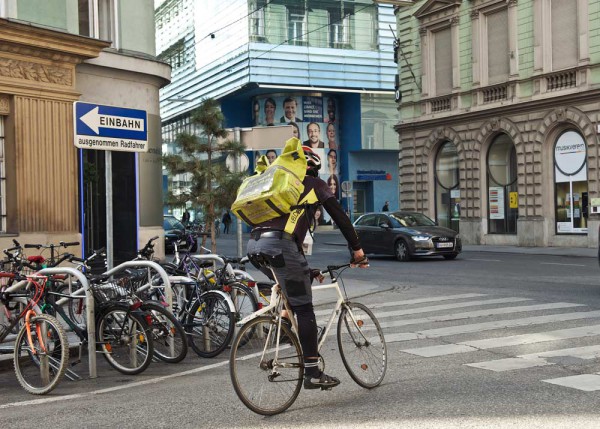 When Evelyn moved to the small Italian city of Forlì for an extended period of time, she discovered a totally different bicycle culture. At the beginning, she felt quite exotic on her bike in the midst of so many non-bike road users. She also recalls that there were significantly fewer options for parking her bike there. Practical features such as the “turquoise iron bars in Graz” were nowhere to be found. Then her view was turned completely on its head. “If I hadn’t had a bike in Forlì, then I’d have gone everywhere on foot. But that wouldn’t have been so remarkable, because most people do that and you don’t see many people on bikes there.” Evelyn soon came to regard cycling there as a wonderful activity almost like taking a trip to a bygone age. A cycling scene shaped by old bicycles which are kept in perfect roadworthy condition. A sleepy old town with lots of pedestrians and little traffic, which you can explore at a nice relaxed speed. A positive atmosphere among all road users. And last but not least, the feeling of “clattering over the cobblestones”, which is a little unusual at first, but then goes well with the relaxed mood. However, there is still one for area for improvement in Evelyn’s eyes, namely that “the people in the city should maybe consider cycling as an alternative to going everywhere on foot!”

Bicycle culture in Forlì is largely hidden away from view, only the Giro d’Italia attracts some major attention – this attention or awareness is an aspect in which Graz could be regarded as a positive example and role model. Graz, on the other hand, could also perhaps learn something from the tranquillity, comfort and serenity of the traffic. What is certain is that both cities could benefit from exchanging ideas with one another. Following her positive and exciting experiences, Evelyn has decided to travel the world on her bike in the future and get to know other new cities first hand. Her next destinations will be in Austria: Vienna and Linz, two urban centres with a lot to offer for cyclists.

Bike polo: “I became addicted to this sport”

Could the Irishman Richard J. Mecredy have foreseen that? In 1891, so say the history books, he started hitting balls into a goal using mallets for a laugh. Nowadays, bike polo is an international, upcoming urban sport which is played by thousands of enthusiasts worldwide.

Cycling Proficiency Test: When you cycle alone, you have to do everything yourself

The cycling proficiency test and the first cycling trip alone are important rites of passage for both children and their parents. In Austria, children can be entered for their cycling proficiency tests from the date of their tenth birthday. After passing the test, they can be seen happily brandishing an official certificate which sanctions their new-found freedom. This is an achievement which makes everyone feel very proud. So, is it now time to head off on the road? The following interview with 10 year old Amélie will awake memories and provide encouragement for both parents and children.
Interested in our Magazine?
Browse through it now
share article
This website uses cookies to improve your experience. Find further information in our privacy policy.
With your consent we also use cookies (e. g. from Facebook or Instagram) that allow us to provide advertising that fits your interests.
Decline Accept