by Guest Author
This is an article written by a guest author from the Bike Citizens community (full profile below). If you also want to share your cycling stories, contact us.
Image © Bike Citizens

Cycling Culture(s) is the main topic in current debates surrounding how to increase the use and social status of cycling as a mode of transportation and why this might or might not work out like expected. Cycling is recognized as an integral part of urban life in the almost mythical cyclocities of Amsterdam and Copenhagen. In cities where the bicycle has not been as integrated the reason given is “cycling is not part of this city’s culture“.

What Is Cycling Culture? And Beyond Cycling, What Is ‘Culture’?

By referring to something as ‘everyday culture’, or ‘Alltagskultur’, one is simply defining the norms of a certain local society at a certain time: normalcy. Is it currently normal in Vienna to ride a bicycle to work? And has it been so in the recent past? No. For many decades the modal share of cycling has been below two percent, and so the social status of a cycling commuter was that of the ‘weird’.

But cultures can change, mostly unnoticed. That is what the socio-scientific approach of cultural studies has dealt with since the 1980s. Cultural contents are produced by the re-production of meanings in the daily practices of the people interacting with themselves, their contexts, surroundings, media, and history. These interactions are complex, various, and sometimes contradicting, and they are not closed systems, especially not in media-influenced times like ours. Through inspiration and the adoption of examples, the reproductions add something new to the old, and this ongoing process – which is culture itself – results in change.

And so Vienna changes. Like many cities in the Western world, our city is reproducing, adopting, and changing its attitude towards cycling. A colorful variety of contributions comprise the current Viennese bicycle culture, and they developed step by step. But how, and why?

The answer is subjective and selective, like every tale of oral history. The author had and has the joy of being part of the described processes. And so the metaphor of new seeds in an old forest is chosen. There were only four old, well-rooted cycling trees in the forest glade of Viennese cycling culture. The oldest one is the sports cycling associations, which began with the Wiener Cyclisten Club in 1883 and at present contribute to a very lively leisure-time cycling culture. The second is the honored cycling advocacy organization of ARGUS, founded in 1979, and the third is cycling messenger companies, which have existed locally for twenty years. The final ‘tree’ is made up of the many cycling and sports shops which provide the accompanying hardware, as nearly every Viennese owns a bike, even if most only use them for the occasional weekend trip. 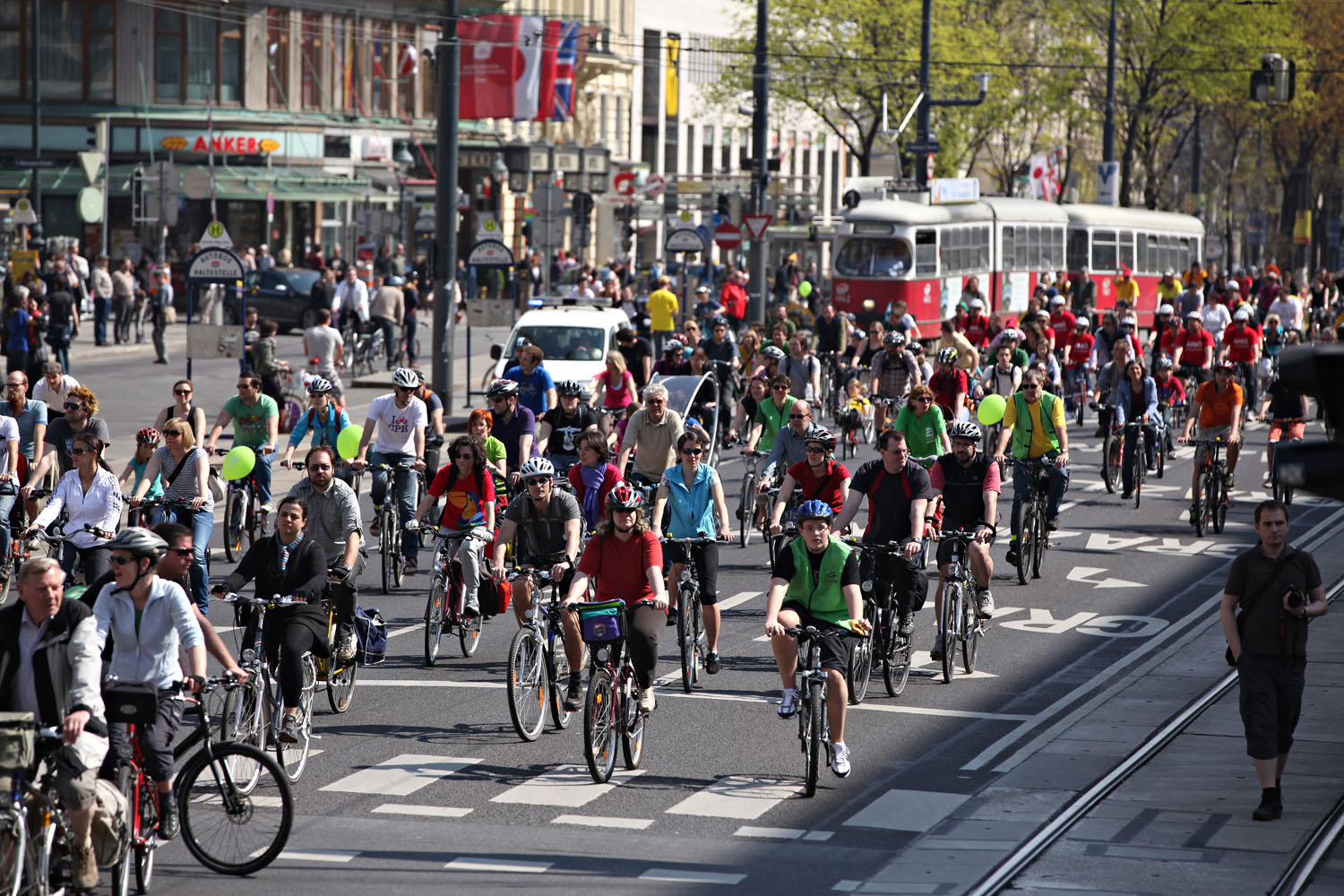 This photo of the annual bike parade represents the growing bicycle community in Vienna.

These four trees, or pillars, of Viennese cycling culture were joined by the seed of a fifth in 2006, and came by the mechanism of reproduction and adoption of external ideas transferred by media. Its well known name is Critical Mass and the late date for its planting was spring 2006. As these things often do, it started small and needed the energy of some few dedicated persons to grow steadily. In itself, Critical Mass as a monthly demonstration of the will for cycling and the joy of cycling might not encourage the masses to think about cycling as their preferred future means of transportation. It has proven everywhere, however, that the community of people that develops through the empowerment of Critical Mass and the creative network that emerges from these monthly meetings of cycling happiness brings a number of powerful contributions to a cycling city. It opens the gates to other sources of inspiration from the cycling world. One year after Vienna’s first Critical Mass ride, local ‘massies’ brought the Bicycle Film Festival (BFF) from New York City to Vienna, and with it loads of new ideas came by these strange pictures on the big screen. Vienna was now ready for additional seeds to add to the growing cycling culture wood.

BFF also worked as a catalyst for new alliances and therefore the next important steps in (re)producing bike culture: the foundation of Vienna Bike Kitchen (a self-repair collective and meeting place) in 2008, and the launch of the first issues of Velosophie, a magazine for cycling culture which developed into one of the most widely read cycling mags in German-speaking countries. In 2009, the cargo bike came to Vienna when the delivery company Heavy Pedals was founded. In 2010, the fixed-gear-bike-boutique FixDich added London-style hipster hype, the Vienna Cargo Bike Collective made fuel-free transportation of goods available to everybody, Bike lobby IGF established monthly ‘Community Bike Film Nights’ for free, and cycling schools opened to bring people back on the bike and to give them the skills and confidence to ride safely in traffic. The inevitable picture machine of Cycle Chic found its local Viennese platform in 2011, and the same year 8,000 people conquered the Ringstrasse with the first Bicycle Parade. In 2012, the cycling NGOs ARGUS and IGF joined forces to become Austrians bike lobby, the city administration’s Vienna Cycling Agency opened the doors of the temporary Bicycle House, and the former Bicycle Film Festival became the Radkult Festival Vienna in order to showcase all aspects of Vienna’s cycling cultures.

What was for so long a small wood has quickly developed into a large, diverse, and fertile forest. One in which the processes of reproduction and inspiration will hopefully go on to integrate cycling cultures into everyday culture, until cycling is so common and becomes as normal and invisible as a simple tree in the jungle.

More and more cities nowadays are making plans to improve their cycling conditions. With sustainability becoming increasingly popular, cities are looking for green transport solutions, and the bicycle fits perfectly in that image.
Interested in our Magazine?
Browse through it now
share article
This website uses cookies to improve your experience. Find further information in our privacy policy.
With your consent we also use cookies (e. g. from Facebook or Instagram) that allow us to provide advertising that fits your interests.
Decline Accept