Who? Where? When and How? – Don't worry! Just read on to get all the essential information you need to know when cycling in Graz.

Graz – the home town of Bike Citizens. Of course, we want to start our “Bike Citizens Guide to …” series here. Located in the heart of Styria in southern Austria, almost 270,000 inhabitants, relatively flat, little wind: actually, an ideal biking city. Also perfect for fair-weather cyclist, because even in the winter, we have hardly any snow (which the snow cyclists might not be too happy about. If there are any). Anyway, there are few excuses to not ride a bike in Graz.

The city of Graz has a vibrant bicycling culture and scene. A lot happens here – you just have to know where you can find out about it. In addition to Internet portals and social media, some things in Graz are still – purposefully – analogue. So it’s good if you know the places where the bike community get together.

Regarding the bicycling infrastructure (apart from the bicycle path network and the traffic situation), a lot has been done in recent years. Anyone looking for cargo bicycle rentals, socio-economic workshops and bicycle repair shops in Graz will find them. The Graz bicycle path network is certainly better than in many other cities. But Graz can be “tricky”, too, and many solutions are Austrian (in other words: half baked).

Where can inclined cyclists meet new bicycling enthusiasts, become informed about events or share tips and tricks about bikes? There are currently two places, where you can get lots of information about cycling in Graz: One long-established institution and one new, ambitious project.

The Graz Fahrradküche (Bike Kitchen) – affectionately called the FaKü – is an ideal starting point for bicycle enthusiasts. Here, you can repair, disassemble or modify your bicycle yourself with expert personal supervision. Everything you can imagine (and more) is done here. Now and then, there are even workshops here – for example, about welding or lacing wheels with spokes. While repairing and tinkering, it’s easy to start up a conversation, and in the bike kitchen, there’s always someone who can give tips about events. The FaKü is located at Schiessstadtgasse 40, is open every Thursday starting at 5:00 p.m. clock and closes some time after that.

In spring 2015, a new bike café opened in Graz. The Culture Exchange is, like its big sister from Novi Sad, an open space of urban bicycle culture. It’s a place for all sorts of different things. It’s a restaurant, a café, a gallery and a library, as well as a place for workshops, music and events. In addition to selling and renting bicycles, a Bike Kitchen, to be open daily, is also planned to be added here. Even the Graz bicycle messenger service Veloblitz has found a new home here. The Culture Exchange is located at Grazbachgasse 47. 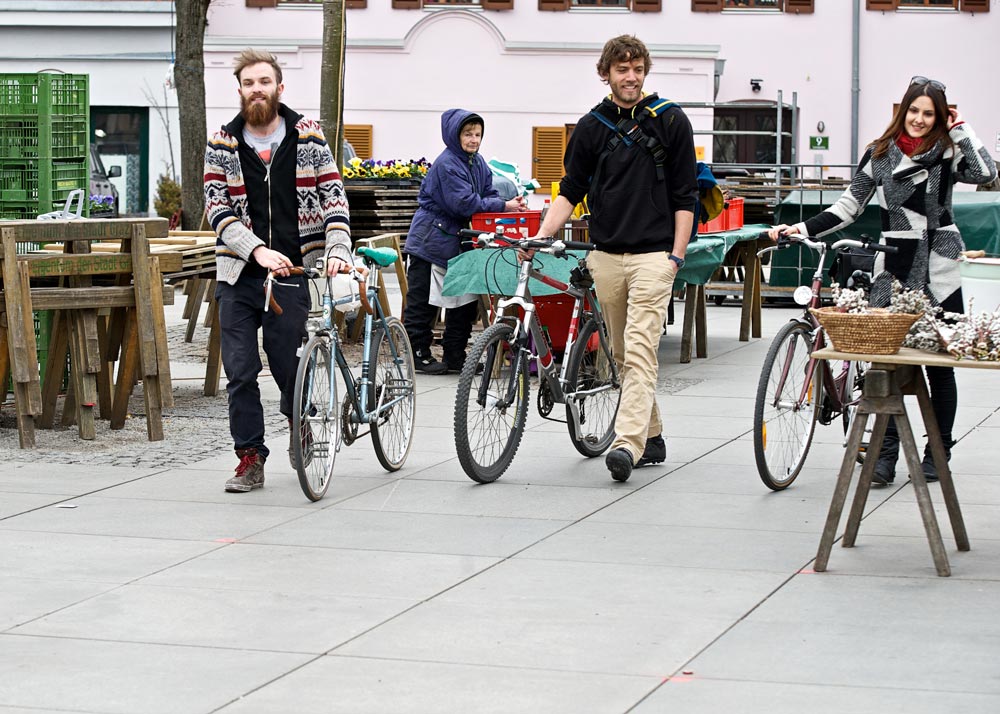 A set date each month for the community is the Graz Critical-Mass. Every last Friday of the month, people meet at 4:30 p.m. at am Sudtirolerplatz at the Kunsthaus. It all starts at 5:00 p.m., and you begin riding for a few hours on randomly selected routes through Graz. At the end of the CM, smaller events are also organised every now and then. There was already Tallbike Jousting in the summer, roast chestnuts in autumn and Bicycle Film Night in the winter. You can find monthly information at the Cm-Graz Facebook page.

The Altbaukriterium (old building circuit race) , established by Muchar, is a bicycle race through old residential buildings. It has come to be organised in several countries, but it originated in Graz. There have already been races regularly in Graz since 2010, including the World Cup.

Whoever doesn’t know about Graz Bike Polo and has never tried it should definitely stop by. With wheels and self-made polo sticks, the players try to get the ball into the goal. Outdoors in the summer and in the youth centre Explosiv in the winter months, every Tuesday from 8:00 p.m. to 10:00 p.m.

Once a year, the Graz bicycle scene pedals to Maribor: The whole event is called Grazibor and was launched as part of Cultural Capital Maribor in 2012. What was planned as a one-time event has now become a benchmark. Every January, it heads to Maribor under a new slogan.

It is said that there are also alleycats in Graz. Rumour has it that information about these mysterious events is passed around in the community of bicycle messengers.

In addition to the Fahrradküche and the Bike Kitchen, where you can repair your bicycle for free or for a small donation, numerous workshops and bicycle shops also perform repairs. Here are the most important addresses:

Bicycle is a socio-economic enterprise which has been offering work and qualifications for young people since 1989 and which, at the same time, is committed to sustainable urban development. Bicycle is located at Rechbauerstrasse 57 and Körösistrasse 5.

Rebikel at Keplerstrasse 55 is also a “social business” – here, reusing and recycling is what’s important, as the name suggests. Wheels that would otherwise have been scrapped are repaired and resold here. Accordingly, you can also buy used and not just new spare parts here.

Somewhat hidden behind the headquarters of the Graz bicycle messenger service Pink Pedals at Griesgasse 24 is the workshop “Lemur – Bike and Bones”.

In the Radlerei at Kopernikusgasse 27, where old bicycles are brought back to life again, you can also have your bicycle repaired.

Additional addresses for bicycle repairs include the long-established operation Radsport Vychodil (since 1955) at Elisabethinergasse 15, Drahtesel Graz at Schönaugasse 43 or Heels on Wheels at Wickenburggasse 7, which specialises in women’s bicycles. 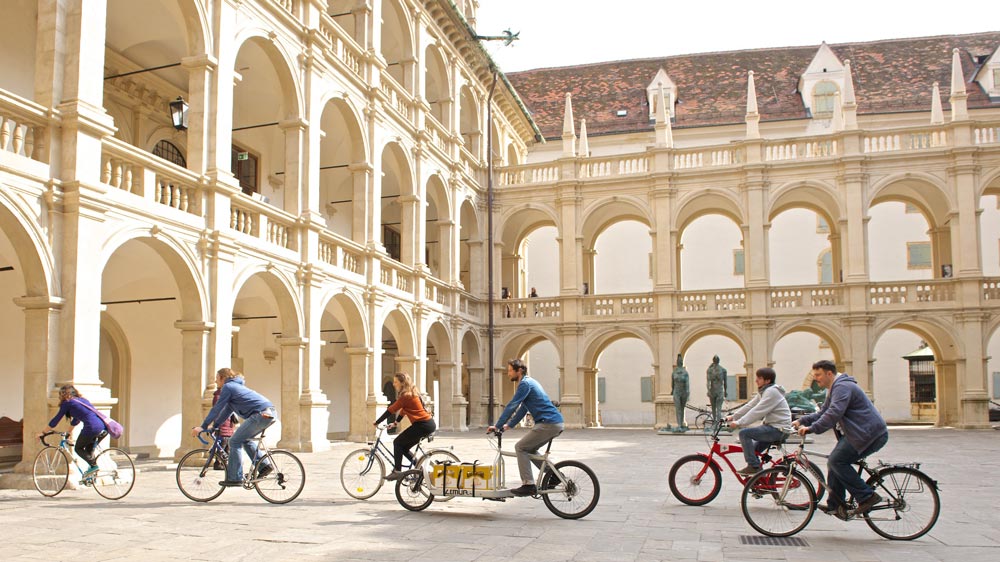 Grazbike.at is a platform that combines the most rental locations for all different types of bicycles. The uniform bicycles can be borrowed and returned at all 14 rental locations. You pay ten euro here for the rental of a city bicycle for 24 hours.

Rebikel also has a special arrangement for students. Here, you can buy bicycles by the semester which, if well taken care of, will be repurchased at a rate of 50% of the purchase price.

Whoever needs a cargo bicycle for settling in or for larger purchases is in good hands with Das Lastenrad. Just register and mark your entry in the on-line calendar, and the e-cargo bicycle can be borrowed free of charge. The cargo bicycle rental at the Graz Student Union is similar: Just fill in a form, deposit 30 euro and you can get going.

For anyone who has children and only travels by bicycle now and then, the child trailer rental of the Graz Grünen is recommended. For a deposit of 100 euro, you can pick up the trailer at the branch of the association Bicycle at Körösistrasse 5.

Overall, the traffic conditions for the everyday cycling in Graz is OK. But there is still a lot to be done. Cases like the bicycle path Grazbachgasse – a good example of one of these Austrian solutions – show that there is a need to catch up in the planning and construction area. The bicycle path here between Jakominigasse und Klosterwiesgasse runs along the sidewalk, while cars drive on two lanes and another row of parking spaces would be there.

The main arteries
From a cyclist’s perspective, one can think of the city as having two main axes. These two main axes are the biking trails running north-south and east-west.

The fastest north-south connection is undoubtedly Murradweg. With few traffic lights, you can more along here quite quickly. You have to be careful, though, because this bicycle path is also unfortunately shared with pedestrians in many sections. Especially between the Hauptbrücke and the Keplerbrücke, it can get tight, because of all the pedestrians. Moreover, this is the main line of the bicycle commuters from the north of Graz.

The main artery from west to east runs over Eggenbergerstrasse – with generous bicycle and pedestrian ways – and splits at the main train station into Annenstrasse and Keplerstrasse. Annenstrasse, where there is actually no bicycle path but where the traffic has been greatly reduced, is virtually the gate in the city centre. Over Keplerstrasse, you can go around the many branches and vehicle bans of the old town and over Wickenburggasse, past the university, in the direction of Mariatrost.

Apart from these main arteries, there are a number of other bicycle routes, but in most cases, you share the road with motorists, which generally works quite well in Graz. Care should be taken here, of course, but the Graz motorists are at least used to cyclists. But some parts might be a little tricky.

Tricky
In general, you should avoid the big main roads. In most cases, there are alternatives over less travelled roads and with fewer traffic lights, where you can usually move ahead a lot more quickly. Whoever still uses the big roads should keep to his place in order to avoid dangerous situations.

Some areas and routs in Graz are especially tricky, though, and deserve special mention:

Joanneumsring: a bicycle path has already been requested long ago, but nothing has happened so far. If you know how, though, the route is easy to get around (via the Eiserne Tor and Stubenberggasse), even if you have to sacrifice a little speed. Of course, you can still ride your bicycle, but you should keep in your place here, as well.

Griesplatz – Jakominiplatz: Only drivable with large detours, because here, you have to follow the one-way system of the cars. Unfortunately, a proper connection for cyclists is lacking here. This is characteristic anyway, though, since Griesplatz is a traffic engineering stepchild and really just a hub for car drivers.

Many streets and alleys of the old town are pedestrian areas. If you ride through the city by bicycle, you should keep your eyes open for where you are allowed to do so. This is monitored by the Graz “Bicycle Cops”, especially in the summer.

The same applies to the Stadtpark: Only the ring around the Stadtpark and the paths along the roads may be travelled by bicycle. In spring and summer, the Graz “Ordnungswächter” monitor this in the Stadtpark.

With these brief guidelines, you are already well underway in Graz. Check out the Fahrradküche or the “Culture Exchange”. Ride along in the Critical Mass or try Bicycle Polo and the Altbaukriterium. It will certainly have been a rewarding experience. If you ride a lot and explore Graz on your own, you will be rewarded many times over. Finally, the following applies: When there’s time, there’s bicycling. You have to find the best shortcuts, hidden paths and routes with just you and your bicycle.