Who? Where? When and How? – Don’t worry! Just read on to get all the essential information you need to know when cycling in Rotterdam.

by Michael Afanasyev
I was born in the Soviet Union, lived in Israel for many years and since 2003 I live in the Netherlands, in Rotterdam. Geophysicist by training, I am doing a PhD at the Delft University of Technology. In my family, we own 7 bicycles between the four of us, so as you can imagine we cycle quite often. I pedal to work, to the store, to the park with the kids, for sports or just for fun. I love cycling and I enjoy writing, so I combine the pleasures of both.
Photo © Michael Afanasyev

In 2015, Rotterdam, the second-largest city (630.000 inhabitants) of the Netherlands, has finally stepped out of the shadow of the Dutch capital as a tourist destination in its own right. And now it quickly gains world fame as a cycling city. For those unfamiliar with the Netherlands, it is difficult to realise how much cycling is a part of life here. Writing about Dutch cycling culture is like trying to write about the pubs of Dublin, or the café culture of Paris – a mission (almost) impossible. The sheer volume of cycling in Rotterdam is staggering. 80% of people own a bicycle, 160.000 (25%) Rotterdammers cycle daily, and another 200.000 (32%) cycle on a weekly basis. Every day, 560.000 cycle trips are made in Rotterdam and bicycle use has increased by 60% over the past decade.

The amount of cycling-related groups, events and activities in and around Rotterdam is dazzling. One event that deserves a special mentioning is the Ronde van Kattendrech, held annually in May. In its core a racing event, it has grown into a full-blown cycling festival, with shows, movies and social events. The rise of the fixed-gear subculture is reflected in the growing number of groups like Figero and Rotje Rond, that organises a fixed-gear race every Friday 13th (e.g. May 13th 2016). Rotterdam is working on an ambitious plan to improve cycling even further. The first result is the establishment of Fietsfan010 (in Dutch) – the online platform for cycling Rotterdam, full of tips about events such as bicycle fishing, or the latest cycling cafe. In short – cycling is BIG in Rotterdam, and is set to become even bigger – here’s our guide to how to be a part of it.

If you are a visitor to Rotterdam, and want to explore the city by bike, let us first congratulate you on making a wise choice. Visitors often say they underestimated how wide-spread the city is, and that it is challenging to see a lot of it by foot. Many commuters use the OV-Fiets, the national cycling add-on to the public transport system. Register once, and you can pick up the recognisable yellow-blue bicycle at the main train and metro stations, for just €3.25 for 24 hours (plus €10 annual fee). There are numerous other bike rental outlets in Rotterdam, many of which offer electrical bicycles as well – just have a look at bimbimbikes and choose your favourite.

As you might expect, there are countless bicycle shops in Rotterdam. Piekfijn, on Mariniersweg 255, is a second-hand department store that sells reasonably priced used bicycles. RestoRokus, on Goudsesingel 212, specialises in sales and restoration of classic bicycles. Juizz, on Mariniersweg 38, is all about E-bikes. And, of course, there’s Bikers’ Best, on Noordsingel 3, the place to be for high-end sports bicycles. For simple repairs, the Royal Dutch Touring Club ANWB maintains 1200 service points around the country, where a free toolbox is available. Two of these are in the centre of Rotterdam – at the Stayokay hostel and at the Nivon Friends of Nature society. For more complex repairs, a good starting point is the ‘Do-it-yourself Workshop’ – a free workshop space, where tools and materials are available.

In and around Rotterdam, an unlimited number of cycling routes is available, and numerous websites are dedicated to sharing cycling routes in the Netherlands. Many local companies offer guided cycling tours. For self-guided exploration of the waterline, there’s an excellent 28 km Nieuwe Maas Trail, following the river banks in the city. Bridges and ferries along the route offer short cut opportunities, and it takes the visitor along some of the city’s most iconic sights, like the Rijnhavenbrug pedestrian and cyclists bridge. Opened in 2012, it was immediately nicknamed in a typical Rotterdam fashion, and is known as “De Hoerenloper” (“To the hookers”), referring to the former red light district in Kattendrecht. De Hoerenloper created an easy cycling connection from Kattendrecht neighbourhood to the city centre, and the resulting hipsterisation of Kattendrecht is a perfect example of how cycling infrastructure contributes to urban life quality (the hookers are long gone, by the way). 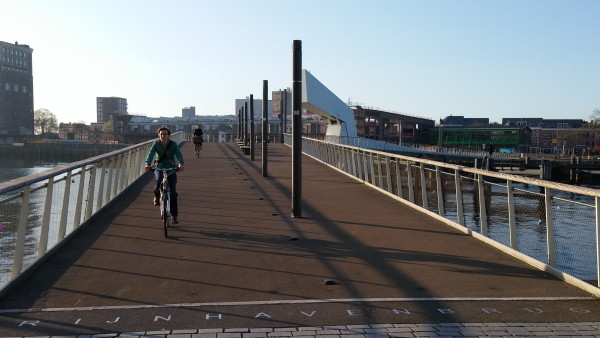 Increasingly, Rotterdam is connected to neighbouring cities by so-called cycling highways. The existing bicycle paths are being straightened and widened and obstacles are being removed. To the North, Rotterdam is linked to The Hague by a route that follows the old waterways. Following this route is like cycling back in time, starting in the 21s century at the futuristic Central Station of Rotterdam. The 30’s come to life at the sight of the Van Nelle Factory, one of the most beautiful buildings in Rotterdam, and recently inscribed on the World Heritage List. The 19th century rocks you on its cobblestoned streets as you past Overschie. Mansions and farmhouses along the Schie canal are a continuum into Delft and its Medieval church towers, which are visible from the Kandelaar bridge, near De Zweth. From Delft it is possible to continue to The Hague, and return back to Rotterdam via the historical route, past the Ackerdijkse Plassen wetland area. 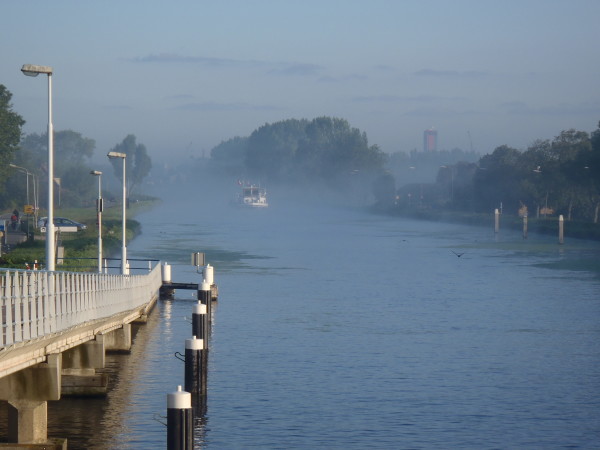 The beautiful view from the Kandelaar bridge. Photo © Michael Afanasyev

To the South, Rotterdam is connected to Dordrecht by the so-called F16 bicycle highway. Theoretically, this route should enable the commuter to cycle fast and smooth from city to city. In reality, the route is there, but the “fast and smooth” part is still on paper, for the most part. Fortunately, there is an alternative solution – the Waterbus. It’s the coolest public transport Rotterdam offers. Take your bicycle (free, no charge!) on board of one of these sleek-looking modern, comfortable catamarans, and a comfortable hour later you can roll off in the centre of Dordrecht. Other destinations of the Waterbus include the famous windmills of Kinderdijk and the Biesbosch – a unique freshwater tidal wetland, all with the comfort of taking your bicycle with you. 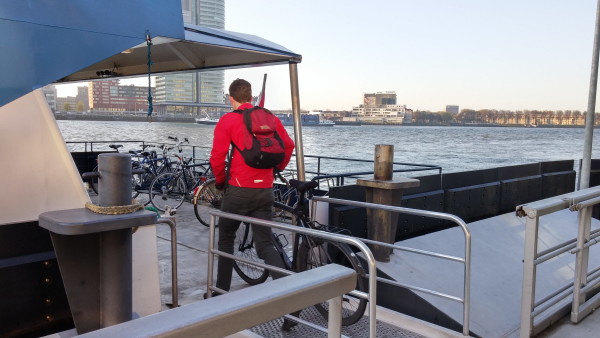 Up and Down the River

Rotterdam is named after a dam in the river Rotte, right where the city market is today. Cycling Eastward up the Rotte is a popular recreational route, best experienced on Saturday or Sunday morning, before the crowds. Due to land subsidence, the river flows 3-4 meters above the surrounding fields, a rather weird sight. The full track, all the way to the beginning of the Rotte and back is about 40 km. The Rotte is crossed by a multitude of bridges and even a tiny ferry (running April to September), so you can cross at almost any point and go back on the other bank. A word of warning – mind the wind. It usually blows away from the city, so you might find the way back taking twice as long. 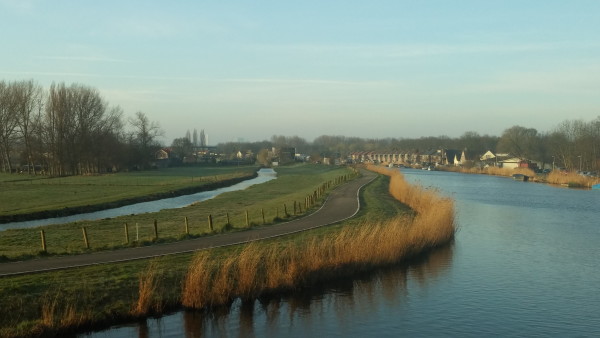 The Rotte, flowing above the landscape. Photo © Michael Afanasyev

Going in the opposite direction, Westward, it is easy to follow the Niewe Maas downstream, passing the giant windmills of Schiedam, the classic Dutch town of Maasluis and the enormous Maeslantkering storm surge barrier. After 35 kilometres you can dip your toes and tires in the North Sea. As this is the final (or the first) stretch of the long-distance cycling route along the Rhine, this route has an added benefit of getting a taste of the Big Thing. At Hoek van Holland, you and your bicycle can hop on a ferry across the water to FutureLand, the excellent information centre of the Maasvlakte 2 deep sea harbour extension. Try to spot the seals as you cross! Cycling from Hoek van Holland to Rotterdam is usually easier with the fresh wind from the sea pushing in your back! The route can be halved by taking the train either way (replaced by the metro in 2017 – bicycles can be taken non-charge).

Rotterdam has big plans for its cycling infrastructure. In 2017 GoBike will offer 20 docking stations with 450 electric rental bicycles, for just €2,50 Euro per two hours. But the best thing is, that Rotterdam realises very well that caring for cyclists means many small improvements, designed to make cycling easier. This is well demonstrated by the most recent innovation, and a unique feature of Rotterdam – the free children buggies, that are available at the guarded bicycle parkings in the city centre. The buggies are meant to help parents with children to cycle down-town, instead of driving. This is truly the way forward, and something other cities can and should learn from.

Further Information and Other Routes

Information in English is available at https://www.route.nl and www.hollandcyclingroutes.com. If that gets you craving for more, you can turn to Dutch websites, most are self-explaining even if you don’t know any Dutch. Country-wide coverage is provided by www.fietsen.123.nl, and good regional routes are listed at www.zuidhollandslandschap.nl.

by Michael Afanasyev
I was born in the Soviet Union, lived in Israel for many years and since 2003 I live in the Netherlands, in Rotterdam. Geophysicist by training, I am doing a PhD at the Delft University of Technology. In my family, we own 7 bicycles between the four of us, so as you can imagine we cycle quite often. I pedal to work, to the store, to the park with the kids, for sports or just for fun. I love cycling and I enjoy writing, so I combine the pleasures of both.

The Ultimate Guide to Commuting by Bike

Are you thinking about switching from sitting in a car every day to going by bike? Do you have friends who swear by cycling to work in all weathers and rightly ask yourself, “How does that work?” But do you still not have enough information or arguments to make the switch, or have questions that your cycling colleagues couldn’t answer? Then you’ve come to the right place.

Weight loss through cycling: Can your daily commute keep you in shape?

Diet and exercise fads come and go with few of them creating long lasting benefits. The only way to lose weight and keep it off is by making sustainable lifestyle changes. Professor Gary Foster from the University of Pennsylvania found that sixty-five percent of dieters regain the weight lost within three years.

Bored with your commute? PLAY & BIKE to WORK with Bike Citizens

The daily commute is an everyday reality for millions of people. Keen cyclists have known for years that cycling is a great way to get to work, and right now more and more people are discovering how much fun it can be. In autumn 2020, Bike Citizens will launch the global “Play & Bike to Work Campaign”, which aims to show how cycling can make commuting fun and invigorating – even in the winter. Because no matter where you live, how far you cycle to work every day or how fast you pedal, anyone and everyone can do it!
Interested in our Magazine?
Browse through it now
share article
This website uses cookies to improve your experience. Find further information in our privacy policy.
With your consent we also use cookies (e. g. from Facebook or Instagram) that allow us to provide advertising that fits your interests.
Decline Accept