Why Helsinki is also worth a visit in winter

Welcome to Helsinki in winter! Chances are you are one those people who, when in a new city prefer to get around the sights riding a bike. Well friend, consider this article as your tutorial to some of Helsinki´s nicest wintery sights. And don´t worry - winter riding is not hardcore sport or rocket science, it´s just normal everyday commuting with warmer clothing and wider tires.

by Markus Seppälä
Markus Seppälä is an invasive species biologist who has lived in Helsinki all his life. He has a burning passion for anything and everything cycling related. He was former project manager and designer for Box Bike Helsinki.
Helsinki Baana in winter. Foto: CC0

For me, riding my bike during the cold and dark winter months is simply a very Finnish thing to do. Let me try to explain; Simply because some, usually older people view it as foolhardy, unsafe or even unnecessary, that is all the reason I need to go out and ride as much and as often as possible, no matter what the weather or time of the year. I know, it sounds like pure stubbornness, but in the very best sense.

It has been an absolute joy for me over the years to see more and more similarly stubborn people riding the streets with me. People are starting to realise that riding your bike is more than just a fun summer hobby, it is a perfect way for commuting around town while keeping yourself in good physical condition.

Nice places to ride to in Helsinki

Helsinki is filled with interesting places and sights to visit, and here is my pick of a few of the nicer ones near the centre and along the beautiful coastline. You could say there is a certain theme to them, because I have chosen to show you all the historic and idyllic old Market halls. Check them out as a tour which you can access in your Bike Citizens app. I recommend discovering the rest on the Helsinki´s official tourist site, Visithelsinki.fi.

We start the tour at the very center, in front of The Central Railway Station, and start riding north along the Töölölahti Bay and make our way across Mannerheimintie road to Töölö.

Our first stop on the tour is the Sibelius Monument. The monument was built in 1967 for honoring Finlands national composer, Jean Sibelius.

And then the real reason why we started with Sibelius: Cafe Regatta. 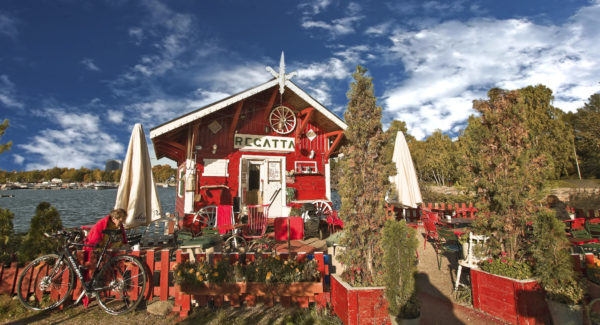 It is a strange and extremely lovable little cafe right by the sea. It is difficult to explain what makes Regatta so special, and astonishingly well regarded in Tripadvisor reviews. Regatta is open all year round, from early morning to 9 pm. The cinnamon buns are divine. You have to go and see it for yourself.

Riding yet further south from the market, we soon reach a real treat in located at the sea next to Hernesaarenranta Road. You, my friend, represent one of two kinds of people on Earth; one who has experienced the Finnish Sauna or the one who has not. If you belong to the latter group, you are in luck! You can experience your first time in one of the most world-renowned saunas, Löyly, right here in Helsinki. I highly recommend you make a reservation in advance to make sure you get in – I hear it is quite popular.

After the invigorating sauna experience, it is time again to get on that saddle and head onwards! From Löyly we continue along the gorgeous coastline towards our next stop, and marketplace – The Old Market hall.

Helsinki Cathedral. A mandatory stop, of course. The most flamboyant historical church, building and tourist attraction in town. It is almost impossible to resist the urge to take a photo or two here.

Hakaniemi Market Hall. If you are still up for it after the two earlier market tours, go ahead and check out this last one too. There are many cafe’s plus meat, bakery and other specialist delicatessen shops in two floors.

Still have energy in you? Do you like to skate? Well, you can do just that in the large square right next to The Central Railway Station. In Ice Park you can rent skates and afterwards have a nice hot chocolate in the cafe by the rink.

That’s the end of the tour folks. It will most certainly take you one whole day, or if you like you can spread the tour to last you for two. Go and have fun.

Some tips before you hop on the saddle

In December the sun rises after 9 am and sets well before 4 pm. On cloudy days it will probably still be pretty dark, especially if there´s no snow on the ground. So plan to take your sightseeing photos with flash or longer exposure time.

Like in Germany and many other European countries it is mandatory by law to use lights on your bike during dark (white in front and red at the rear).

It is good to plan your routes

Helsinki has over 1200 km of bike lanes and paths, and the city is gradually building a high quality network of dedicated cycling highways, or baanas (from the german bahn). In the centre there are some areas with lots of one-way streets, and some peculiar streets can be even considered “cycling-unfriendly” due to car-oriented planning choices. In order to get you smoothly around Helsinki, I can highly recommend using, alongside Bike Citizens navi app of course, our local Journey Planner -service, which you can also use for public transportation. You can have the planner set up optimal routes using only bike lanes and paths, view all the sights on the map or even follow other pre-planned routes, like the Helsinki Scenic Route.

In any case, take the opportunity to ride at least once the “Baana”, our highest quality cycling highway built on disused freight train tracks going through the middle of the city center and starting near the Central Railway station.

Being in the south of Finland, it is always possible that there isn´t much snow in Helsinki during the whole winter, although the last three winters we have seen plenty of snow. After a proper snowfall, it might take the city´s winter maintenance machinery some time to come and clear the cycling paths and lanes with their snowplows.

Enjoy your stay and have safe rides in Helsinki

I hope this article has given you some ideas on how to spend your time in Helsinki during your winter, or summer, stay. Helsinki has gone great lengths in becoming a more and more cycling-friendly city, and I hope it shows when you get here and get on that saddle. Take care and ride safe.

How Far Do I Get in Five Minutes by Bike?

Have you ever asked yourself how far your bicycle can take you within a few minutes? Everybody's heard that the bicycle is the fastest means of transportation for many routes within the city, but now, with the new Five Minutes by Bike function in the Bike Citizens online route planner, you can see for yourself just how true this is. Conclusion: Never underestimate the possibilities your bike offers!

All Roads Lead to Happiness

Currently, 7 % of all trips in whole of Europe are made by bike on average. And the good news? There's lots of room for improvement. There’s nothing like the saddle. Not convinced? Just take a look at the following facts:

The Velo-city Global conference 2016 in Taipei tells the remarkable story of how collaboration between industry, civil society and administration can shape a cycling city. The programme of Velo-city Global 2016 Taipei, launched by a bicycle tour with over 2000 participants led by Taipei’s Mayor, will bring together all aspects of cycling right before Taipei Cycle Show 2016.
Interested in our Magazine?
Browse through it now
share article
This website uses cookies to improve your experience. Find further information in our privacy policy.
With your consent we also use cookies (e. g. from Facebook or Instagram) that allow us to provide advertising that fits your interests.
Decline Accept