Our London office made its first appearance at the Spin X-Mas cycle show to check out the cycling trends designed to take the British capital in a stride this year. So what’s next in cycling in the city? Women, it appears.

by Nora Manthey
Born-Berliner turned Londoner, I love to write about cycling and everything around it because it is a movement for change. It makes you happy, too.
Foto: Spin London

So What’s next Trend in Bike Apparel for Cycling in the City?

Women, it appears. When looking around at the show, one trend becomes apparent: young female entrepreneurs making bike apparel for cyclists like themselves. We spoke to five of them about their motivation, hi-tech fibres, and the bike industry.

Clearly, the new bike apparel is born out of need. Almost all the founders said that they simply could not find what they were looking for and thus decided to make it themselves:  Clothing that would look good on and off the bike while functioning as either a protective shield against the rain or as reflective garment that makes you stand out in the dark, preferably both.

Adaptable to your existing wardrobe yet strongly visible is the reflective “armour” by Henrichs. The one-woman brand caters for the whole family, including dogs. The children’s cape got cute wings attached. The wings are cut from the same hi-viz material founder Sara sources from Switzerland. It includes glass fibre and the material is also used for police and firemen vests.

Sara’s motivation to get into cycling fashion is safety which she sees in huge demand as “there is not enough space” on the road. Henrichs mainly sells online and through a few retailers. Not all of them are bike-related, websites for female shoppers are instead. Sara found a difference between men and women’s buying habits. Apparently, guys are “not so much into fashion” but are “easily sold” on functionality.

Henrichs’ capes and collars are inspired by samurais and easily cover a back pack.

Riding Hood and the Parka Cape

Among the youngest of our female entrepreneurs are Imogen (26) and Romy (29) from Riding Hood.
What they call the “Parka Cape” is essentially a British college-style rain cape that ties up into a coat when off the bike.

Their target group are “casual cyclists” who usually ride at a relaxed pace like the founders themselves. All they needed but could not find was something “to keep you dry but makes you wear it at the other end.” The bike industry has been “receptive so far,” Imogen finds, even though Riding Hood aims to bridge the gap between cycling and fashion, trying to get “people on bikes without the gear side.” 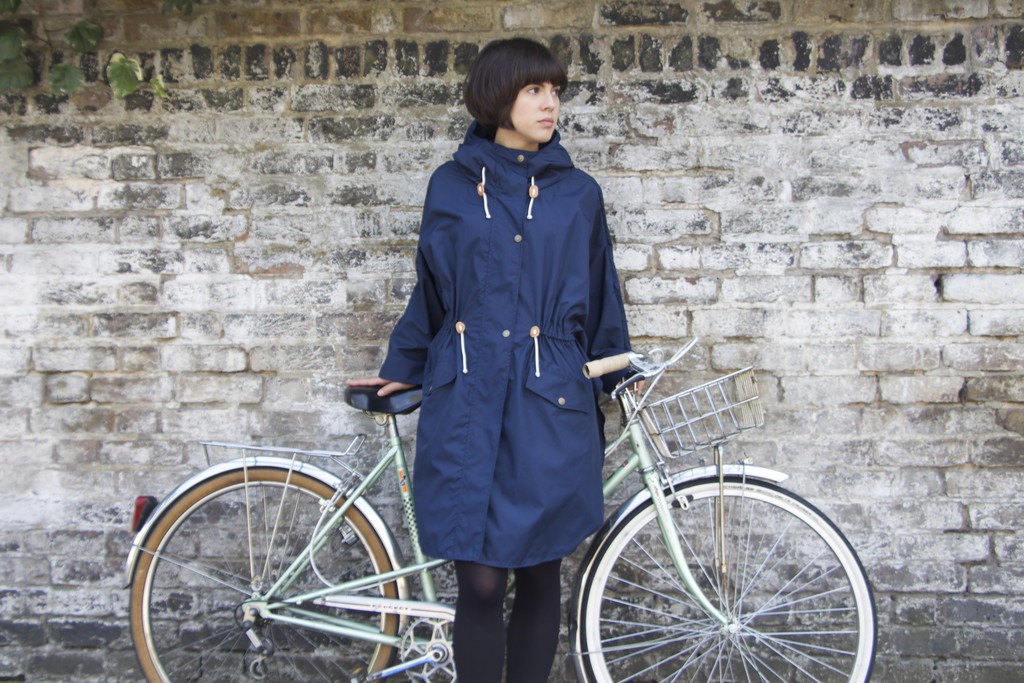 Little green detail: the toggles are made from recycled material from England. Foto: Riding Hood

Carolyne from Velocity has a similar experience as she reports that quite a few men come to her asking for bigger sizes of her trousers with high waist in the back but comfortably low fit in the front.Not a fashion designer but social worker by profession, she works with a local pattern cutter and seeks customer feedback via social media channels.

Carolyne sees her small scale production in North London as an advantage as it gives her the flexibility to respond to demands directly. She is one of the few that consciously stay at a moderate price level. “If I could not produce for a price that I want to pay, I would not do it,” she said. 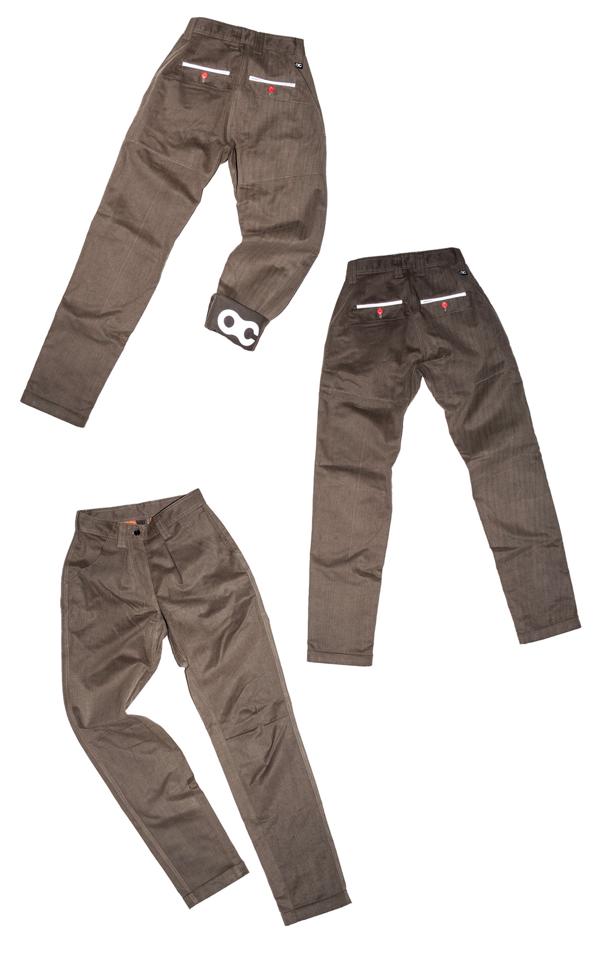 Velocity trousers: Turn the leg inside out and the reflective logo is unveiled. Foto: Velocity Cycling Wear

Hill & Ellis Has a Fable for Accessories

Usually, bike apparel and accessories are something Londoners are asked to pay quite a bit of money for. What you get are often British designed and crafted goods supposed to last for some time like the leather bags from Hill & Ellis.

When Catherine started her business in 2012, the idea was to make pannier bags one could also take into any boardroom or office. After just six months, Catherine quit her job in media and started to solely concentrate on her brand. This fall, she launched a new range that is made in Britain.

Catherine’s advice for her fellow entrepreneurs: “Keep going if you are convinced by your product.” 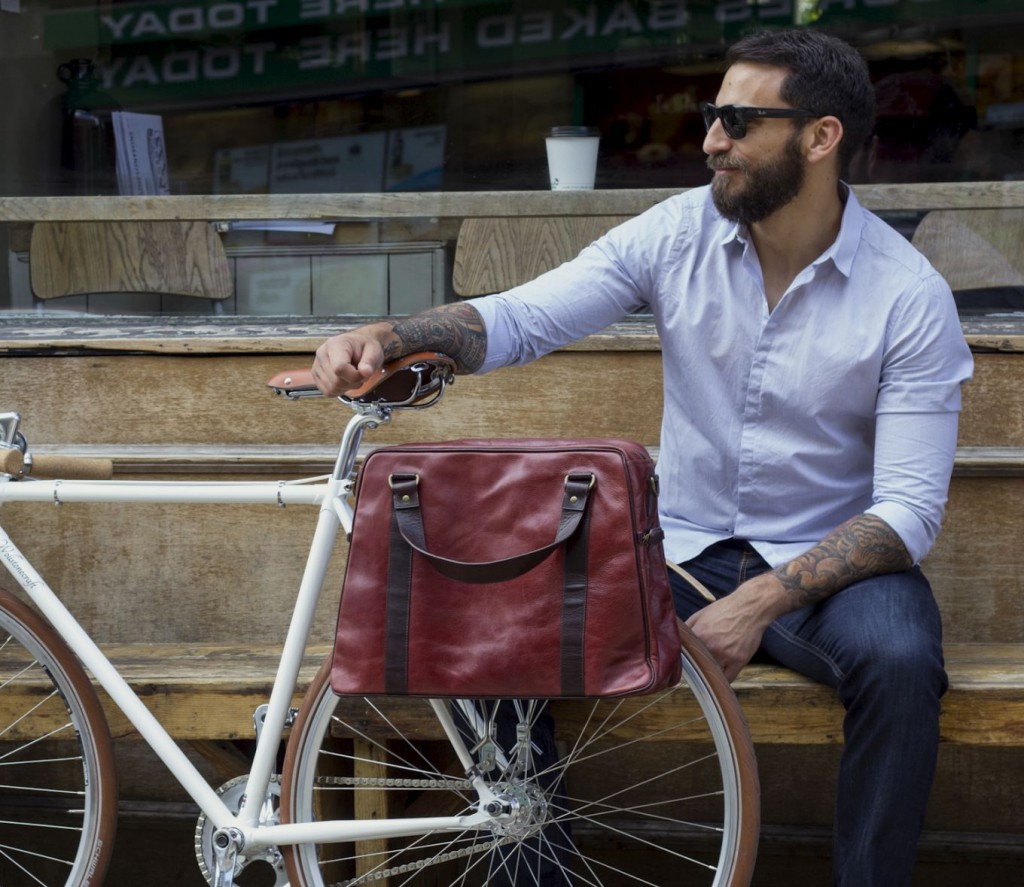 Reflective bits can be turned around to disguise their dazzling nature. Foto: Hills and Ellis

There is No Such Thing (as bad weather) if you got the right gear.

No Such Thing founder Clare got tired of “wearing a men’s cycling jacket ruining (her) every outfit.” A fashion designer herself, she set up a range of women’s cycling jackets this autumn that look smart but do not comprise on performance.

Clare does only black, apart from a white hoodie that reflects all over with the help of tiny glass particles. The rest of what the designer calls a “trans-seasonal range” includes a blazer, trench coat, and a matching silk scarf with reflective hemline.

With a background in ethical fashion, Clare sources her materials carefully and from all over Europe. Her outerwear is made of Sympathex from Germany with a waterproof and non-toxic membrane. In summer, the arms can be removed. The reflective stripes that line the back, sleeves and pockets of the jacket are dark grey so they only reveal their glamour if in the spotlight. 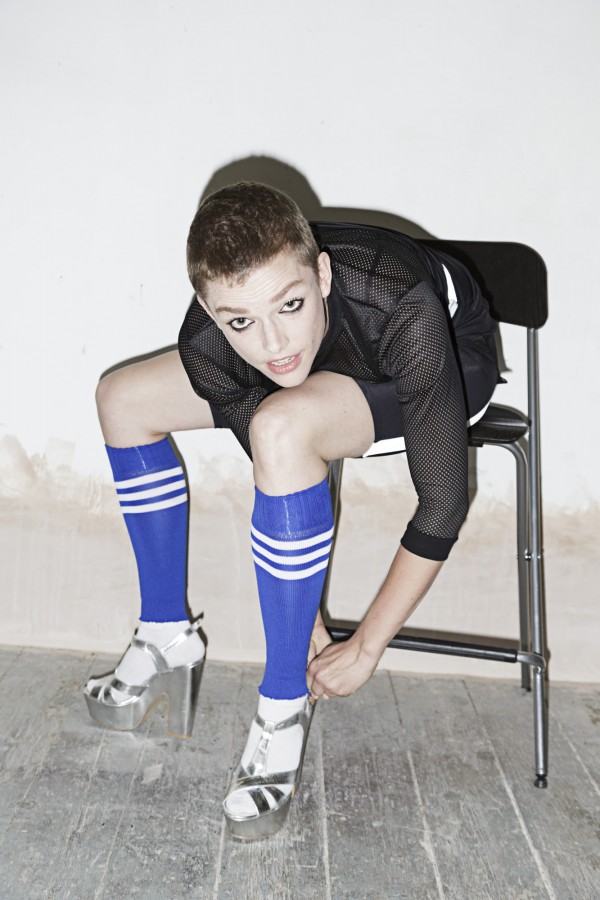 Founder Clare chose to be represented by her model above because “she got real balls” and is a climate change activist. Foto: No Such Thing

Speaking to all these busy ladies, we surely got the impression that cycling in the city is looking at a bright future in 2015. Those of you who like to take to two wheels in style just got a whole new array of functional accessories to chose from.

Which cycling shoes would suit me the best?

Whether you are on the way to an appointment or meeting friends in the park, your outfit needs to be just right. The right footwear is naturally a key element of any stylish outfit. People who ride their bikes every day will certainly have asked themselves at some point whether such a thing really exists. Is there such a thing as the ‘right’ shoe for cycling in the city? Bike Citizens has asked around and has compiled a list of the most important points to consider.

At the outset there was the idea of two cycle messengers in Graz to improve cycling in the city for everyone with an easy-to-use bike app. After the first version of the app (Bike Citizens app) was installed and testing was to start, they faced a challenge: How the hell do you fix a smartphone to your bike handlebars? - Quick and easy, without screws, without it juddering and joggling, just keeping the smartphone save. All the solutions offered on the market were either laborious to install, expensive or simply not thought through. So they proceeded to action.

Folding bikes have the potential to positively influence urban mobility, particularly commuter traffic. The image of a rickety, camping-style curiosity no longer applies thanks to the new models: On-site inspection.
Interested in our Magazine?
Browse through it now
share article
This website uses cookies to improve your experience. Find further information in our privacy policy.
With your consent we also use cookies (e. g. from Facebook or Instagram) that allow us to provide advertising that fits your interests.
Decline Accept