Cyclists the world over are fighting for the same goals and against the same obstacles. It’s high time for the Fridays for Future global bike revolution. But how? Author Tobias Finger analyses the current situation using two fundamentally different city models: Berlin and Vancouver; and gives cyclists hope, courage and options for action!

by Tobias Finger
Tobias Finger studied social sience and works as a freelance journalist in Berlin. Whenever he takes a break from writing, he is riding his bike through the German capital.
Vigil in Berlin © Volksentscheid Fahrrad / Changing Cities

In various locations all across the globe, people are campaigning for better infrastructure, safe cycling and transport policies which promote cycling. As part of this, they are teaming up as activists, pressure groups, grassroots movements and NGOs. They set priorities, raise awareness and fight against obstacles. Always based on the local situation. Different strategies are thus developed, approaches fleshed out and organisations formed. Sometimes safety is at the forefront, sometimes it is environmental protection and sometimes the focus is on quality of life. Yet the motivation remains the same: To improve conditions for cycling and cyclists and to protect the environment! 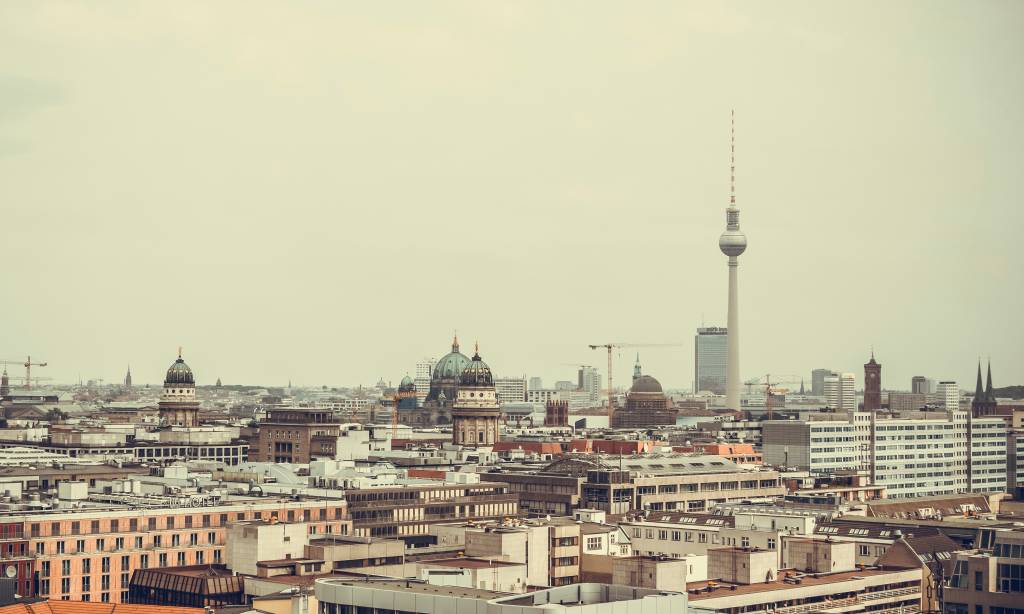 The situation in Berlin, Germany

Organisations are maintaining the pressure. Private initiatives are stepping up the pressure.
The German cycling association Allgemeine Deutsche Fahrrad-Club (ADFC) describes itself as follows: “We’re the cycling lobby”. As such it collaborates with other smaller organisations as a sort of umbrella association and works together with authorities, in order to improve the “legal bases, transport policy and cycling options” all across Germany. The Verkehrsclub Deutschland (VCD), which describes itself as campaigning “for environmentally sustainable and socially acceptable, safe and healthy transport”, takes on a similar role. Thanks to its grassroots structure, it is also more directly engaged and actively plays a role in the local and regional transport policies as an association and through its members.

Initiatives: Bicycle referendums
As well as the two big transport organisations, there are a large number of committed associations and initiatives which each prioritise different issues from nature conservation and sustainability to infrastructure and safety. Yet, it is precisely the focus on a variety of key areas which ensures that they have a collective influence when they team up and work together.

In Berlin, for example, the Bicycle referendum initiative contributed significantly to the drafting of the first German mobility law considered to be Germany’s first “cycling law”. Its vision is of no deaths caused by traffic accidents, billions of euros of investment in safe infrastructure resulting in thousands of people making the switch from their cars to bikes. In a city like Berlin with a diverse transport network and closely-integrated structure, the initiative is calling for extensive urban development measures, separate dedicated cycle lanes and fundamentally more space for cycling including places to park bikes. As such, bicycle parking at junctions could keep away parking offenders and enhance visibility. Started as the pet project of initiator Heinrich Strößenreuther and his association Changing Cities , the initiative gained momentum through city-wide networking, cooperating with civil society players and forming networks at district level. The initiative’s initiators and supporters, in cooperating with the large associations, have also pressed ahead with the project and collectively maintain the pressure on the red-red-green coalition government.

Together with other organisations, they draw up draft laws for safe infrastructure and bring them to the attention of political decision-makers. For example, this takes place as part of the ‘Raddialog’, which involves the Berlin Senate developing concepts for transport policies together with citizens and organisations. And they raise awareness through vigils at the scenes of accidents, with the great aim of not having to hold anymore the following year. 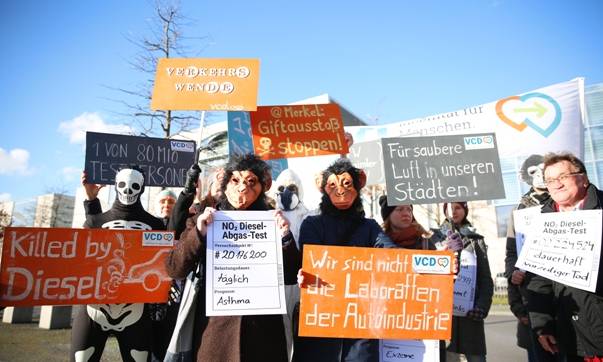 The VCD campaigns for equal access to roads in the city and overall mobility. Environmental protection and health play a decisive role.  © Katja Täubert 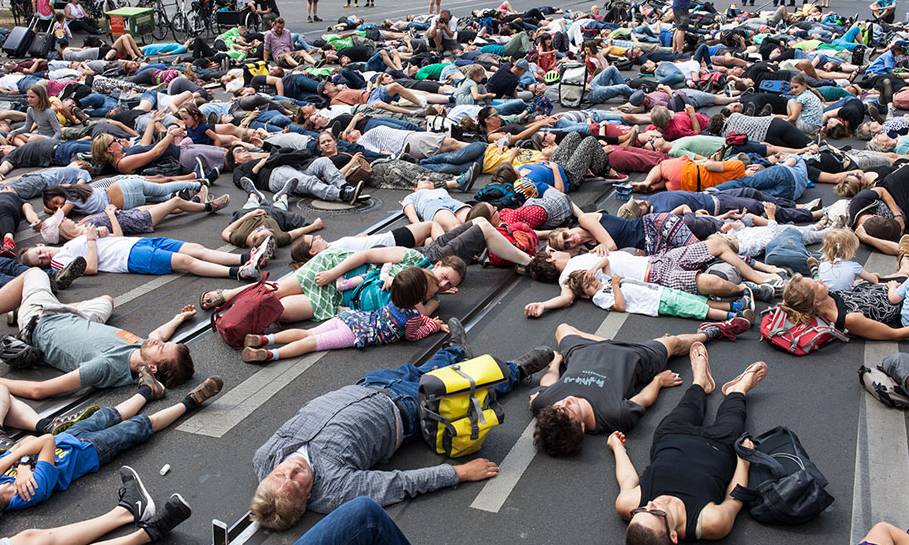 The VCD provides practical tools for how all citizens can take an active lead themselves in the transport revolution. Here you can see a peacful “die-in” © VCD 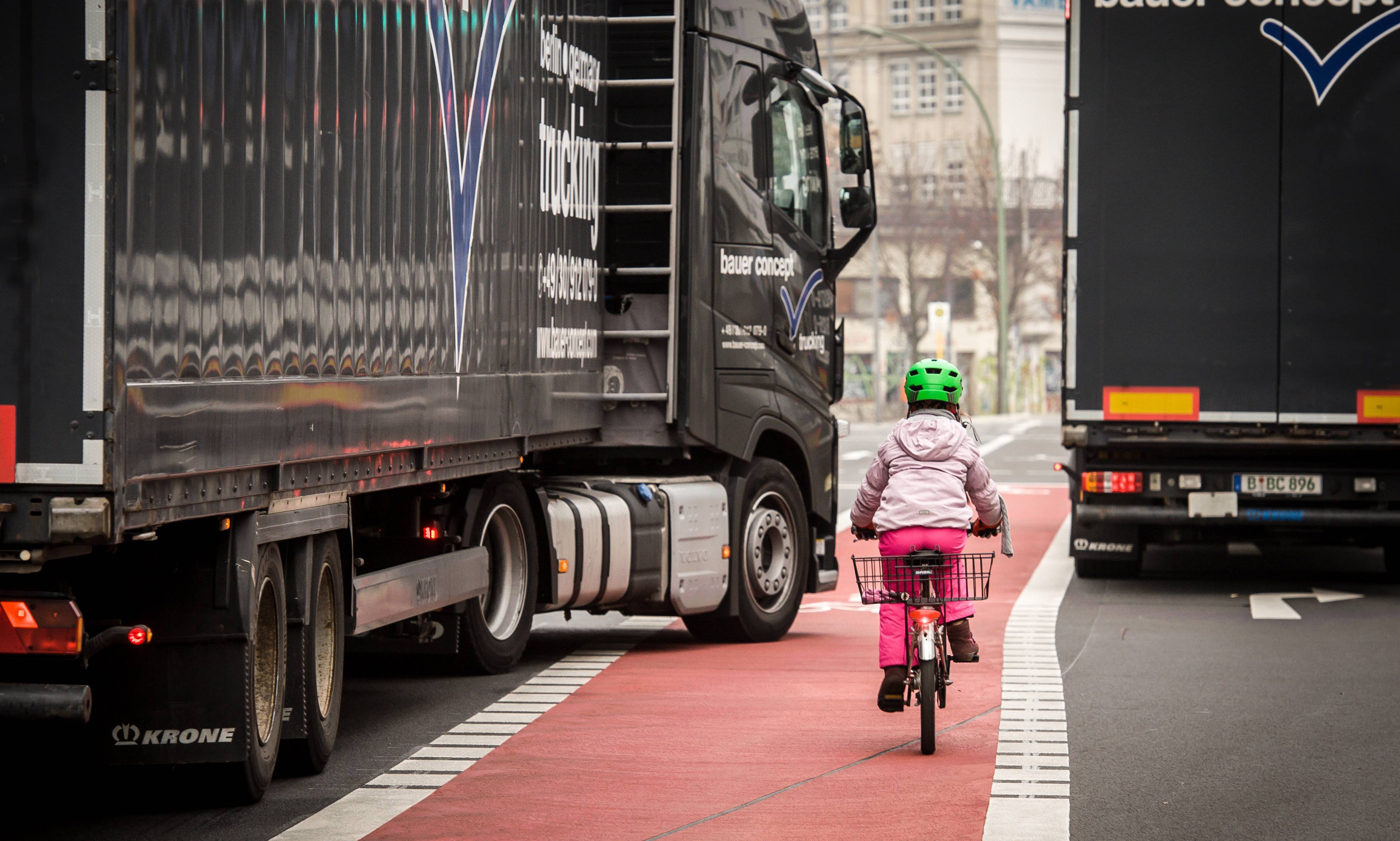 It can’t just “go on as before”
“The biggest obstacles in planning and implementing the mobility law are currently, alongside a lack of staff, the convoluted allocation of responsibilities between the state and the districts”, according to ADFC Berlin in September 2018, which criticised the sluggish pace of implementation of the planned project. “It can’t just ‘go on as before!’” A lack of transparency, lack of integration in implementing measures and conflicting interests are all factors which, in the opinion of the ADFC, are preventing progress. The committed cyclists have already achieved so much with the mobility law in this regard together with the associations. This is because they have teamed up, act in a coordinated manner and raise public awareness together. 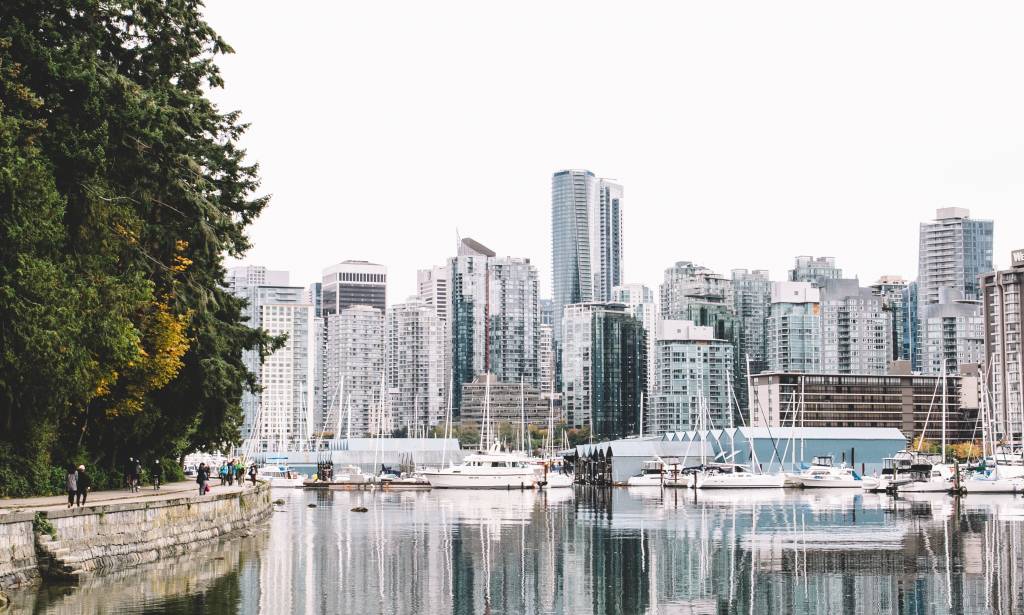 Vancouver, British Columbia / Canada is combatting other problems in relation to mobility © The Bialons

Plan B for six-lane roads through the city and rain everyday
In Vancouver, things are a bit different, for example, in Canada. The city on the edge of the Pacific Ocean is ranked the second most bicycle-friendly city in the country by the “Cycling in Cities Research Program” of the local University of British Columbia. Over the past years and decades, the municipality has invested heavily, increasingly implemented cycle routes into the city’s transport network and promoted the bicycle as a means of getting around.

The third biggest metropolitan area in the country has developed the Transportation 2040 plan, a strategy for future transport policy in Vancouver. Officials highlight in the plan how they want to collaborate with partner organisations and establish dialogue with citizens. However, the power to make decisions and plan clearly lies in the political arena. In this respect, associations and NGOs in Vancouver also have their very own opinion on cycling mobility in “their” city.

Different countries. Different challenges!
As everywhere in North America, the emphasis in transport planning is placed on the individual and the car. Your own car means freedom and freedom means quality of life. At least according to the prevalent point of view. That’s also why four or six-lane roads dominate Vancouver’s cityscape. It is additionally characterised by many hills and long distances, a result of the lack of construction outside the city centre. Moreover, in autumn and winter it rains on average more than every other day, the regional public transport is overwhelmingly made up of chronically overcrowded buses.

Motivation for cycling
The first stated goal of many active organisations is accordingly to motivate people to cycle. HUB Cycling, which has existed since 1998 and represents cycling interests in and around Vancouver describes its mission as follows: “To get more people cycling, more often.” But it also lobbies the political decision-makers for safe infrastructure as well as for cycling and bike parks. On its website, it claims to be responsible for the implementation of protected bike lanes, traffic calming measures and other successes. HUB faces opposition from drivers, who do not want to lose their important status on the road.

HUB Cycling teams up together with many other partners in the British Columbia Cycling Coalition(BCCC). BCCC campaigns on behalf of its members for safe infrastructure and raises awareness of cycling. The two are inextricably linked: Safe infrastructure is necessary to persuade more people to switch over to cycling as an everyday means of transport. Conversely, an increased number of cyclists means increased need for this infrastructure. 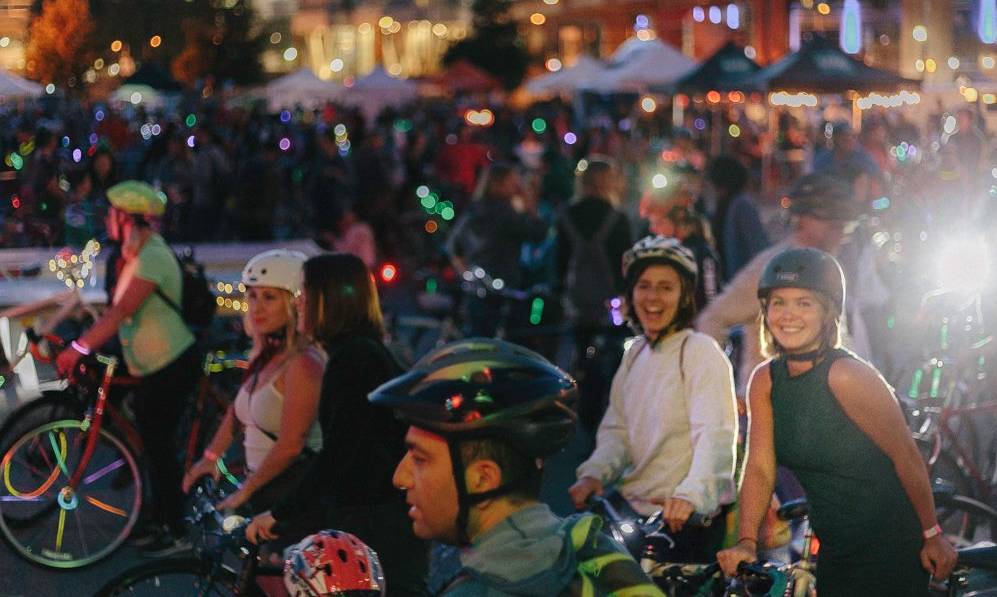 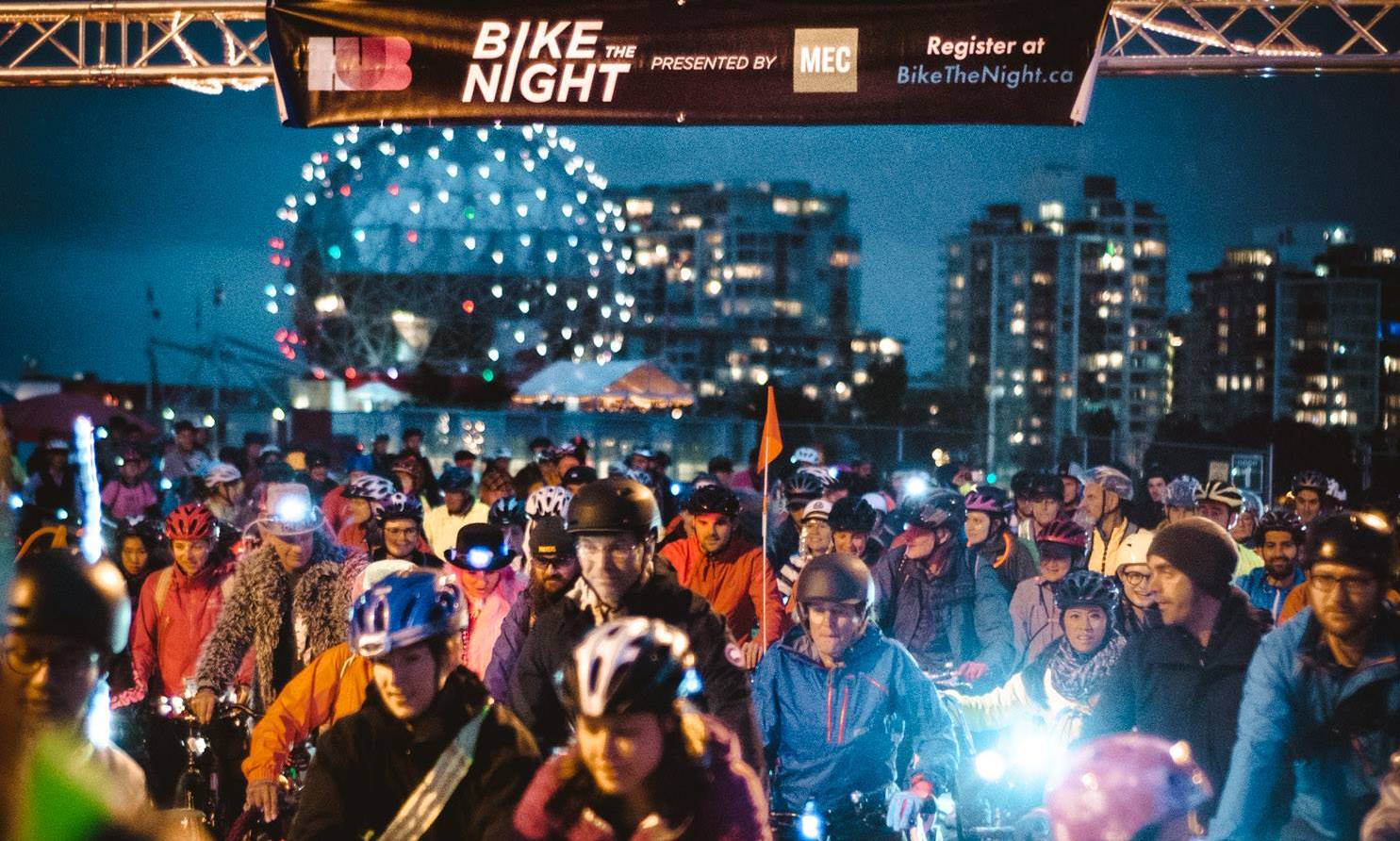 The rides are spectacular and attract many cyclists! © HUB / Simon Yoon 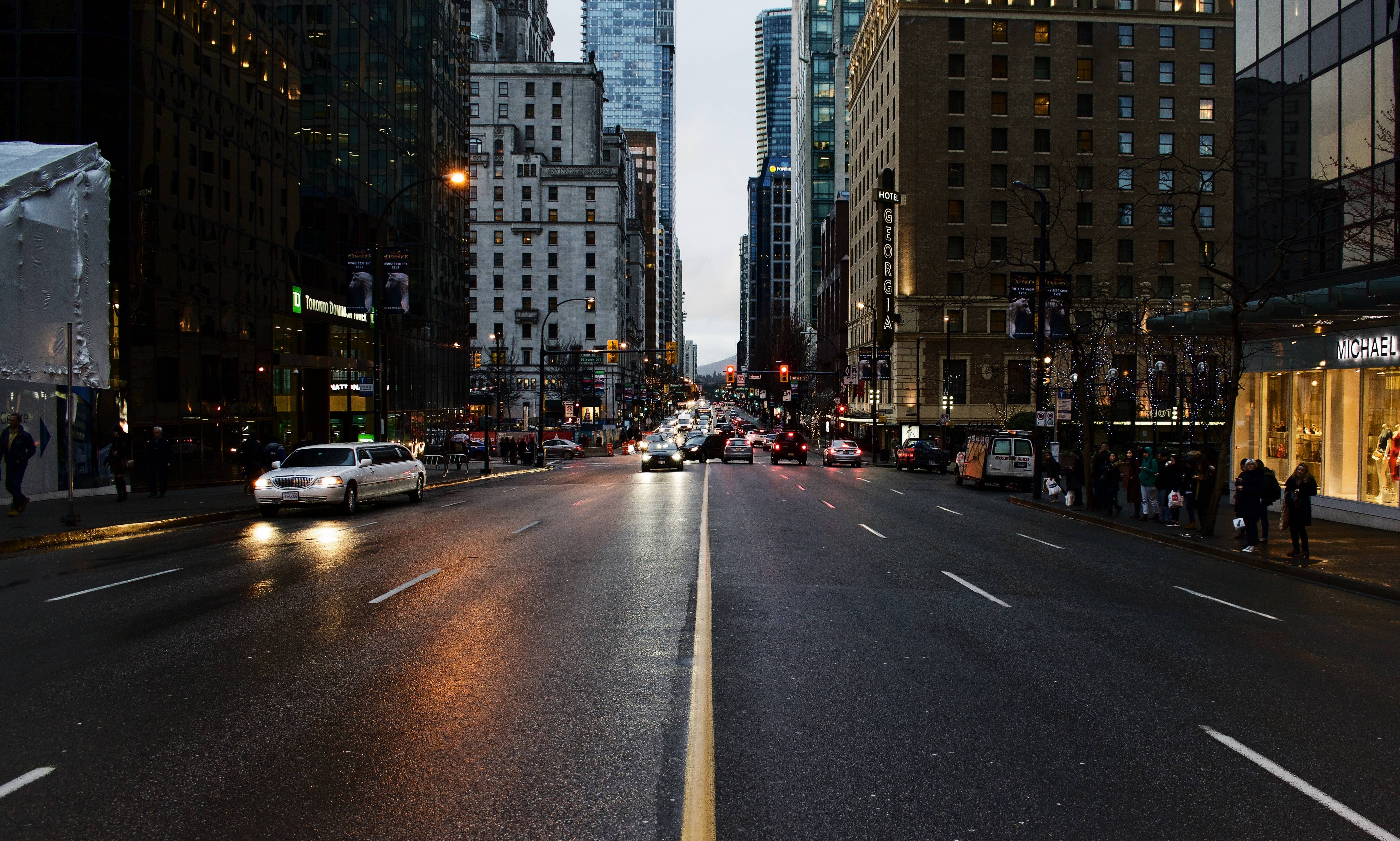 Get connected!
All the people and organisations mentioned share the same conviction: More cycling ensures a better quality of life, both from an individual point of view and in society as a whole. It protects the environment and the climate. However, more people cycling requires safe and secure infrastructure. The different organisations are fighting for these goals all around the globe. They organise the fight in networks and umbrella organisations in order to connect with each other, share ideas and present a united front when they address the political decision-makers with their concerns, concepts and ideas.

They’ve done well so far with this strategy, having been able to help shape draft laws and initiate construction projects within their respective local contexts. However, the call for sustainable and balanced transport planning is not just limited to individual cities and places. On the contrary: It is a global need. Therefore, initiatives and organisations should take the next step and make international connections in order to speak as a block on the world stage. And to ramp up the pressure!

Clear, local circumstances cannot be dismissed. And they shouldn’t be. On the contrary. Across the world, organisations, associations and initiatives could learn from each other’s experiences. For example, when they are faced with a problem that their counterparts have already overcome somewhere else. Or conversely, if a solution to a problem which has been developed in one place cannot yet be implemented “here”, but the preconditions for implementing it exist elsewhere. So when something has been done on the ground, the best practice from abroad can be imported back home. 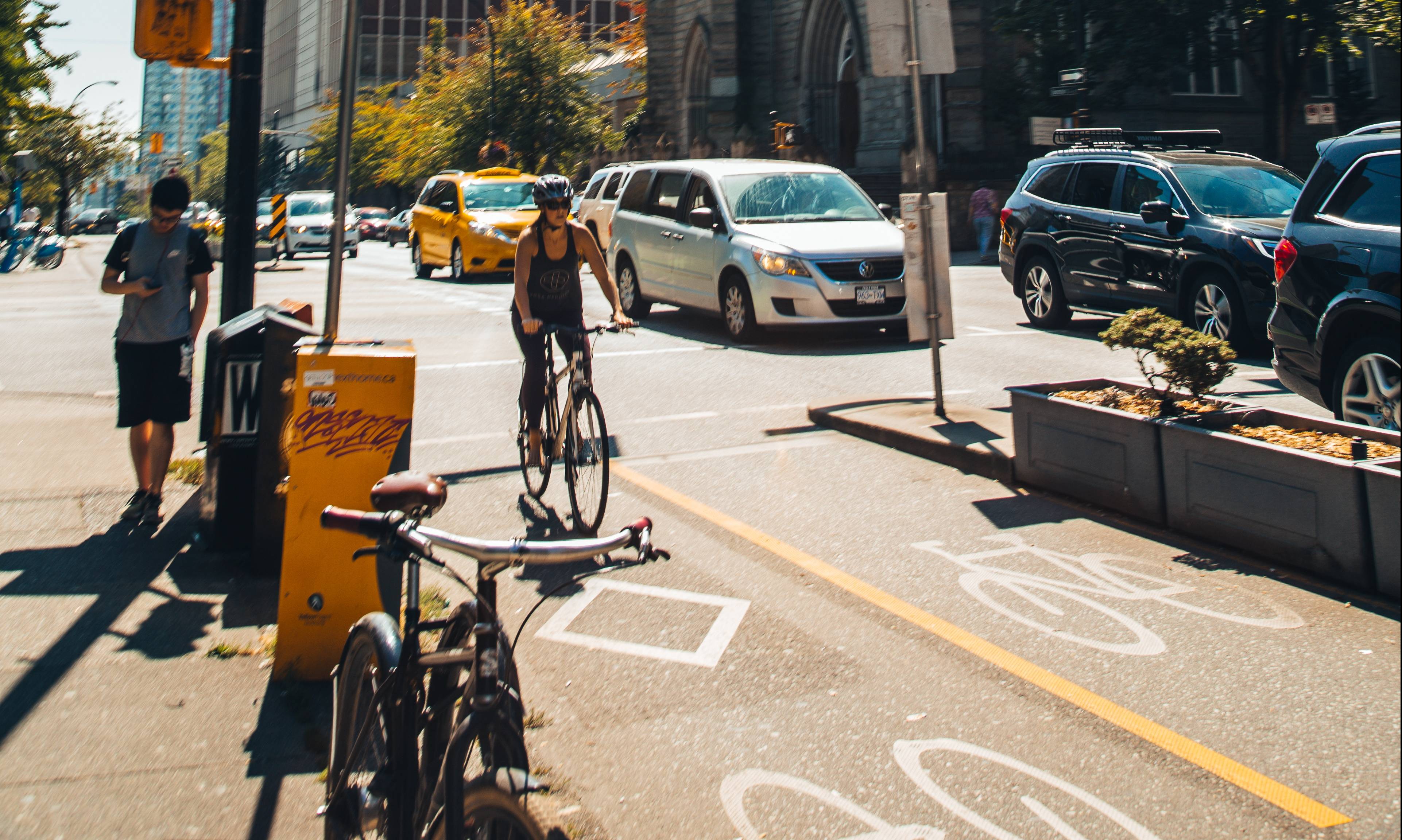 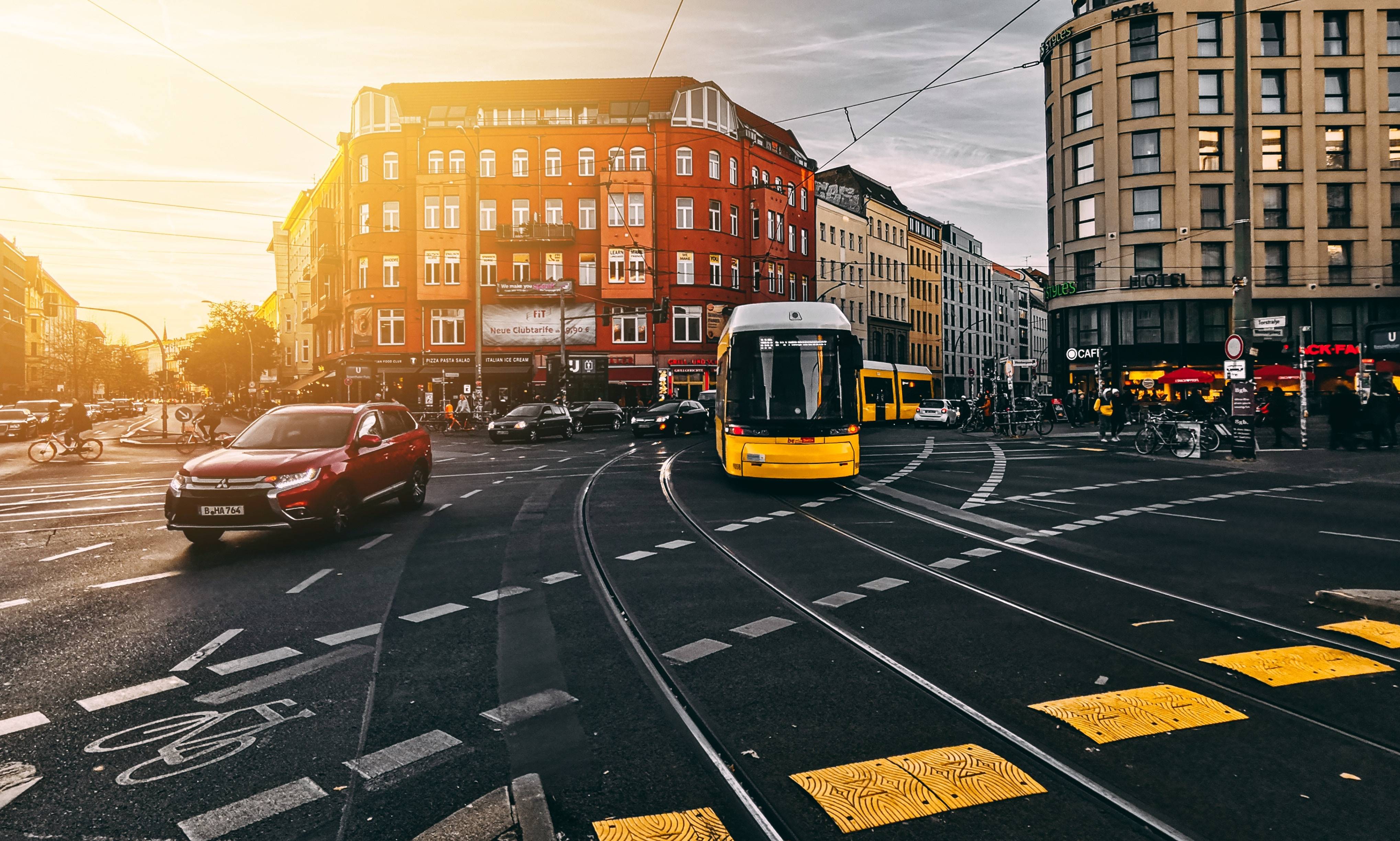 In Berlin, the safe cycle paths are slow to materialise – despite the cycling law (!) © Gily 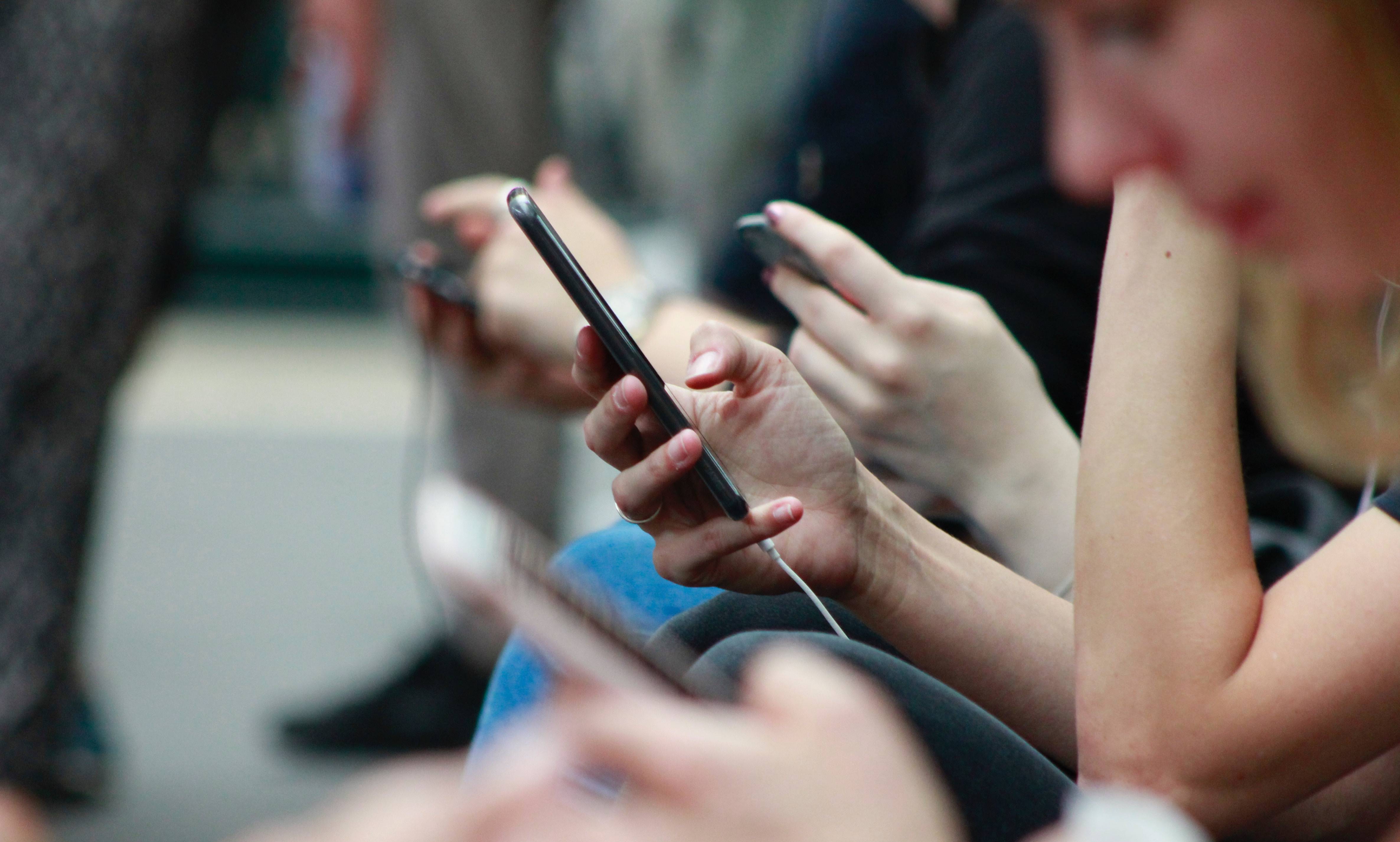 Networking creates space for feasibility. What doesn’t work in one city may be really easy in another city. Get connected! © Robin Worrall

When’s the best time for the cycling revolution? Now!
Events such as the International Cycling Safety Conference are all well and good, but most of the time they only offer a platform to research and industry experts. They aren’t, however, conducive to networking for grassroots organisations, citizens’ initiatives and activists. That has to happen elsewhere, probably digitally, right?

Of course, local groups are also primarily interested in improving the situation in their community. But they shouldn’t overlook the fact that their own issue also gathers momentum when it’s become part of a global movement. The foundations for this are invested in the big three of demand, effect and goal: Safe and effective cycling infrastructure leads to more bicycle traffic which results in a sustainable and worthwhile lifestyle.

It’s true that a lot can be achieved when these are limited to the local context. But the full power of demands and activism is only unleashed as a worldwide movement. The need for this exists. The technical possibilities too. The potential more than ever.

What are we waiting for?
It’s time for the global cycling revolution.
Cyclists For Future: Now!

“A vision to deemphasize cars” How Los Angeles is trying to reinvent itself – and why bikes are so important for that.

Download the app
by Tobias Finger
Tobias Finger studied social sience and works as a freelance journalist in Berlin. Whenever he takes a break from writing, he is riding his bike through the German capital.

Efficiency Master – a Comparison of Different Modes of Transportation

Space, energy and time – the most precious resources in urban mobility. Which modes of transportation is most efficient in these categories? A comparison.

Cargo bikes would be practical – if they weren’t so cumbersome. Cargo bikes are becoming more and more popular, but public areas often don’t have designated parking spaces for them. Cities are working to change that.

A team of specialists from different fields wants to transform the area under Berlin’s elevated U1 rail line into a covered cycle path. Despite the project "Radbahn Berlin" coming on in leaps and bounds, there are still some hurdles to overcome.
Interested in our Magazine?
Browse through it now
share article
This website uses cookies to improve your experience. Find further information in our privacy policy.
With your consent we also use cookies (e. g. from Facebook or Instagram) that allow us to provide advertising that fits your interests.
Decline Accept