How urban cycling became such a taboo topic in Sydney

Money, religion, and politics are taboo topics for polite conversation. If you live in Sydney, then cycling can be added to that list. In an era of green initiatives and health awareness, the number of bicycle commuters in Sydney has taken a recent downturn.

The media loves a topic that divides their audience and cycling is perfectly positioned to do so. From scathing reviews of public infrastructure to police officials parroting the infamous words of radio announcer Derryn Hinch: “cockroaches on wheels“, the issue of cycling is regularly aired. Bringing cycling to the forefront of public debate is necessary but it needs to be done in a debate based on mutual respect. 2011 Tour de France winner, Cadel Evans, recently made a number of reasonable statements about cycling in Sydney for a Sydney Morning Herald (SMH) article. Sadly, those deterred from reading the article based on the negative connotations of its title would have missed these points. Having ridden and driven on Sydney’s roads for most of my adult life, I would like to share my thoughts on the current state of affairs.

Issues relating to infrastructure, new legislature, and cycling participation rates are at the forefront of Sydney’s cycling debate. It is important to view these issues with an understanding of different governments and their political agendas over time. Australian roads are a shared interest of Commonwealth and State governments. The State makes the vast majority of decisions while the Commonwealth largely acts as silent partner. Since 2007, New Southern Wales (NSW) has operated under a Liberal government. Before condemning the party in power for the recent fall in the number of cyclist, it is important to note that it hasn’t been a downward spiral. The modal share of cycling rose from 2007 to 2013 under the O’Farrell government, which had a focus on increasing cycling modal share. It worked. Between 2010 and 2011, participation rates jumped by 50% according to the Sydney Cycling Survey. At the end of 2013, the minister for transport and roads, Duncan Gay, published a promising long-term plan entitled Sydney’s Cycling Future: Cycling for Everyday Transport. Following their success, the leader of the party was replaced by Mike Baird in April 2014. Despite having a comprehensive plan for cycling in place, the number of people commuting by bicycle has fallen by 8% since late 2013. What went wrong? 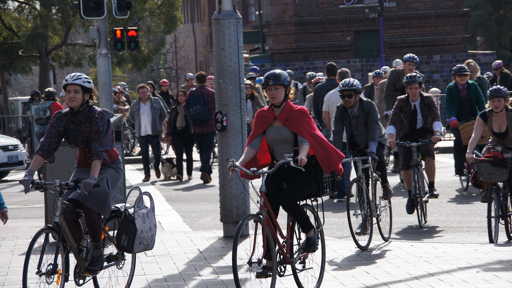 Bicycle commuting is decreasing. Not often the streets are as vivid as during this Tweed Ride. Photo: Sydney Tweed Ride via Flickr (CC BY 2.0)

Sydney’s Cycling Future address both infrastructure and non-infrastructure projects to enacted over time periods ranging from 1-7+ years. The infrastructure projects include creating cycle paths which link the North, East, and Western suburbs to Sydney’s central business district (CBD). Some bikeways exist in the CBD, including over the iconic Sydney Harbour Bridge, but routes in and out of the city are limited to non-existent. The “Nepean River Green Bridge” project was first on the list with a 2014 start date and a 1-3 year time frame for construction. As of now, the project is only just underway. Work started in August 2016 with the construction company describing it as an arduous and challenging project.

The other projects have experienced similar delays with the majority yet to be started. This has led to mainstream media scepticism of the commitment to develop cycling infrastructure. The issue was further exacerbated in 2015 when the five million dollar College Street Bikeway was replaced with a bus lane. This was used by over two thousand bicycle commuters daily. These commuters must now ride amongst motor vehicles in a heavily trafficked area. The bike paths removal was due to the decline in bicycle commuters between 2013 and 2014 as well as Sydney’s modal share of cycling sitting below the national average. Rather than taking those statistics and planning to improve commuter numbers, the Baird government appears at ease moving in a different direction. 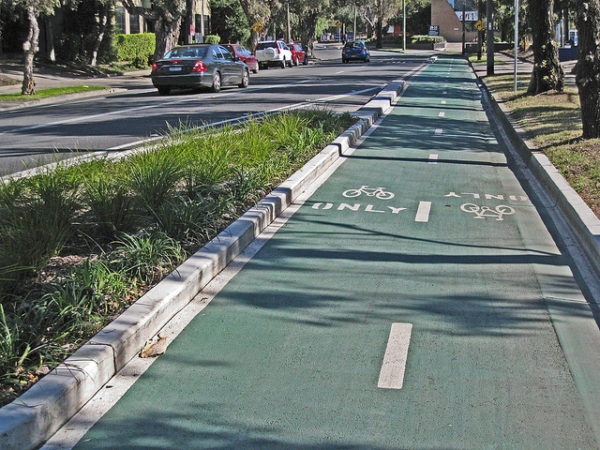 Non-infrastructure objectives include cycle promotion, provision of bicycle confidence courses, support of community events as well as updating transport guidelines and policies. These projects have far less tangible outcomes to judge their successful implementation by. Most tangible is the running of lead rider courses through Bicycle NSW, which targets recreational cyclists and those interested in commuting.

A key concern that the Sydney’s Cycling Future report promised to address was safe behaviour. Having undertaken their own research, they founds that cyclist were concerned with increasing road user awareness of bicycle road rules and safety as well as increased enforcement of road rules. These issues have been addressed through new laws introduced in March 2016. When comparing the promise to the outcome, I feel that the original intention has been lost.

The new laws require motor vehicles to leave one metre when passing a cyclist in zones up to sixty kilometres per hour. It increases to one and a half metres in zones above sixty. Crucially it allows drivers to cross an unbroken centre line when safe. This may appear to be common sense but the “A Metre Matters” campaign organised by the Amy Gillett Foundation accompanied it raised valuable awareness regarding the vulnerability of cyclists. Making this law is a definite step in the right direction. 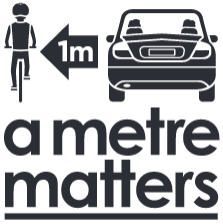 Cyclists were affected by amendments made to existing fines. Prior to March, the fine for cyclists breaking a law was $71. In many cases the new fines have seen the cost of an offence quadruple. For instance, failing to stop at a red light now carries a fine of $425. I’m okay with this. You shouldn’t be breaking the law and contributing to a negative image of cycling. What is hard to understand is that the same offence in a motor vehicle attracts the lesser fine of $325.

The same rules and consequences should be applied to all road users in an unbiased manner. Since the laws were passed a total of 15 fines have been handed out to drivers breaking the one metre law. On the other hand, over 3000 fines alone have been handed out to cyclists for not wearing a helmet. This accounts for over a million dollars in revenue. When cyclists voiced their need for safer behaviour and stronger law enforcement I do not imagine that they envisaged a crack down on people riding without a helmet or a bell.

Cadel Evans summed up a large part of the issue and solution very succinctly in the SMH. A little bit of respect between all road users would go a long way. Be it the fault of cyclists, government, the media or simply the nature of life in a busy city, you will not find a lot of mutual respect on Sydney’s streets.

The renaissance of the cargo bike #3: Sharing, Financing and modern cities

In this three-part series, Bike Citizens provides an overview of the trending topic of cargo bikes: fact checks and information on models, buyers’ premiums and financing, as well as rental bikes, infrastructure and parking. An interview with an expert for all those who (would like to) use their bikes as a means of transport! (Part 3/3)

Last Autumn, the Finnish capital of Helsinki made many international headlines when it reported glorious results from their new bike sharing system Kaupunkipyörät (“city bikes”). For 2017, Helsinki has almost tripled the system’s capacity for the upcoming season, starting in May. Let’s have a look at the past, present and future of bike sharing in Helsinki.
Interested in our Magazine?
Browse through it now
share article
This website uses cookies to improve your experience. Find further information in our privacy policy.
With your consent we also use cookies (e. g. from Facebook or Instagram) that allow us to provide advertising that fits your interests.
Decline Accept