September marked the first attempt of a speed record on a cargo bike, which was held in Denmark and conducted by the cult cargo bike brand "Bullitt". Jim Slade from Larry vs. Harry was part of it and now recalls this day for us.

by Guest Author
This is an article written by a guest author from the Bike Citizens community (full profile below). If you also want to share your cycling stories, contact us.
Image © Larry vs. Harry

It was a Tuesday in September, when we made the first attempt of a cargo bike speed record. It has been conducted by the man-myth, Rasmus Quaade. Immortalised in Danish cycling at a young age by the excellent Daniel Dencik documentary Moonrider, Quaade has also been country’s time trial champion. We could not think of a candidate more suited to attempting the record. Aside from this, the man is cool as feck and rocks the best moustache. Many months in the making due to various product launches and Rasmus’ hectic tour schedule on the Cult Continental Team, we finally managed to assemble a flock of Bullitt owners and enthusiasts out on an abandoned airstrip north of Copenhagen. In the days running up to the attempt, Claus, the stalwart mechanic at Larry vs Harry feverishly built the designated Indigo Bullitt up with a hefty selection of drool-worthy parts, including a pretty wild time trial cockpit and the ever impressive Dura Ace Di2 group set. We looked nervously at the weather forecast, trying to collectively come up with a half-decent synopsis. Things were looking patchy and a cursed cross wind looked ever more likely. 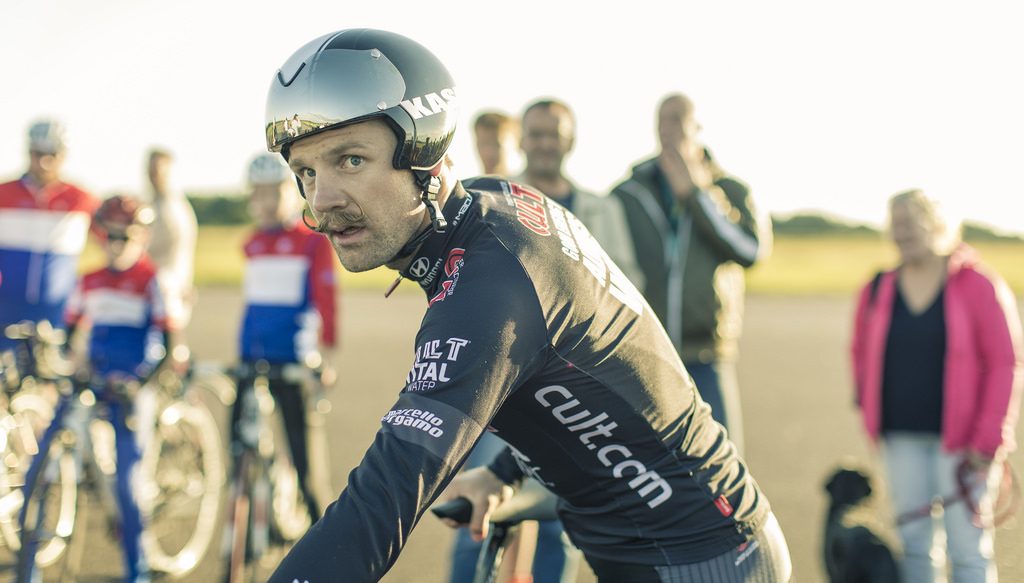 The day of the record attempt dawned and a dedicated crowd of around thirty-five Bullitt riders arrived at the shop in driving rain and greeted both old and new friends whilst we gathered spare inner tubes, distributed beer and other essential spares amongst the bikes. As if by some holy reckoning, as we crossed Dronning Louise’s Bro into Nørrebro and started our journey north the sun peeked from behind the storm clouds and graced us with it’s warmth. As we pedalled up to Værløse Flyvestation, the airstrip 20km north of Copenhagen, we were joined by the ever cheerful and industrious Cykelkokken, the Bullitt based chef whose ambitious meals-on-wheels never fail to impress, not just due to the quality and quantity of food he makes, but by the incredible warmth and enthusiasm he always brings to an arrangement.

With Quaade heading up the procession and the assorted bicycle based tomfoolery in full swing, the ride was over in a flash and we found ourselves staring down the airstrip marvelling at the scale of it all. Once assembled, we mounted the prerequisite cans of Cult energy drink aboard Rasmus’ Bullitt as, let’s be honest unless the bike is bearing cargo, it cannot really be referred to as a Cargo Bike Speed Record. The amassed cargo weighed a not insignificant 26kg and we were given the green light by master of ceremonies for the evening, Hans Bullitt Fogh. Quaade removed his warm-up kit to reveal a skinsuit fitting for the occasion and a pair of legs, so chiselled, the Greek term Adonis would not be unfitting. Timekeepers and marshals were placed accordingly and we were a-gogo. Two attempts of 2km along the length of the airstrip were to be ridden, with the average speed of the two runs taken.

A Phenomenal 48 Km/H Speed Was Reached

Watching the professional road cyclist pilot the Bullitt, drop jawed to an average speed of 42.3km/h, I was struck not only by the speed achieved but more by the grace and composure with which Rasmus Quaade demonstrated. It was a phenomenal sight, briefly put. The first run finished in a blindingly quick 2:37.97, with a speed of 48km/h. On. A. Cargobike…..The second run (3:02.72) was battling with the wind a little and so brought the average speed down, nevertheless and ever buoyant, Quaade cheerily accepted congratulations from the crowd, the local town council and conducted interviews with television crews. As the sun retreated to the horizon, we feasted on hot, salted beef bagels with pickles, courtesy of Cykelkøkken and drank the beer booze dry. 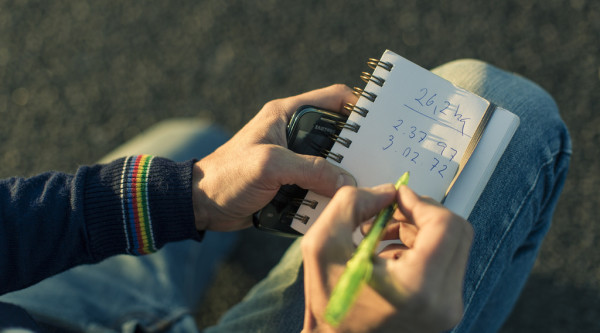 As we rode home, through the forest with lights twinkling through the trees, I was struck by the sense of community around this bike. The Bullitt, regardless of occasion, never fails to generate an enthusiastic crowd of wellwishers and helpers. So thanks to all who made this Speed Record possible, Rasmus Quaade first and foremost, but also to the many others whose ever-willing commitment and contribution to the Bullitt and to Larry vs Harry keeps our wheels-a-turnin’. 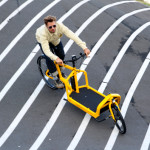 Jim Slade is a saxophone player, surfer and will ride just about any bike he can get his grubby fingers on. In between working for Larry vs Harry and Strøm Music Festival in Copenhagen, he takes every opportunity to explore the forests and country roads of Denmark and Sweden and races cyclocross in the winter to keep away the winter chills.
by Guest Author
This is an article written by a guest author from the Bike Citizens community (full profile below). If you also want to share your cycling stories, contact us.

How much of a bike freak are you?

Does your pulse quicken when you think about bikes? Do you prefer to sit on a saddle than in a chair? Then perhaps you’re a bike freak. Someone who devotes themselves passionately and with great enthusiasm to bikes. Now test ...

Critical Mass and Cycle Chic combined in one cycling event? Yes, it is possible. What started with a small bike ride among friends, evolved into a big movement. The Fancy Women Bike Ride gives more visibility to women in Turkish society and is asking for cycle safe cities. In this year's even more than 30.000 women joined the bike ride in over 50 cities all over Turkey.

Commemorating the Kindertransport – From Berlin to London by bike

In June 2018 a group of 42 cyclists retraced the over 900 km route that many children fleeing Nazi Germany had taken between Berlin and London in the late 1930s. The ride, marking the 80th anniversary of the Kindertransport, was such a success that World Jewish Relief is organizing a second ride. Register now!
Interested in our Magazine?
Browse through it now
share article
This website uses cookies to improve your experience. Find further information in our privacy policy.
With your consent we also use cookies (e. g. from Facebook or Instagram) that allow us to provide advertising that fits your interests.
Decline Accept