The trend is moving away from grey concrete and towards luminescent designs. Glow-in-the-dark bike paths make it easier for cyclists to see and be seen, while also making for a more enjoyable and cooler looking cycling experience.

by Tobias Finger
Tobias Finger studied social sience and works as a freelance journalist in Berlin. Whenever he takes a break from writing, he is riding his bike through the German capital.
Flourescent bike path in in poland. Image: PA Sp. z o.o.

A well-built bike lane is fun. It’s even better when it takes you through a nice area. The only thing that could make it even better, is if the bike lane itself also looks good. If it glows, for example.

Turquoise during the day and blue at night

Like in Lidzbark Warmiński in the north of Poland, where for six months now a 100 m section sparkles turquoise during the day and shines blue when the sun goes down. The company Strabag provided around €31,000 for the strip, whose surface is made of a fluorescent material. This material absorbs the sun’s rays during the day and then emits them at night. 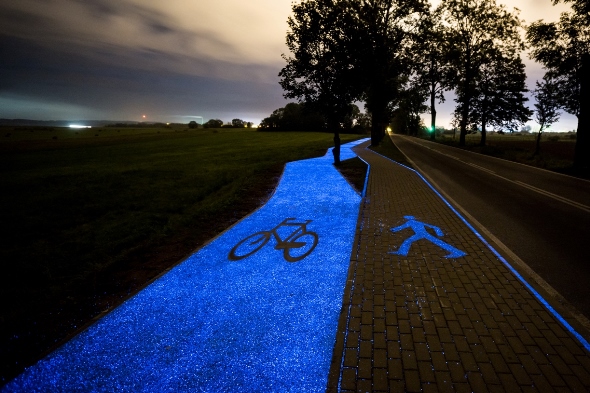 “The material can give off light for more than ten hours” explained Strabag in a press release. They added, “it’s important that the luminosity comes from the material’s properties and that no additional energy is required.” Not only is the cycle lane both pretty and sustainable, but its brightness also makes it easier for cyclists to see and be seen. Still, this 100 metre stretch cost more than twice as much than a regular bike path of the same length, which would have been between 12,000 and 15,000 Euro.

The starry night from below

The same principle has lit up an 800-metre stretch of bike lane near Eindhoven since 2014. This is how Dutch artist, Daan Roosegaarde, immortalised one of the city’s most famous resident and his art: Vincent Van Gogh and his famous “The Starry Night”.

The LED lamps in the road surface absorb sunlight and emit green and blue lights at night, thus recreating the stars in the famous painting on the ground. According to Roosegaarde however, the fascinating light show is not only intended to entertain cyclists. 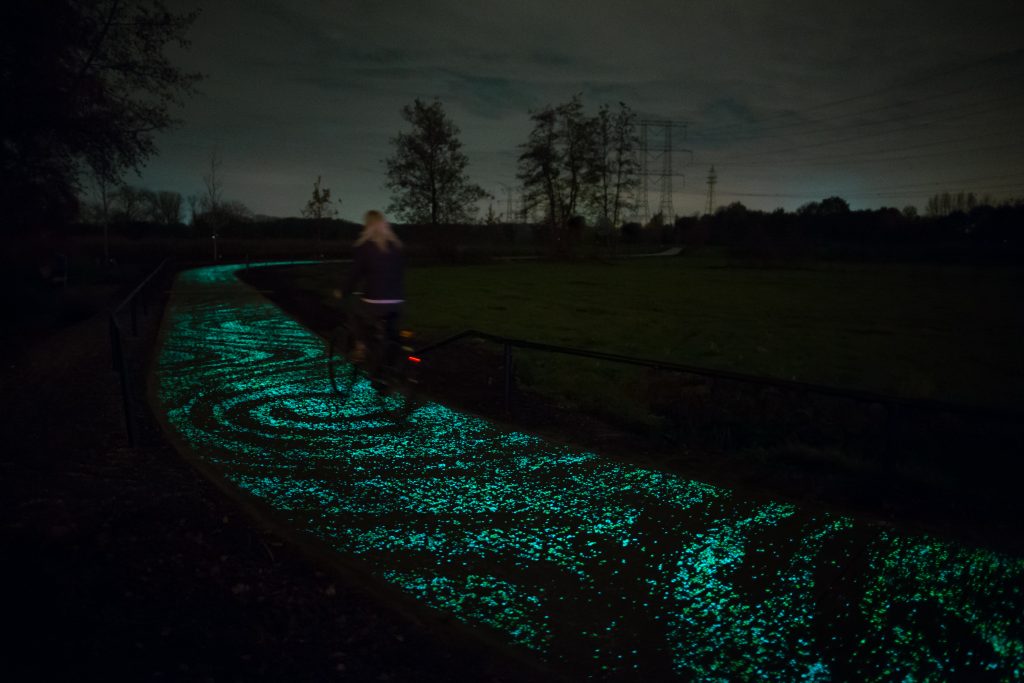 The Texas A&M University takes an approach which is not quite as poetic, but extremely sensible. The university situated just north of Houston has a busy cycle lane – crossing a junction – which is painted with luminescent markings. The neon green paint also absorbs sunlight during the day and emits it at night. 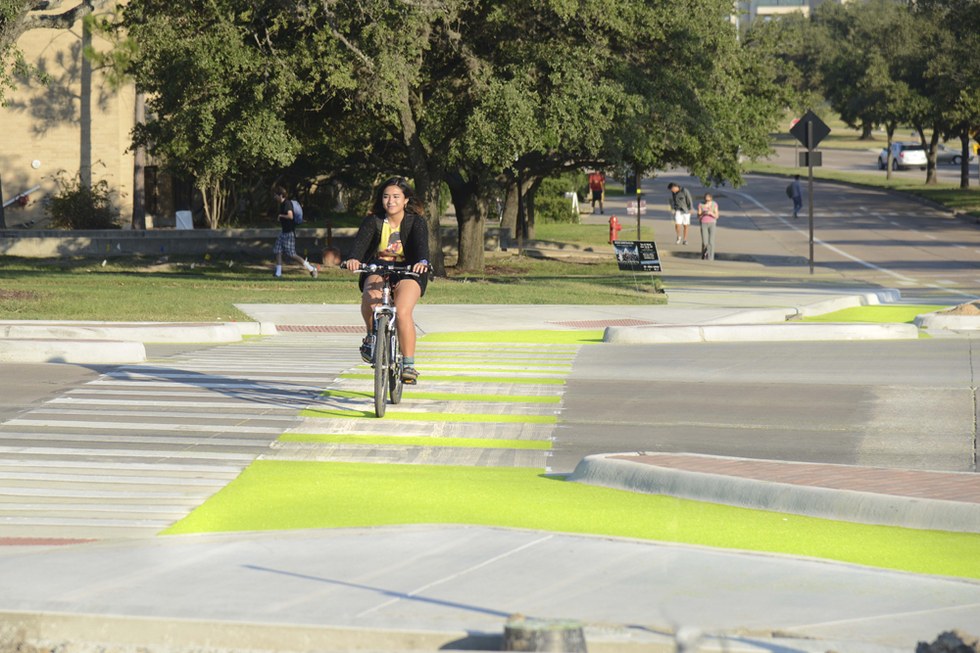 What’s more, the paint is made of recycled materials, which means it’s environmentally friendly to produce. First and foremost, it makes campus cyclists more visible. This is also in part down to the university’s choice to use a Dutch-style junction. As a result, cyclists are more visible to cars turning right and the potential for accidents is reduced.

All in all, this makes traffic less stressful for everyone, the cool design makes cycling an experience while also increasing visibility. Other town councils have already made inquiries about the new design, according to university employees. And rightfully so, if you look at it.

Discover the many facets of Finn.

The mount for every smartphone and bike.

Buy it now!
by Tobias Finger
Tobias Finger studied social sience and works as a freelance journalist in Berlin. Whenever he takes a break from writing, he is riding his bike through the German capital.

I grew up riding loops around my housing estate. Often we'd play bike tag, sometimes we'd see who could pop the longest wheelie down the street, but most of all it’d be cycling from one friend’s house to the next, dumping bikes on the front lawn before stocking up on fizzy drinks and cake.

The Cycle City conference is the meeting point for planning cycling in the UK. The yearly conference takes place in different cities and was born in 2013 in Birmingham, where the Cycle City Ambition Grant programme and the 'Get Britain Cycling' report was launched. Both set ambitious targets for cycling in the UK and help cities to unlock economic potential via promoting cycling.
Interested in our Magazine?
Browse through it now
share article
This website uses cookies to improve your experience. Find further information in our privacy policy.
With your consent we also use cookies (e. g. from Facebook or Instagram) that allow us to provide advertising that fits your interests.
Decline Accept