Graz.Tokyo #1: Fulfill your dreams and do some bike travel

Cycle 14,000 kilometres half way around the world, with not much bicycle touring experience? This is what Fabio and Elias from Austria are planning. In “Part #1" of the bike adventure series, Elias and Fabio explain why they are “really” doing this bike travel.

by Elias und Fabio
Elias und Fabio know each other for 5 745 600 minutes. Together they weight 159 kg in total and count 39 years. 128 kilometer - this is the longest distance they've ever cycled togehter in their life. (August 2018). But these facts are about to change - just right now! In 2019 the two guys from Austria ride their bikes more than 14.ooo km from Graz (AT) to Tokyo (JPN) and make a film out of it! Bike Citizens share frequently articles about the two adventurers! #graztokyo
Just a rudimentary route plan © Elias and Fabio / graz-tokyo.at

Fulfill your dreams! How often do you hear that? How washed out and tired are we of the advertisements, social media and endless chats around the campfire. We should do whatever our heart longs for. This will make the world a better place. Then we slope off to bed and the next morning the alarm rings at 6.30 am.

Elias and Fabio from Graz want to break free from the corset of social expectations and conventions. The two chaps from Graz (Austria) in their early 20s, long for adventure, the world, freedom and more. That’s why the two childhood pals are saddling up their touring bikes in 2019 and cycling – from Graz to Tokyo. And all without much bike travel experience. Their most important companion? A camera.

In Part #1: Graz.Tokyo Elias and Fabio explain why they are “really” doing and filming their bike travel; everything they need to do before D-day, the fears and long to-do lists they are both struggling with, and where they find their tailwind – but also the headwind! 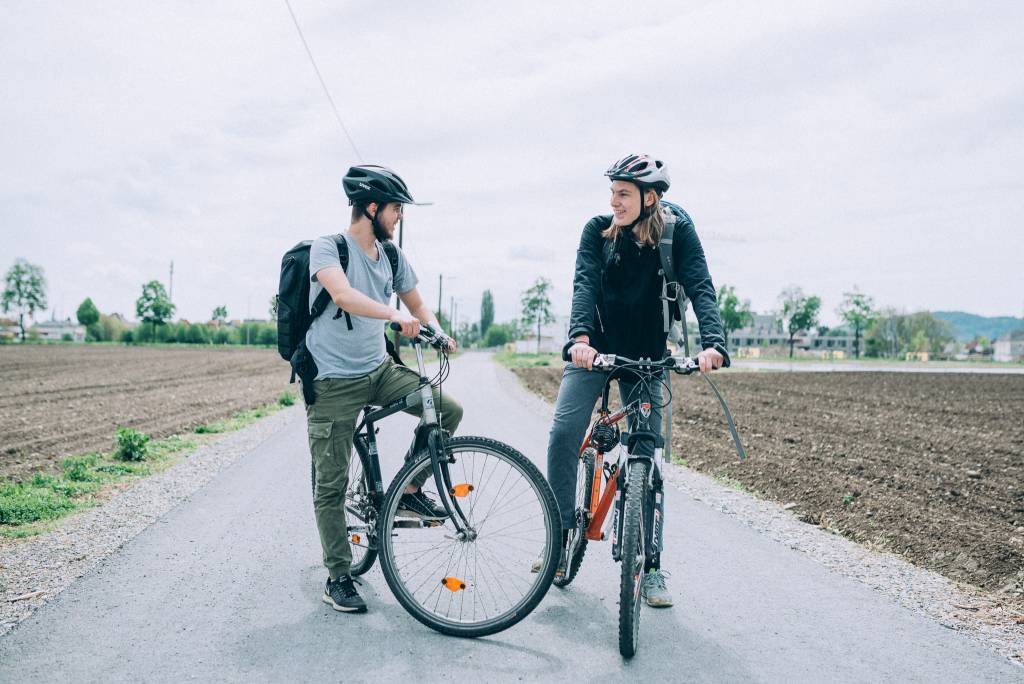 Elias and Fabio want to cycle from Graz to Tokyo in 2019 and make a film about it.

Bike Citizens (BC): Elias and Fabio, why are you doing this journey?
Elias: We want to see more of the world and discover new things, that is certain. At the same time, we want to reach lots of people with the journey and inspire them, let them share the journey. We have a message, dreams can come true! Be brave. Live your dreams! And with our trip we want to encourage people to not always choose the safe route in life, but the route you really want to take, from the bottom of your heart! And we want to cycle 14,000 kilometres!
Fabio: …also, we both have a tendency towards doing crazy things. We aren’t really proper “touring cyclists” (laughs).

BC: So, what is the longest bike ride you have ever done?
Elias: 70 kilometres!
Fabio: 58 kilometres!

BC: And how long have you been on the road without running water?
Elias: 7 days.
Fabio: 2 days.

BC: How long have you spent on the road with just the two of you, in one go?
Elias & Fabio: A whole week! (grinning)

BC: How will you let other people take part in the crazy Graz-Tokyo idea?
Elias: We are going to film ourselves and the trip. Then a documentary will be made from the footage.
Fabio: We will be blogging on our website before and during the journey, Graz.Tokyo.at. And Bike Citizens’ Urban Independence magazine will accompany us and periodically ask us how we are doing… (grins)

BC: That is quite correct – thank you for pointing that out! Have you been mulling over this idea of a bike tour for a while?
Fabio: Not really. (laughs) In the summer of 2017, I saw the documentary “Zwei nach Shanghai” (Two off to Shanghai) by the “Hoepner” twins. The two brothers covered the distance from Berlin to Shanghai by bicycle. I knew straight away that I wanted to do a tour like that. Then I told Elias about the idea in the autumn. Two weeks later serious planning started. Elias: We have also been following “Rausgefahren” (Off on a ride) for a few months, about a German married couple who have been on a cycling tour for two years. They are a great inspiration and motivation!

BC: Goals, wishes – what are you looking for most of all from the trip?
Elias: Freedom!
Fabio: Uncertainty!

BC: And was are each of you most afraid of?
Elias: Arguments!
Fabio: Uncertainty!
Elias: Of course we’d like to get to know ourselves and each other better. And that is our biggest joint fear at the same time. That we get on each other’s nerves so much that we have to abandon the journey.

BC: But what would happen with the film then?
Elias: Even if we “fail”, that will be part of our story, our message. We don’t want to dress anything up in the film or conceal anything, we would rather be honest and reach a lot of people with the documentation, to make them think. But of course we also hope to survive the journey, uninjured, and still friends! (laughs)

BC: Can you give me an overview of the route?
Elias: The route is definite. It goes through 12 countries – because we are serious country junkies so we want to get to know as many new ones as possible. I have described the route in more detail on the blog. In short, we are cycling through Hungary, Romania, Moldova, the Ukraine, Russia, Kazakhstan, Uzbekistan, Tadzhikistan, Kyrgyzstan, China, South Korea and Japan. That’s 14,000 km in the saddle.

BC: How many countries have you been to so far in your lives?
Elias: 23
Fabio: 21

BC: What do you always do first when you come back from a trip?
Elias: I eat a vegetable bake and invite my family over.
Fabio: Oh, I eat a meat risotto and then have a nap.

BC: And what it the current status of things?
Fabio: We are currently dealing with visas and travel insurance, and vaccinations are also a current topic. Kit such as tent, sleeping bags, bikes have been chosen, but not yet financed.

BC: Speaking of kit and bikes…
Fabio: We have decided on the “Kagu Trekking” bike by Simplon. It was recommended to us by many different people – but we need to buy it first. Apart from that, we have all the essentials on top, from tent and gas cooker to water filter and travel dictionary. It’s highly likely that most of the equipment will come from the company Northland. I don’t know yet how much it will all amount to!

BC: What do your friends and family have to say?
Elias: For the most part, the family is positive. At the start they were naturally sceptical, and some still are. Our friends think the idea is amazing! Everyone is supporting us, it’s great!

BC: Who is feeding the cat or watering the flowers while you’re away?
Elias: My mother.
Fabio: I hope my mother as well!

BC: Is there any opposition?
Fabio: There aren’t any people who want to stop us. But there are some who don’t think we’ll do it. That motivates us more than ever! (laughs)

BC: How are you financing the trip?
Fabio: Obviously we are financing as much as possible from our own pockets. But as the costs have risen above our means, we have started a crowdfunding project on Startnext which will run until 27 September 2018.

BC: Tell us about your Startnext campaign.
Elias + Fabio: If you support us via Startnext, you get lots of great thank yous. A postcard from Tokyo, or a very personal talk on travelling. Or a pebble from a country of your choice. Or a video message during the trip, you can use this to say hi to someone. Everyone who supports us is playing an important part in allowing us to make this film. And it’s with the film that we want to reach an awful lot of people, and have a positive impact.

BC: Elias, what would you like to ask Fabio?
Elias: How do you think our relationship will change?

BC: Fabio, what would you like Elias to tell you?
Fabio: Have there been moments in the last almost twelve months of planning when you thought that this was all too big for us and we won’t manage it?

BC: Well, we’ll asnwer these questions in another interview!

Follow their adventure on Graz.Tokyo or in the Urban Independence Magazine.  Fabio and Elias started in March 2019 – we keep you updated!

Download the app
by Elias und Fabio
Elias und Fabio know each other for 5 745 600 minutes. Together they weight 159 kg in total and count 39 years. 128 kilometer - this is the longest distance they've ever cycled togehter in their life. (August 2018). But these facts are about to change - just right now! In 2019 the two guys from Austria ride their bikes more than 14.ooo km from Graz (AT) to Tokyo (JPN) and make a film out of it! Bike Citizens share frequently articles about the two adventurers! #graztokyo

Does Prague really want to ban cycling in the Old Town?

Recently, a report on local politics from Prague caught the interest of international media. It said that cycling had been banned in the city centre. Is this really the case?

How Far Do I Get in Five Minutes by Bike?

Have you ever asked yourself how far your bicycle can take you within a few minutes? Everybody's heard that the bicycle is the fastest means of transportation for many routes within the city, but now, with the new Five Minutes by Bike function in the Bike Citizens online route planner, you can see for yourself just how true this is. Conclusion: Never underestimate the possibilities your bike offers!

Bike polo: “I became addicted to this sport”

Could the Irishman Richard J. Mecredy have foreseen that? In 1891, so say the history books, he started hitting balls into a goal using mallets for a laugh. Nowadays, bike polo is an international, upcoming urban sport which is played by thousands of enthusiasts worldwide.
Interested in our Magazine?
Browse through it now
share article
This website uses cookies to improve your experience. Find further information in our privacy policy.
With your consent we also use cookies (e. g. from Facebook or Instagram) that allow us to provide advertising that fits your interests.
Decline Accept