Always with these facts and figures! For mathematicians, they belong to everyday life, but how many of us can actually imagine slightly below 2 tonnes of CO2, or 300,000 travelled kilometres? Sometimes we simply lack reference to such statements. Therefore, Bike Citizens has been engaged in different methods over a long period of time for making numbers and comparisons more tangible. The heatmap method of visualisation has emerged as an essential element.

Cycled to the moon 5 times

Over the past five years, around 2 million kilometres, in over 400 cities, have been cycled by cyclists using the Bike Citizens bicycle App. Put it another way, this means that the Bike Citizens community has cycled a distance equivalent to the moon, 5 times. That’s quite a lot! But who can claim to have driven to the Moon? No, that’s also probably not a good comparison to imagine. What would it be like to have a video in which movement flows and kilometres travelled are represented as a heatmap? That’s what the makers of Bike Citizens thought. They then created an end-of-the-year review for Bremen, Vienna, London and Madrid in which it could be seen where and when cyclists were on the road. 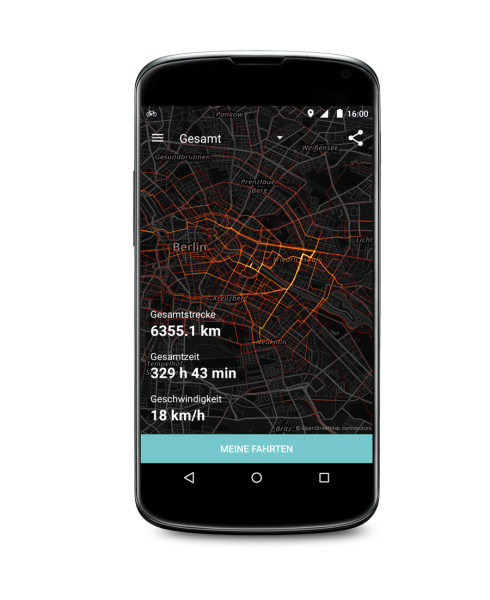 Bike Citizens strives to make cycling more accessible in cities for many people and to positively influence city planning – doing so with a more efficient evaluation of cycling data through the self-developed bicycle App. A undertaking by which each individual cyclist can make their own contribution. App users optionally submit their records and in this way, provide records which aid for city planning purposes. Heatmaps are formed by the anonymous App users “activity data” being evaluated and shown in heatmaps. Heatmaps displays frequently travelled routes in highlighted colours and provides mobility behaviour information about everyday cyclists. An example where heatmaps could be beneficial in practice, is by Goldschlagstraße in Vienna. Goldschlagstrasse was recently opened for cycle traffic. The Bike Citizens heatmap demonstrates the need for an opening. With heatmaps being created in this way, the results are a new and more complete map of our urban environment. For this overall picture, the resulting behavioural patterns that appear are of great importance: “Congestion is here every morning”, “Over there should really be a bicycle path” or “This crossing is avoided – could the reason be a lack of safety?” Experiences such as these can help by beneficial decision making in city planning and for the implementation of necessary improvements (such as construction measures against congestion). Therefore, every cyclist has the opportunity to contribute positively and influence the future measures taken in their living environment. By implementing this objective, Bike Citizens can build on the findings from numerous research projects. Currently, for example, the feasibility of analytical tools for the analysis of the recorded cycling data is being researched in a study entitled “Space-Tech for Cycling” (link only available in German) for the European Space Agency, ESA.

There are now heatmaps for almost all 350 cities – if you want to see the heatmap of your city, then please contact us at info@bikecitizens.net

Breaks from everyday life are important. Since the noughties, there has been an unspoken consensus about holidays: the farther away, and the cheaper, the better. Yet paradise is often waiting on our doorsteps. Bike Citizens Berlin spent a few days testing regional holidays, catching a total of zero flights to get to the outskirts of Berlin: the Uckermark!

Rory Mcmullan, UK City Agent at Bike Citizens, was at the Velo-city 2016 in Taipei. Here is what the cycling advocate reported about the bicycle fair.

#5minsbybike – a Look Behind the Scenes

Bike Citizens enhanced its routing algorithm to display which distances in a city can be covered by bike within #5minsbybike. Considering various factors and parameters the algorithm calculates which places can be reached within a given time from an arbitrary (freely selectable) spot in the city.
Interested in our Magazine?
Browse through it now
share article
This website uses cookies to improve your experience. Find further information in our privacy policy.
With your consent we also use cookies (e. g. from Facebook or Instagram) that allow us to provide advertising that fits your interests.
Decline Accept