Take any list of cycling-friendly countries and the Netherlands will be on top. The Dutch cycling infrastructure is rightfully praised for its effectiveness and extent, making every point of the country accessible by bicycle. Now wonder that the Dutch are the most cycling nation on the planet. The bicycle ownership rates in the Netherlands are beyond belief - the average is 1.1 bicycles per person! For example, in my household, we have 7 bicycles between the four of us, and that's including two children, one of whom can't even walk yet. Cycling is obviously very popular in the Netherlands, thanks to the magnificent Dutch cycling infrastructure. However, what few people realize is that it takes a massive effort to make and keep it successful.

by Michael Afanasyev
I was born in the Soviet Union, lived in Israel for many years and since 2003 I live in the Netherlands, in Rotterdam. Geophysicist by training, I am doing a PhD at the Delft University of Technology. In my family, we own 7 bicycles between the four of us, so as you can imagine we cycle quite often. I pedal to work, to the store, to the park with the kids, for sports or just for fun. I love cycling and I enjoy writing, so I combine the pleasures of both.
Image © Alfredo J G A Borba (CC BY-SA 4.0) on Wikimedia

As Good as You Maintain It

Firstly, any infrastructure is only as good as you maintain it. While the Dutch cycling paths are still reasonably well maintained, in these economically tough times the thousands of kilometres of cycling paths become a heavy burden on the budget of the municipalities. There are no signs of neglect yet, but its not a priority either. For example, in the winter, cycling paths are not being de-iced, except the most important routes. And the quality of the road surface can be much improved in some places.

Not for Bikes Only

Secondly, there is the issue of road sharing. Not with the cars, no – most Dutch cycling paths are physically separated from the car part of the road. But it doesn’t mean they are exclusively reserved for cyclists. On the contrary – the rule seems to be “if it’s not a car or a pedestrian, it goes on the bike path”. Thus, cycling paths are used by mopeds, Segways, runners, horse-riders, roller skaters, mobility scooters and an increasing number of e-bikes. You get the picture – its crowded there. Scooters are a special case – they can use bicycle paths but have to be limited to 25 kph. In practice, many scooters on cycling paths are much faster, which leads to dangerous situations. 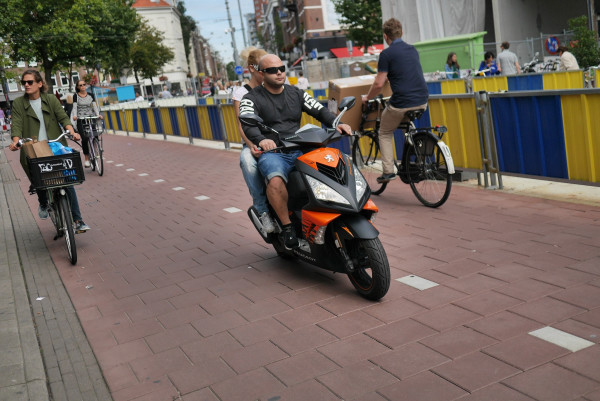 Bottle Necks in the System

Thirdly, a system is obviously only as strong as its weakest point, and there are some serious bottle necks in the Dutch cycling Valhalla. During rush hour, cycling traffic jams are a common phenomenon in the big cities. Areas around train stations are swamped with parked bicycles, which are a menace to other traffic. The brand new Central Station in Rotterdam came with a state-of-the art underground parking lot for bicycles. Only half a year after the opening, it is already full, with less than 10% of the (free) places available. 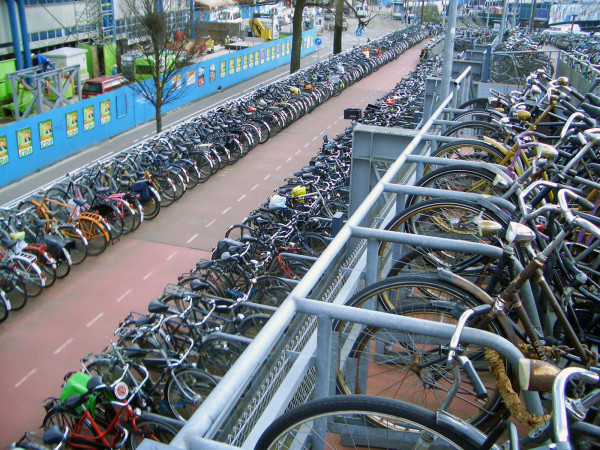 Its Getting Better All the Time

Fortunately, there are solutions to these problems. Heated bicycle paths that will remain ice-free have been the subject of much talk for years, but now the first heated path has become a reality. It is being realized that injured cyclists cost society more than proper de-icing. Pedelecs (fast e-bikes) will have to use the car road (and wear a helmet) as of 2017, just like fast scooters. Speaking of scooters, increased enforcement of scooter speed limit is starting to show results. The need for bicycle parking space has also been recognized by urban planners. For example, the city of Utrecht is building the largest bicycle garage in the world, which will ultimately have place for 12 500 bikes. And the explosive rise of the e-bike has taken the debate about “bike highways” to the next level.

The Dutch Cycling Infrastructure – an Investment Worth Making

As the Dutch numbers clearly show, investing in cycling infrastructure makes cycling safe. Hopefully, recognizing this will mean the Dutch cycling infrastructure will finally receive its fair share of investments, a share that will reflect the volume of its use and its value for society. The proper solutions will require adjustments from cyclists as well – paying for a parking space is the new reality and, who knows, perhaps toll paths will be a part of the future cycling infrastructure? And for other countries, there are lessons to be learned from the Dutch situation. Promoting cycling is only the first step. Keeping it popular, and safe for the masses, is the next challenge. Making (and keeping) cycling popular takes money, planning and awareness. But there is a reward at the end of the rainbow. Because when you take into account the reduction in noise, congestion and air pollution, an investment in cycling infrastructure is an investment absolutely worth making.

by Michael Afanasyev
I was born in the Soviet Union, lived in Israel for many years and since 2003 I live in the Netherlands, in Rotterdam. Geophysicist by training, I am doing a PhD at the Delft University of Technology. In my family, we own 7 bicycles between the four of us, so as you can imagine we cycle quite often. I pedal to work, to the store, to the park with the kids, for sports or just for fun. I love cycling and I enjoy writing, so I combine the pleasures of both.

Build it, and they will come. That's not always true, but well-thought and needed bike infrastructure is something cities can be proud of. We've made here a selection of 10 bike architecture projects which are not just visually very appealing, but also contribute to enjoy our rides.

The renaissance of the cargo bike #3: Sharing, Financing and modern cities

In this three-part series, Bike Citizens provides an overview of the trending topic of cargo bikes: fact checks and information on models, buyers’ premiums and financing, as well as rental bikes, infrastructure and parking. An interview with an expert for all those who (would like to) use their bikes as a means of transport! (Part 3/3)
Interested in our Magazine?
Browse through it now
share article
This website uses cookies to improve your experience. Find further information in our privacy policy.
With your consent we also use cookies (e. g. from Facebook or Instagram) that allow us to provide advertising that fits your interests.
Decline Accept