Germany: The RS1 bike highway in the Ruhr Metropolitan Region has become a showcase project for bike path infrastructure. The final expansion phase will connect ten major towns, around 60 large enterprise locations and a total of four universities over an area of 101 km, from Duisburg to Dortmund and then onto Hamm.

by Barbara Ottawa
Barbara Ottawa is a Vienna-based freelance journalist. Predominantly she writes about finances. Having a passion for cycling, she loves to write about everything related to this lifestyle. You find here articles in „Drahtesel“, the magazine from the Austrian bike lobby or on her blog viennabeo.net.
Fotos: Regionalverband Ruhr

The Ruhr Regional Association (RVR) turned to its neighbours in Holland for assistance with financing the project: In future, the federal state of North Rhine Westphalia (NRW) will “finance the building and maintenance of fast bike paths” explains RVR’s spokesperson, Jens Hapke, during an interview with Bike Citizens.

“By taking this step, the NRW state is following the Dutch approach. In the Netherlands, fast bike paths have been financed for many years by the Dutch state as part of anti-congestion programmes”, says Hapke.

In order to guarantee the legal basis for financing and maintaining fast bike paths, the federal state’s transport minister wants to equate fast bike paths with state roads. A corresponding law is due to come into effect in the autumn.

A “genius piece” of bike highway 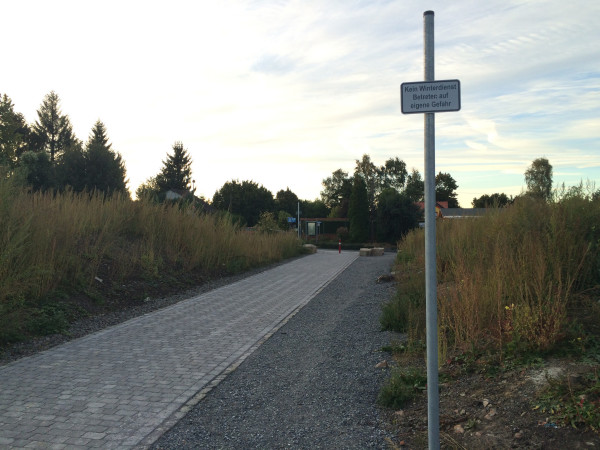 “I just rode along the bike highway (RS1) a few hours ago – a genius piece of bike path”, twittered an impressed cyclist in mid-July, referring at the time to just a small part of it.

A few days earlier, the groundbreaking section from Mülheim central station to Ruhrbrücke – 600 metres in total – was completed. Over the past year, five kilometres of RS1 between Essen and Mülheim were handed over to bike traffic.

Some parts of the route already exist but are not yet connected or are still to be paved. Parts of the bike highway are situated along the tracks of a disused railway. All sections will eventually meet the quality criteria of the NRW state:

“During counts in the Essen area in 2014, 1,000 people were counted in one day and that was on a section which has not yet been fully paved,” reports Hapke,

According to estimations by the RVR, “up to 54,000 commuters may swap their cars for using the Ruhr Radschnellweg instead, omitting journeys with lengths totalling more than 400,000 kilometres – every day”.

Total costs for the first bike highway in Germany were estimated to be 184 million euros according to a feasibility study.

Bike Highway in the Ruhr Metropolitan Region has its own website

The RS1 is the first planned bike highway in NRW – and it definitely won’t be the last. A total of seven such roads are intended to accommodate bike traffic.

Hapke describes the support from users, politicians and associations (including the ADFC) for the RS1 project and similar plans as “excellent”.

Meanwhile in Aachen, 120 km south of Dortmund, there is some discontent with regards to similar bike highway plans. Although the District Mayor stresses that “nobody here is fundamentally against having a bike highway”, there is disagreement about the routing. This is due to the costs on the one hand and the reduction of parking spaces on the other.

Fundamental support of the bike highway project in the Ruhr region can be seen in the fact that the RS1 even has its own website: http://www.rs1.ruhr

Hapke says it would be “great if the RS1 were finished by the 100th anniversary of RVR in 2020”. However, if the final expansion were to take a little longer “that wouldn’t be so bad”.

by Barbara Ottawa
Barbara Ottawa is a Vienna-based freelance journalist. Predominantly she writes about finances. Having a passion for cycling, she loves to write about everything related to this lifestyle. You find here articles in „Drahtesel“, the magazine from the Austrian bike lobby or on her blog viennabeo.net.

The renaissance of the cargo bike #1: Why are these bikes booming? A calibration of the trend

In this three-part series, Bike Citizens provides an overview of the trend topic of cargo bikes: fact checks and information on models, buyers’ premiums and financing, as well as rental bikes, infrastructure and bike parking. An interview with an expert for those of us who (want to) use our bikes as a means of transport!

Improving your city by pushing a button, that is the idea behind the new ‚PING if you Care‘ project. Starting end of May 2017, cyclists will be able to mark Brussel’s unsafe or unsatisfying traffic situations by pushing their PING button. This is a Bluetooth-enabled device which maps the marked spots. At the end of the pilot phase, all the information will be analysed and presented to the city of Brussels to enhance infrastructure planning.
Interested in our Magazine?
Browse through it now
share article
This website uses cookies to improve your experience. Find further information in our privacy policy.
With your consent we also use cookies (e. g. from Facebook or Instagram) that allow us to provide advertising that fits your interests.
Decline Accept