In the Bremen Bike Workshop, people with impairments repair up to 30 wheels a day. Customers like Daimler, Airbus and the city of Bremen rely on the service of Martinshof.

by Christoph Berger-Schauer
Thick profiles, small profiles, uphill, downhill – he loves it all - except for flatness. A bike afficionado which is impossible to proselytize. For him the bicycle is more than just a tool. He writes down, what others cannot formulate in words. He's one of the creative minds behind the LINES magazine.

2,200 employees, sales figures in the double-figure million region and 37 sites. What sounds like a full-blown enterprise is arguably one of the most successful integration projects around. Martinshof – also called the Bremen Workshop – was founded in 1923 as a “workshop for limited earners” and meets its goal of offering suitable occupations to people with disabilities, now more than ever. People with psychological limitations are introduced to the job market and provide a whole series of products and services. Food, brooms, gardening work or furniture – Martinshof offers a wide variety.

Independent in the bike shop Martinshof

Martinhof’s offering also involves bicycles. As what moves on two wheels in Diedrich-Wilkens-Straße 49/53, plays in a league with bigger bike shops. Alongside selling brands like Winora, Haibike oder Victoria, around 20 employees repair 25 to 30 bikes here per day. Group leaders Hagedorn and Villwock support working as independently as possible. Duties vary according to the skills of the employees. During the bulk of the repair acceptance to bike servicing everything is done without help, others put all their energy into changing tubes and tyres. The sense of achievement takes priority. So it doesn’t matter if the task is complex or simple: every employee gets a fixed job with their own mobile workshop – and every individual is really proud of that.

The bike business is booming

In the Bremen Workshop bike shop there’s no thumb twiddling. “Utilisation is more than good,” informs group leader Hagedorn. Alongside repair requests from private individuals, Martinshof’s service is particularly popular with businesses in the area. Twice a week a team from the bike workshop sets out for the Daimler-Benz factory to collect a portion of the roughly 3,000 company bikes, service and bring them back again. Other businesses such as Airbus, Mondelez (formerly Kraft Foods), Werder Bremen or Vitakraft also rely on this service. Even the Bremen police are found in the customer database. 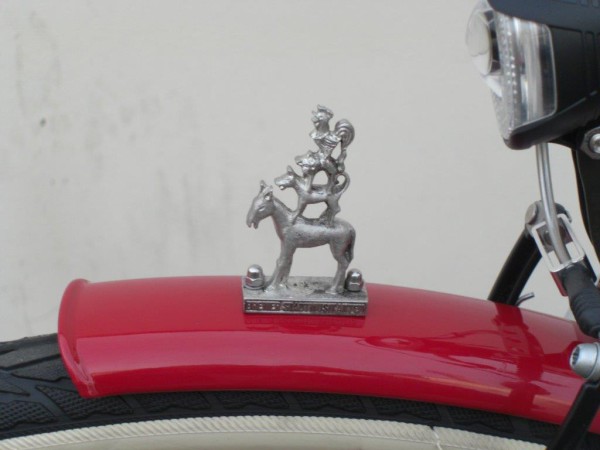 The good integration of Martinshof in the Bremen area is not only reflected in long-term service contracts, but also often leads to quite special projects. In the past special bike projects were repeatedly implemented with partner companies. The figurehead to date: the so-called “senate bike” for the Bremen state representation in Berlin. A limited E-bike fleet with a special red paint finish, white tyres and the Bremen state minstrel on the mudguard. “We will hopefully make these kinds of projects again soon,” Mr Hagedorn is already looking forward to further unusual bikes from the Bremen Bike Workshop.

by Christoph Berger-Schauer
Thick profiles, small profiles, uphill, downhill – he loves it all - except for flatness. A bike afficionado which is impossible to proselytize. For him the bicycle is more than just a tool. He writes down, what others cannot formulate in words. He's one of the creative minds behind the LINES magazine.

We are very open-minded about cycling innovations. But this time we want to deal with curious new developments that we think are aberrations in the bicycle revolution. An indication of how much is going on in the field of cycling ...

The Alleycat – a Bike Race That Gives an Adrenaline Rush

As a city awakens and goes to sleep, every moment of the day each city has its own character and magical moments. In the 1980’s a group of young ciclists, the back alley boys, wanted to experience something different and discover a new side of their hometown Toronto.

Cycling is Freedom: #BIKEYGEES program teaches (refugee) women in Berlin how to cycle

Every month, #BIKEYGEES e.V. brings together women from all over the world to learn how to cycle in Berlin. Over 600 women have already taken part in the program, learning how to ride a bike and gaining a new sense of freedom in the process. #cyclingisfreedom
Interested in our Magazine?
Browse through it now
share article
This website uses cookies to improve your experience. Find further information in our privacy policy.
With your consent we also use cookies (e. g. from Facebook or Instagram) that allow us to provide advertising that fits your interests.
Decline Accept