Safely through the night with the Blaze Laserlight

The BLAZE laserlight is a bike light from London, developed for a safer ride on city streets. Originally it was financed by kick-starters in 2015 and promises better visibility for cyclists at night. We tested the Laserlight from BLAZE.

The purpose of bike lights is obvious – they are intended to make cycling in darkness safer for the cyclist in the sense of the principle “see and be seen”. On the one hand, safer means enabling unlit objects and obstacles to be identified by illuminating the carriageway and therefore enabling prompt action to be taken. On the other, safer also means – and this applies above all in largely well-illuminated city traffic – being able to be seen properly by all other road users and in all situations. The fact that bright front and tail lights largely achieve this in parallel traffic is undisputed. But how do you solve the problems presented by perpendicular traffic or the so-called “blind spot”? 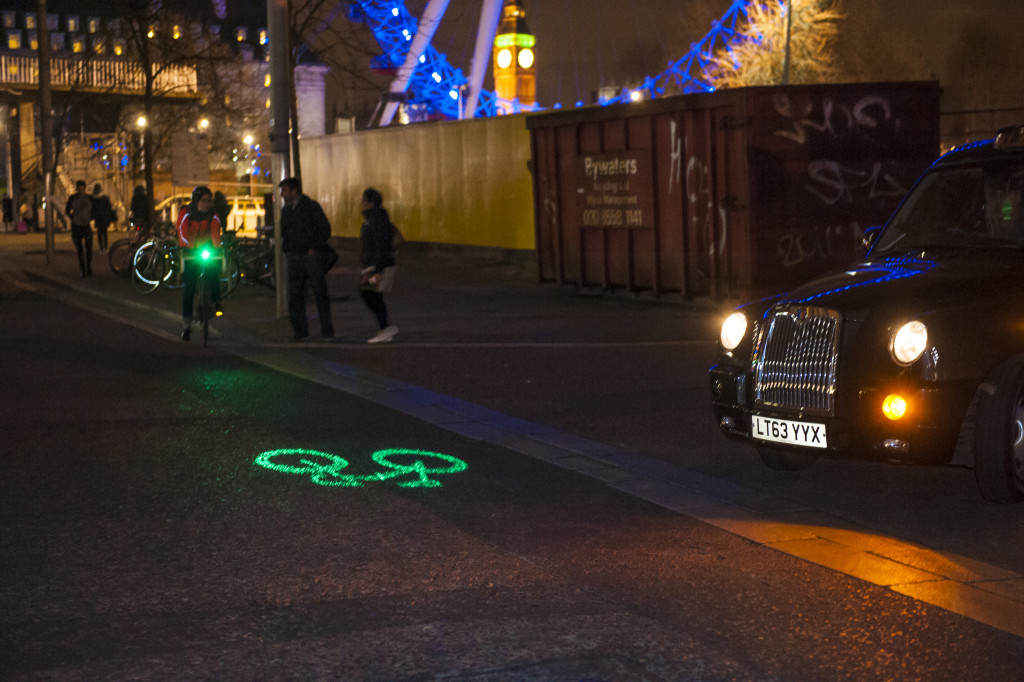 For an interesting attempt at answering this question, the London laser light pioneers from BLAZE held their torches high with the confident slogan “It’s the safest light on the road”. The have developed a powerful LED front light that considerably increases a cyclist’s perceived radius of action through a clever additional function that visually announces his presence before he actually arrives and in doing so tries to enhance safety on the bike – presenting: the Laserlight, the first bike light with an integrated laser. It projects a green bike symbol onto the road about 5 to 6 metres ahead of the front wheel and in doing so gives all attentive road users a quick glimpse into the future – something is about to happen, a cyclist is about to appear. So much for the theory. 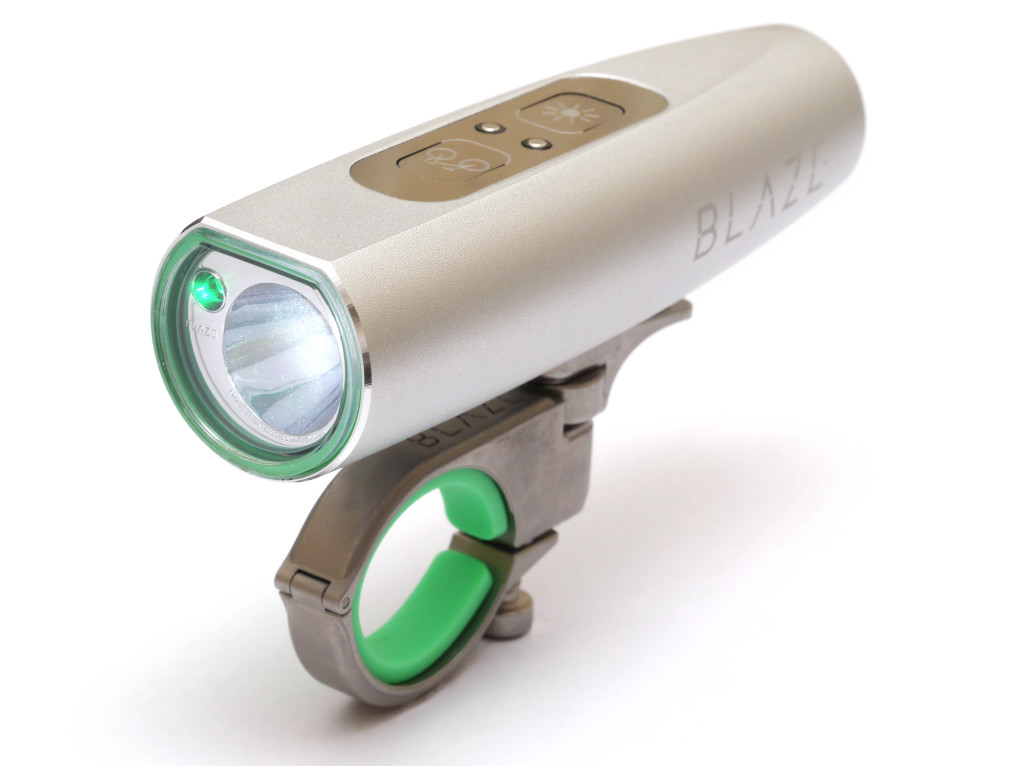 In practice, the Laserlight is a good light that brightens the night sufficiently even on the weakest of its three settings. It is somewhat big and heavy compared to other bicycle lights, but scores points with its extremely space-saving handlebar bracket and very simple installation. With a USB-charged battery life of about 4 hours, the value is just below the officially indicated 4.5 hours for continuous and weak light and laser setting. It impresses with for its high-quality finish and modern design.

Into the dark – The experience report

+ As the driver of this headlamp with green outrider, I immediately had a very strong feeling of being safe on the road and felt more present. I can very well imagine that a number of tricky situations could be significantly alleviated or even avoided altogether by using the bike laser. Especially when cycling over hard-to-gauge crossings and overtaking pedestrians or other cyclists, the advance announcement of my arrival makes me feel like I’ve got the situation better under control and also of having given all other road users the chance to prepare for my turning up.

+ The very first time I try it out, it’s obvious that the green laser bike projected by the BLAZE functions as a humorous head-turner, generating all kinds of reactions, but above all surprise and irritation. No-one’s ever seen anything like it – my impression of the reactions of pedestrians and other cyclists was that nobody has a clue what to make of this moving bike pictogram shining on the road.

– Unfortunately, the laser also has considerable limitations to its use. Any benefits are lost on poor roads or cobblestones because the bike light and the bike wobble so much that it becomes impossible to project a clear image onto the carriageway. You can also save the additional energy needed to project the laser when it’s raining and on wet surfaces because the wetness and the reflections this causes on the road almost entirely swallow up the pictogram, rendering it ineffective. Of course, surprise and irritation aren’t the desired reactions you really want to this safety feature – although irritation always goes hand in hand with unpredictable behaviour, which often leads to unconsidered, spontaneous and uncontrolled actions.

– I do think, however, that the initial uncertainty about using this phenomenon can very quickly and effectively deliver an increase in attentiveness to cyclists. Ideally, raising awareness and becoming used to the idea will result in greater acceptance of cycling and at the same time achieve an important safety upgrade for urban bike traffic. 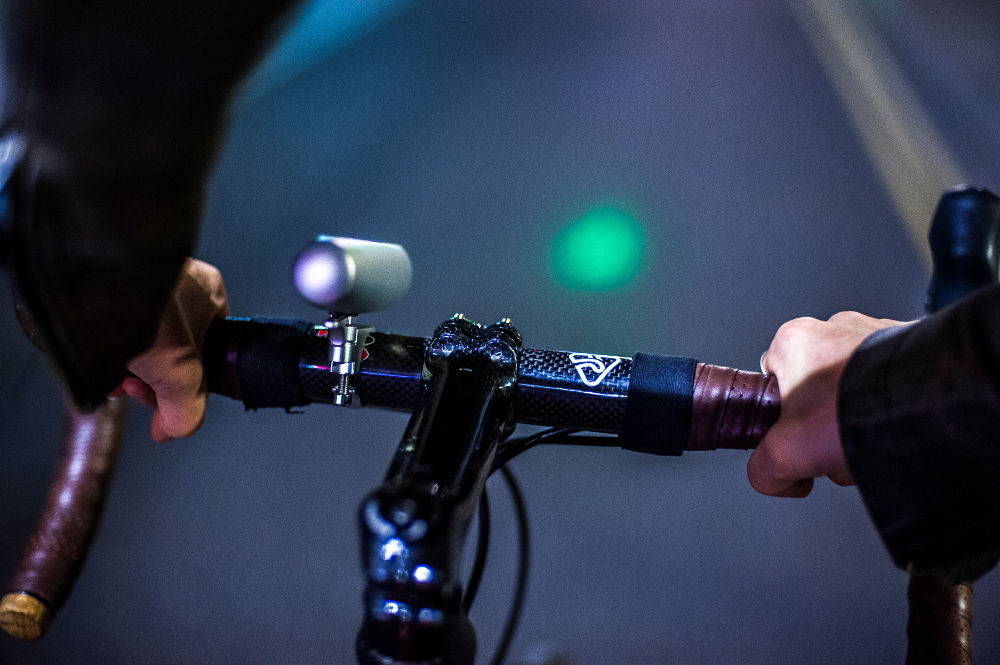 Result of the BLAZE laserlight test

BLAZE has enriched the world of lighting with a brilliant and innovative feature that delivers even more fun and draws inquisitive looks. It has also received the ‘green light’ from official sources. Checks and tests have revealed that the laser poses absolutely no danger at all. Unlike the universally familiar laser pointer, the light is more widely scattered and therefore does not cause any damage to the eyes, even when looked at directly. So now there’s nothing to get in the way of cycling safely at night, except perhaps a lack of willpower.

Only two weeks have passed since the Eurobike closed its gates and already 9,201.44 km to the west, Interbike opens its fairground in Las Vegas. This particular season is one of the most important one for people working in the bicycle industry. The Interbike, the biggest bike fair in North America, takes place from the 16th to the 18th of August in Las Vegas. 1000 suppliers, representatives from 4000 bicycle retail stores, and more than 20,000 visitors are expected at Interbike.

On holiday with a folding bike: How “small bikes” are redefining cycling trips

When you hear the words "cycling trip" you normally think of a lot of luggage on big touring bikes. On hearing “folding bike” you think about small bikes in the city. However, travelling and holidays are extremely comfortable on and with a folding bike. It opens up new horizons for holidaymakers, as it offers opportunities that big bicycles do not, whether it be for a weekend trip or for a long journey. Bike Citizens know which!

Fancy an upgrade in 2021? We’re putting our bikes in a time machine!

There are plenty of components and features that will make your bike a more attractive option throughout 2021. So don’t despair if that new bike you were dreaming of hasn’t worked out, and instead take advantage of the various ways you can upgrade your current bike to suit you.
Interested in our Magazine?
Browse through it now
share article
This website uses cookies to improve your experience. Find further information in our privacy policy.
With your consent we also use cookies (e. g. from Facebook or Instagram) that allow us to provide advertising that fits your interests.
Decline Accept