A team of specialists from different fields wants to transform the area under Berlin’s elevated U1 rail line into a covered cycle path. Despite the project "Radbahn Berlin" coming on in leaps and bounds, there are still some hurdles to overcome.

by Tobias Finger
Tobias Finger studied social sience and works as a freelance journalist in Berlin. Whenever he takes a break from writing, he is riding his bike through the German capital.
Image © Reindeer Rendering

The Radbahn vision: a cycle path over nine kilometres long, along one of Berlin’s main arterial roads, through three districts and numerous lively neighbourhoods. The whole route is covered, clearly separated from the road and also equipped with a green wave specially designed for cyclists. Alongside its entire length, the cycle path is lined with green spaces, bike service stations and recreational facilities such as small cafés and food trucks. It sounds tempting, especially in Berlin, where there’s still a lot of catching up to do in terms of bike infrastructure. 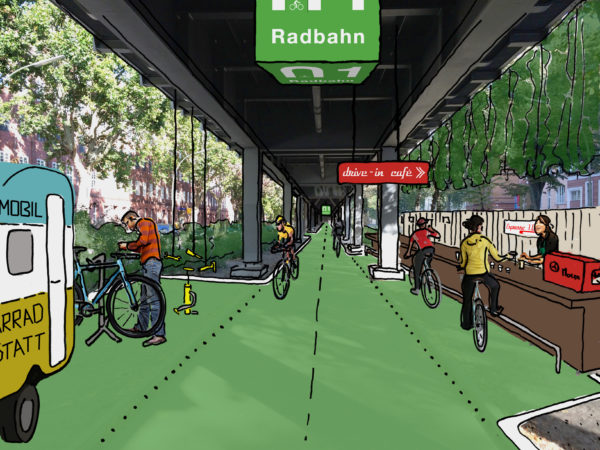 Alongside its entire length, the cycle path is lined with green spaces, bike service stations and recreational facilities such as small cafés and food trucks. Photo: Radbahn Berlin

A dream that will soon become a reality, at least if Matthias Heskamp and the rest of the team at paper planes e.V. have anything to do with it. They want to see the area under the U1 metro line – which is largely unexploited – converted into a cycle path.

The space below the overground train line, which is not needed for entering or exiting metro stations, is currently occupied with parked cars which, for the most part, are there illegally. Everybody knows the time-honoured viaduct which possesses symbolic significance, though no one closely scrutinised the unused space below it.

Until one day when Heskamp’s phone rang and his friend Martti Mela suggested the idea of using the area as a cycle path. “Two days later we’d already finished the first designs”, said Heskamp today.

The thought behind it is as simple as it is obvious: there is a lot of traffic between the metro station at the Zoo station and Warschauer Brücke. People on bikes comprise a large part of this traffic. Yet there are bike paths on only less than half of the route. The areas which do have bike paths are often not great for cycling: tree roots push up through the ground and the route itself is winding and chaotic, which takes the fun out of cycling. 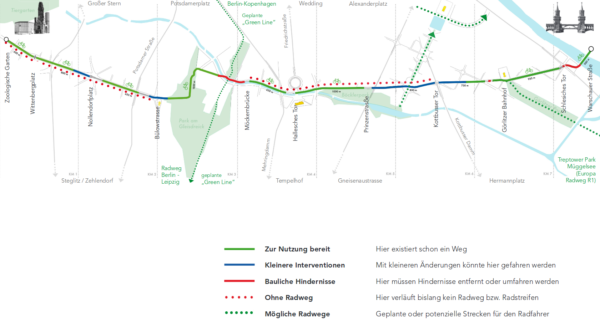 Why not separate the bike path from the road by re-routing it under the train line? “The area is unused and empty, except for illegally parked cars. Moreover, having a cycle lane there is a lifestyle element. If there was an avenue for cyclists, like the numerous ones for cars, people would be thrilled and they would use it”, Heskamp maintains.

For the diverse team at Radbahn and Paper Planes e.V., the cycle route is more than just a way of travelling safely and quickly from Friedrichshain to Charlottenburg. Instead, it’s “a plan that aims to revitalise the former space along the iconic U1 line to a pulsating urban artery. It thereby acts as a playground for modern mobility, innovation and leisure activities,” as stated in the team´s potential study. 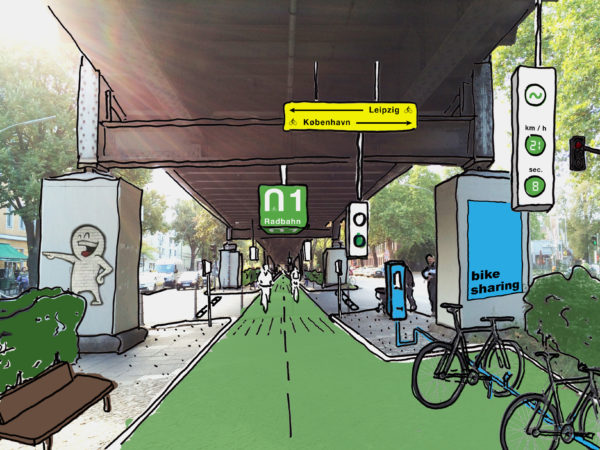 The area under the U1 offers more space than a two-way cycle path could take up. Photo: Radbahn Berlin

The area under the U1 offers more space than a two-way cycle path could take up. This means that there would be sufficient space on both sides for greenery. It can serve as an optical and acoustic curtain. There could also be room for service stations for repairing your bicycle. They could furthermore fill this area with “catering stations”, such as street cafés and food stands. Here people could relax and chill out for a while.

Positive signals from the Berlin Senate

The aforementioned potential study is scheduled for presentation at the end of May. It is the result of years of planning, consideration and research. Its purpose is to “examine the route with regard to urban development aspects, and to find answers on how we can adapt the space to the (social) geography of the districts,” says Heskamp.

After all, the cycle track would pass through varied districts with varied characteristics. Broad boulevards run along the U1 line at the Gleisdreieckpark as well as the buzzing Kottbusser Tor. They have to find individual solutions for the individual sections of the route, without changing their character fundamentally. The Berlin Senate holds the same opinion and according to Heskamp it has sent out “positive signals” in the past. But it “is also curious how they can deal with the intersections.”

The potential study, which also works with data from Bike Citizens, analyses all these possible solutions. When they’re finished, Heskamp and the others will submit the plans to the Senate, businesses and civil-society actors as well as the press. The hope is that the Senate will subsequently invest in a proper feasibility study on the subject. As always when it comes to improving infrastructure, the issue of money plays an important role.

Putting heads together to reach the goal

Despite the challenges, Heskamp remains confident. “A project like this would have a powerful symbolic effect on the pleasure of riding a bike here. This allows you to change something in people’s heads”. If the Metro Cycleway plans get the go-ahead, the team has already come up with other improvements. In addition to state-of-the-art traffic technology, the road surface should also to be exceptional. Ideally, it should be able to convert movement into electricity through pressure sensitivity.

Above all, the team does not want to stop with the completion of the cycle route. They founded the paper planes e.V. Association for this very reason. The Radbahn cycleway will only be a “small part of a large-scale cycle path network”, according to their website. That’s why the team is looking for partners who are pursuing the same goals. Paper Planes is not interested in solo efforts; Instead, everyone is involved. Participation forms the base of the philosophy, or “putting our heads together,” as Heskamp describes it.

Together, he, the entire Radbahn group, and all its partners want to promote the idea of alternative mobility. They see the opportunity of moving through the city as a big chance for change. “The rapid development of mobility issues will lead to a revolution in the next 30 years – as a consequence of climate change and a change in values,” Heskamp notes. “We believe that we can use the new space sensibly. For this to happen, we need to take the discussion to a new level.” Then dreams can become reality.

by Tobias Finger
Tobias Finger studied social sience and works as a freelance journalist in Berlin. Whenever he takes a break from writing, he is riding his bike through the German capital.

From Zero to Hero: Cities Changing for the Future

Copenhagen and Amsterdam are the bike capitals of the world and virtually synonymous with cycling. In the Netherlands cycling share dropped from 85% to 20% in the 1970s, already starting to decrease shortly after the Second World War. The efforts of many cities are impressive and are recognised in the Copenhagenize Index – Bicycle Friendly Cities.

The trend is moving away from grey concrete and towards luminescent designs. Glow-in-the-dark bike paths make it easier for cyclists to see and be seen, while also making for a more enjoyable and cooler looking cycling experience.

No one knows how much space cyclists have for cycling, how much space motorists have for driving and parking, and how pedestrians feel: thus the idea of a Road Space Justice Report was born. Heinrich Strößenreuther and students measured around 200 streets across Berlin to get the answer.
Interested in our Magazine?
Browse through it now
share article
This website uses cookies to improve your experience. Find further information in our privacy policy.
With your consent we also use cookies (e. g. from Facebook or Instagram) that allow us to provide advertising that fits your interests.
Decline Accept