Breaks from everyday life are important. Since the noughties, there has been an unspoken consensus about holidays: the farther away, and the cheaper, the better. Yet paradise is often waiting on our doorsteps. Bike Citizens Berlin spent a few days testing regional holidays, catching a total of zero flights to get to the outskirts of Berlin: the Uckermark!

by Karen Rike Greiderer
Karen runs the Urban Independence Magazin since 2017. The passionate pedal pusher has already travelled plenty of miles on her bike. Today she combines either a folding bike and a bike trailor for kids or a Compact Cargobike with the railroad in Berlin and Brandenburg, touring mostly with her daughter. Her approach to riding a bike is multilayered with a love of detail, but always practical, going back to the days of her youth spend in Austria.
Holidays on bike at Uckermark © Karen Rike Greiderer

We don’t just need holidays, we deserve them, rants present-day society. Even the environmentally conscious among us put on our mirrored sunglasses when it comes to the topic of holidays, because we want to “really” reward ourselves. So one, two, three flights a year – it doesn’t really matter. Does it?

Zoom in on the map of the world
I too (used to) belong to the frequent-flying globetrotter species. These days, I only want to use my map of the world when planning a very special trip. Being environmentally friendly on holiday is important. But where should I take my little family this summer?

While on a routine journey from Berlin to Stralsund on the regional train, I have a moment of inspiration. I am looking at the lines on the network map. Many of the stops sound familiar. They are the names of various annexes of the capital, Berlin. But what’s behind them? In the evening, I get lost on Instagram, finding my way to the #uckermark via #brandenburg. A lightbulb moment: we have dream destinations just around the corner! Next, I check the weather: The forecast is for a summery weekend, and Monday is a holiday. My boyfriend likes the idea of a short break. And our 19-month-old daughter makes three. Uckermark, here we come! 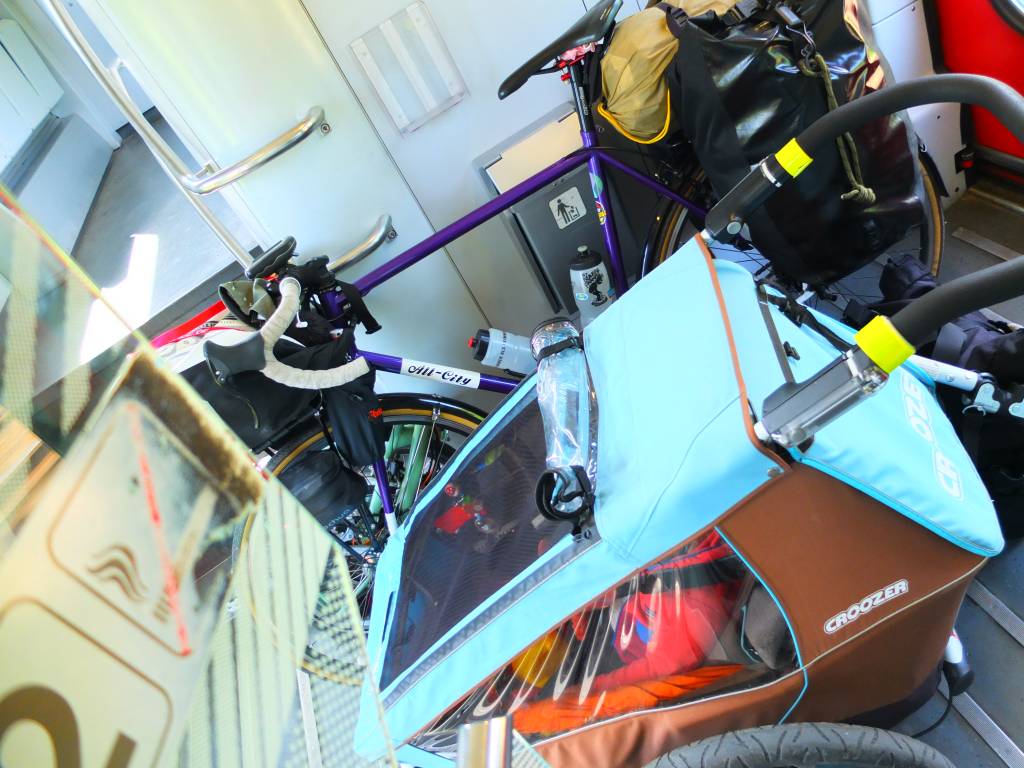 A short break for the climate and three families
On Saturday morning we take our bikes complete with child’s trailer and head for the train. In Eberswalde, the first longer stop after Berlin, we have arranged to meet family no. 2.  But they’re not there. A text message informs me that they’re going to skip the 35-km bike ride to Oberuckersee and instead will catch a later train directly to the Uckermark. So the three of us start our bike tour in Angermünde. We wander through the old town looking for an ice cream parlour. It’s like taking a journey in time: we see the faded letters “H.O.” against the grey brickwork. My boyfriend explains that this was the state-run retail brand in the former East Germany. Lovingly restored half-timbered houses and a new e-bike rental station sit side by side. We pedal off, feeling nostalgic. There’s so much to explore!

Under deep blue skies, we enjoy the picturesque scenery along the Berlin-Usedom long-distance cycle path. Sometimes we forget to pedal and simply roll along. At each hill, my daughter and I cheer my boyfriend on as he heaves the single-speed bike plus child’s trailer upwards. Now we know: In the Uckermark you should make sure your bike has gears, or simply rent an e-bike. The glaciers that once covered this area have done a great job, leaving behind a unique, rolling landscape.

During a longer rest, my boyfriend’s phone rings. I hear him say, “You should come – nature’s on fire round here. It’s stunning, and it just keeps getting better!” Later I learn that our friends from Berlin and their kids are loading up their camper van and following us.

Thus, on this mild Saturday in May, three families meet at Warnitz Camping on the Oberuckersee. The mother-child duo from Eberswalde arrive last. On a whim, they got off the train one stop early to cycle the rest of the way. For this small family, 10 kilometres is just the right distance to breathe deeply and recharge their batteries. 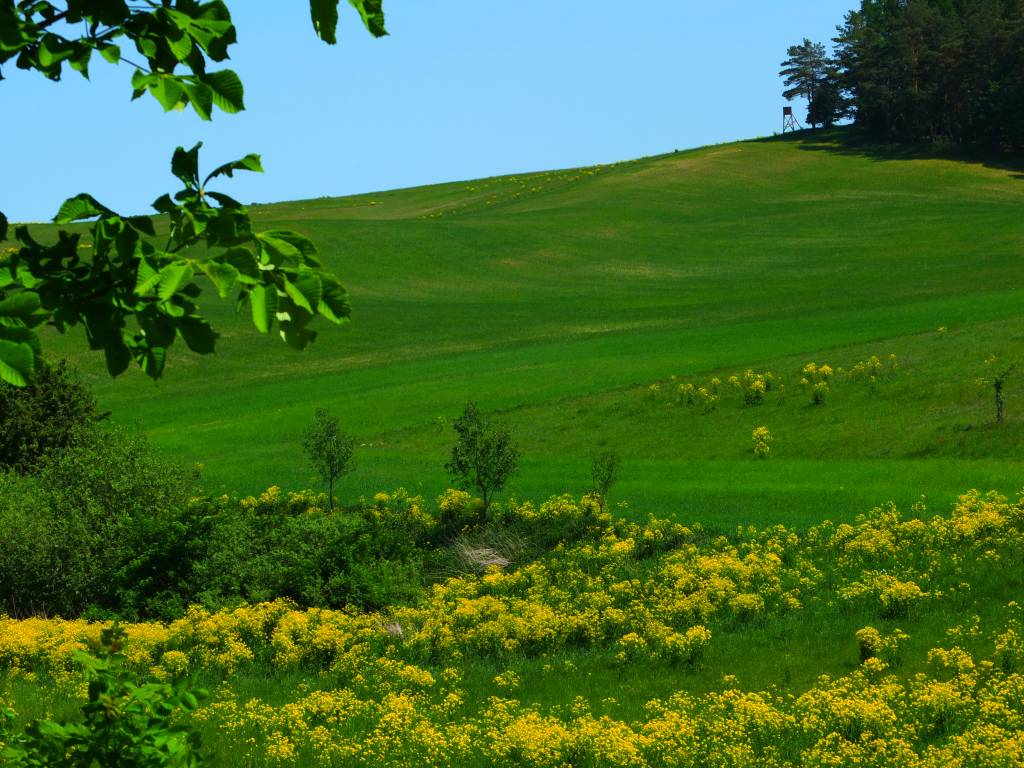 Natural camping with plenty of freedom
The campsite is laid out over a series of stepped levels, and we are immediately taken with its groovy atmosphere. Everyone seems pleasant and relaxed. To our left, a seasoned older couple are heading off with kayaks. To our right, a groupfrom the UK are dressed to the nines and celebrating a toast to the live-streamed “wedding of the millennium”! Children aged from 1 to 15 are swarming everywhere, trying to avoid being disturbed by the adults.

We are starving, so we head to Warnitz’s only guesthouse, the Deutsche Eiche, which has its own affiliated brewery. In no hurry, we “test” the beer and explore every corner of the outdoor playground and the indoor playroom. On the walk back, we are accompanied by the call of a bittern. 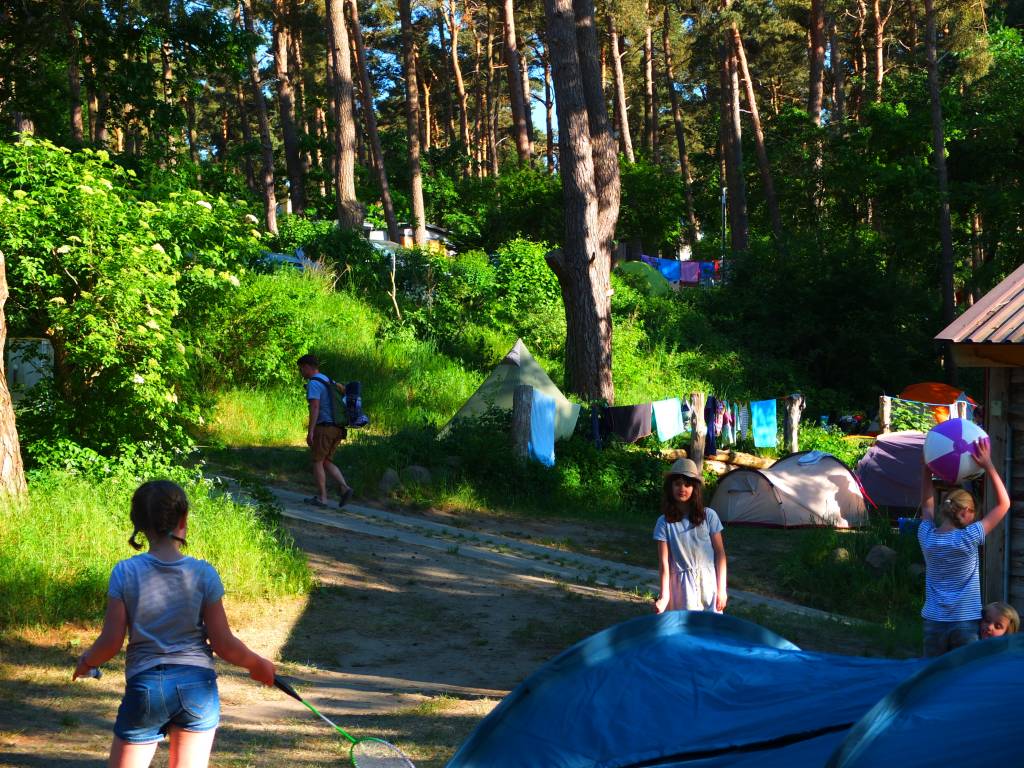 Sunday at the lake. Monday too!
We spend Sunday on the sandy family beach by the lake. There is space for everyone – including dogs. We hardly move from the water – and when we do,it’s to tend to basic needs: we attack the “Gutes Drauf” food truck. The menu offers organic, fair trade, vegan food. To be on the safe side, we try the dessert option too, after all: when it’s gone, it’s gone. On the way to the toilet, we discover the café in Warnitz’s former train station and the tourist information office. The family which came by car loads up with delicious treats from the regional shop, and is delighted to discover that they can rent bikes and e-bikes here. In the evening, the kids topple into the tents with glowing cheeks. The sunset over the lakeprovides us adults with a grand finale. 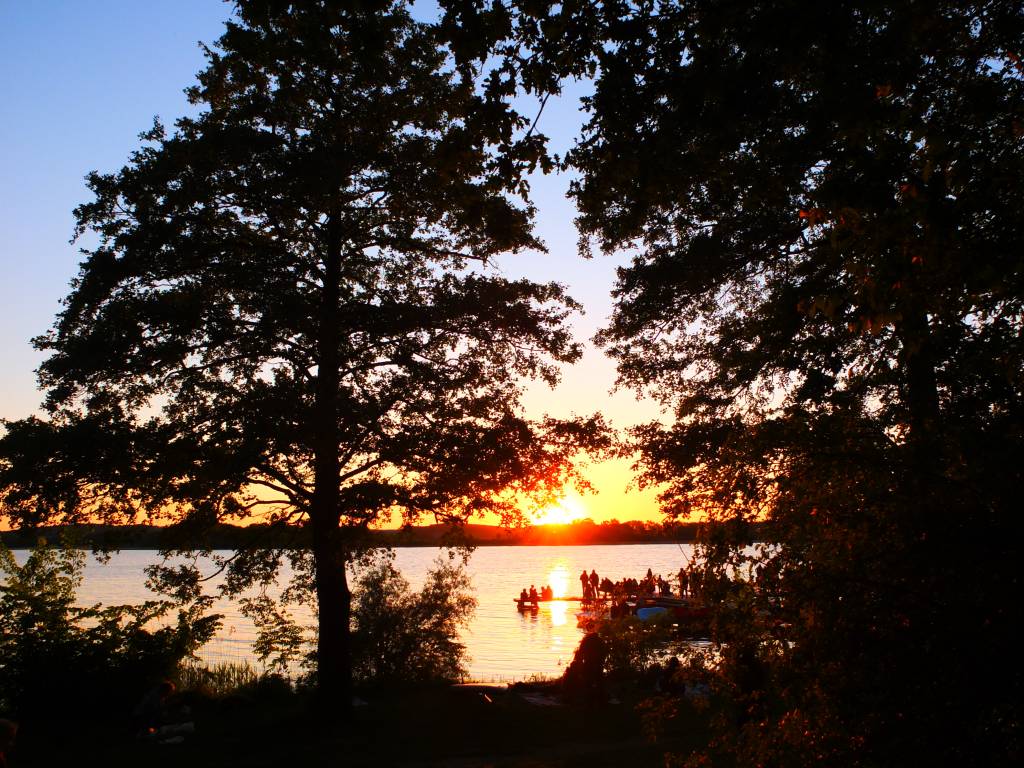 And we could have done so much more! The region won a national award for sustainable tourism in 2013, and offers something for everyone, even in bad weather. Its philosophy: tourism in harmony with nature conservation. Since February 2018, the Uckermark has been certified as a sustainable destination.Nature and landscape conservation measures, three Natural National Landscapes and the World Natural Heritage location Buchenwald Grumsin mean that over 50 percent of the region is protected.Around 1,200 kilometres of hiking trails and a well-developed network of cycle paths covering around 1,600 kilometres run through the area. The Uckermark belongs to a network of ecological service providers– and holidaymakers don’t need a car to get around. There are so called “Ruftaxis”. These Taxis, that you can order on demand (in rural regions this is no standard like in urban areas) are cheaper than normal taxis, and are sometimes used instead of bus services in rural areas. 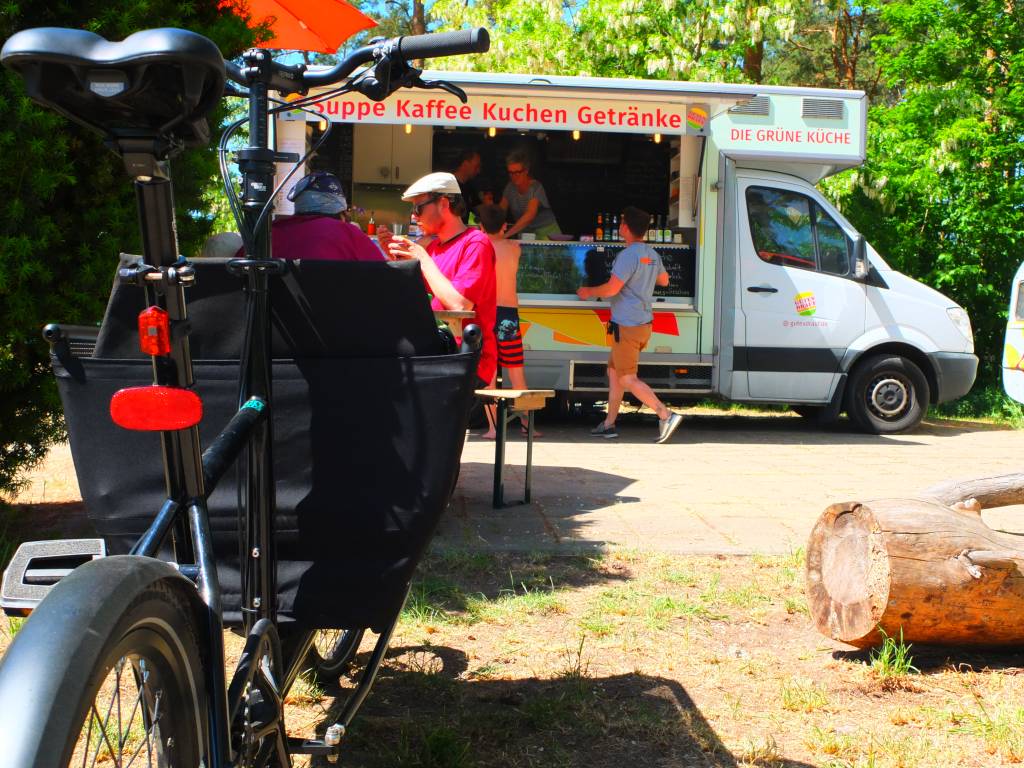 Summary: Tel Aviv vs. Uckermark
For me, ensuring an enriching travel experience has a lot to do with my choice of transport and route. Let’s take the family trip to Oberuckerseeas an example: For family no. 1 from Berlin North, it was a 60-minute car journey for their “quick weekend trip”. Their only encounter: a petrol station attendant. But they were able to pack more, which everyone liked.

For family no. 2, the train journey was a more exciting option. Their spur-of-the-moment decision to cycle the last 10 kilometres added a pinch of adventure to their otherwise very choreographed everyday life.
Travelling mostly by bike and a short distance by train, family no. 3 (us) was on the road for almost four-and-a-half hours, including breaks of just over an hour. We felt like we had gone really, really far away. “Outside”, to put it simply.  A little adventure surrounded by nature, far removed from our day-to-day life.

Four-and-a-half hours travel time – that’s almost as long as the flight from Berlin to Tel Aviv, somewhere else I would like to go. But for this year’s summer holiday planning, it was a quick decision – thanks to the CO2 calculator. Fourteen days in Uckermark: a journey through paradise by bike and train, a stone’s throw from the German capital. And with our phones in flight mode.

UCKERMARK - AN EXPERIENCE
BY BIKE

Diverse landscapes, beautiful villages, hidden swimming spots in the nature, little farm shops - some on the left, some on the right of your route...

by Karen Rike Greiderer
Karen runs the Urban Independence Magazin since 2017. The passionate pedal pusher has already travelled plenty of miles on her bike. Today she combines either a folding bike and a bike trailor for kids or a Compact Cargobike with the railroad in Berlin and Brandenburg, touring mostly with her daughter. Her approach to riding a bike is multilayered with a love of detail, but always practical, going back to the days of her youth spend in Austria.

Beautiful and brutal: the Transcontinental Race is the self-supported ultra-distance cycling race across Europe. Between myth and feasibility and in the midst of the hot summer of 2018, the first women's team masters the mighty ‘Race Across Europe’ within the time limit. Johanna Jahnke and Marion Dziwnik - Team 255 - in an interview about 15 days in the saddle, 4,000 kilometres, 35,000 vertical metres climbed and ‘proper’ challenges

In 2017, I left Adelaide for life in Brisbane. After living in a cycle-friendly city I was unsure of what to expect in a much larger one. My first trip along the riverfront at half past five in the morning was eye opening. The subtropical environment makes it ideal to commute year round. I find the weather a little humid for travelling to work but the locals don't appear to break a sweat at the first sign of an incline. Bike paths to the southwest of Brisbane are well connected and all but impossible to get lost on. Living close to Brisbane River is a bicycle commuters’ dream.
Interested in our Magazine?
Browse through it now
share article
This website uses cookies to improve your experience. Find further information in our privacy policy.
With your consent we also use cookies (e. g. from Facebook or Instagram) that allow us to provide advertising that fits your interests.
Decline Accept