I grew up riding loops around my housing estate. Often we'd play bike tag, sometimes we'd see who could pop the longest wheelie down the street, but most of all it’d be cycling from one friend’s house to the next, dumping bikes on the front lawn before stocking up on fizzy drinks and cake.

by Mark Sutton
Mark Sutton is the editor of CyclingIndustry.News. A long-time advocate of cycling himself, Sutton has been to the meetings, met those who have both failed and succeeded and written at length on the topic of active travel.
Photo © Mark Sutton

Moving around Hertfordshire as an early teen my passion for bikes emerged much thanks to my mother’s insistence that once in a while I switch off the Nintendo. Thankfully, it stuck. Just a minutes’ ride from my front door I was in the countryside, where for the first time I discovered the addictive joy of airtime. Having pinched spades from our parent’s sheds we set about digging a BMX track. The bug bit hard. We learned techniques, tricks and without realising it, shedded a whole bunch of extra weight put on thanks to a combination of Mario 64 and Coca Cola.

Life was sweet. We’d dig on the rainy days and ride when the sun shone. On this went for the spring months and into summer, until one day we raced down the track to find JCBs putting our hard graft to waste. It was a devastating feeling to learn that our enthusiasm for bikes wasn’t shared. In the end it turned out local dog walkers had complained that kids jumping mud mounds had somehow lessened their experience of the outdoors.

Fast forward to adulthood and with the BMX now consigned to the shed, there are startling parallels to be drawn between those dog walkers and a minority of road users who remain unsure how to feel about sharing space with bicycles. Myself and other locals spent a decade campaigning for a local skate park following that morale-quashing flattened-trail discovery. A full ten years to persuade my local authority that active kids on bikes and off the street could only be a good thing. The promise; “Our skate park will be the best the county has to offer”. The result; Money wasted, corners cut, but box ticked and ribbon cutting on the cover of the local paper. The legacy; a token piece of infrastructure that doesn’t satisfy the local demand by half and hasn’t been cared for since.

Again, there are similarities in how urban planners react to calls for space for cycling. A good example is London under Boris Johnson’s tenure. On the first attempt the box was ticked with Barclays blue ink. But that box was not separated from motor traffic. Very little changed, collisions with poorly designed HGVs continued to occur and the cycle campaigner’s voice only grew louder. It was a difficult pill to swallow for too many. Lives could have been saved had Johnson’s office committed proper spend and research to get the infrastructure right on the first go.

For anyone visiting London today, it is in part, a city transformed. On Blackfriars Bridge, where a segregated lane has now been laid, cyclists outnumber cars during rush hour. Hire rates of the now Santander-backed bikes soared on the appearance of infrastructure that seemingly encourages a new breed of cyclist to the streets. Who was hiring them? Not your stereotypical cyclist, that’s for sure. 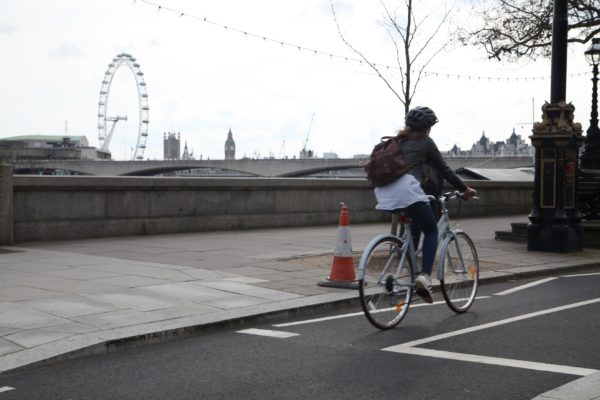 Safe cycling infrastructure is for everybody

Unfortunately, when campaigners press their local authority to set aside budget for safe cycling there’s often a reason why “it’s not for our town”. Too often it is assumed that only sport cyclists, those too often unfairly tarnished as a nuisance on the road, are the only beneficiaries of cycling infrastructure. This, I feel, misses the point entirely.

Safe cycling infrastructure is for the non-cyclist, the child getting to school, the 9 to 5 motorist who goes to the gym to pedal a stationary bicycle after work. These are the forgotten demographic and one that can be overlooked even by the cycle campaigner at times. The bicycle infrastructure of the future is not just for you and I, but for the problems we face together as a society. It is to combat obesity, pollution, to help us get a vital dose of the outdoors, to make our streets more sociable, but primarily to bring about this transport behaviour change in a natural way. Build it and they will come, the saying goes. But they have to want to come and only when they see it is safe to do so will we see cycling’s real potential.

Three tips for the cycle campaigner:

by Mark Sutton
Mark Sutton is the editor of CyclingIndustry.News. A long-time advocate of cycling himself, Sutton has been to the meetings, met those who have both failed and succeeded and written at length on the topic of active travel.

It’s cool to ride a fixie. Having only one gear is trendy. Anyone wanting to draw attention to themselves and their bike on the roads and in front of cafés will be riding a fixed-gear bike. That’s one aspect of it. However, there is more to it than just accessories for hipsters and urban subcultures when it comes to drastically downscaled bikes. A correction.

As Bike Citizens we stand for the verve of cycling and see the role of the bicycle related to the question of how we want to live in cities.

Lost in Berlin? How to Get Safely by Bike through the City

Berlin has more than 1,500 km of cycle paths – who can keep all that in their head? After cycling in the city for the past four years, I can tell you: cycling is safe, fun and a source of freedom!
Interested in our Magazine?
Browse through it now
share article
This website uses cookies to improve your experience. Find further information in our privacy policy.
With your consent we also use cookies (e. g. from Facebook or Instagram) that allow us to provide advertising that fits your interests.
Decline Accept