All Change! Has the US reached a turning point in transportation?

The US is a country synonymous with the car. This vast land and its people embraced car culture like no other. Is the bicycle a valid form of transportation in such an environment? Has the US reached a turning point? If so, what changes are being made to encourage people onto two wheels?

A recent blog post on The Guardian website warned that our roads were so choked with traffic that we had reached “carmageddon”. Decades of misguided government policies, the writer opined, have led us to the point where the car is king – dictating both lifestyle choices and planning in our towns and cities.

It was time, he said, for a wholescale rethink on transport policies to safeguard the health and wellbeing of our present and future generations.

The Netherlands has often been cited as the benchmark for those in favour of promoting cycling infrastructure. On this occasion, the author was calling for a truly 21st century transport system, extolling the virtues of cities such as Helsinki – where a point-to-point transport system aiming to render car ownership as “pointless” and Hamburg, with its vast network of cycle and walking paths.

The article was speaking from a UK and European perspective but its concerns are transferable across the Atlantic.

[su_infobox]In 2010, research showed that roughly 30 percent of all daily trips made by Americans were less than one mile in length. Of those trips, almost 70 percent were made by car. (source: CityLab)[/su_infobox]

Scott Polikov, president of Gateway Planning, told Governing that, given the choice of making a point-to-point journey by car or public transportation, that:

“If you ask people to take an extra two hours to take a bus or walk a mile, they’re typically not going to do it.”

In contrast, Ralph Beuhler, PhD – Associate Professor in Urban Affairs and Planning at Virginia Tech – argued in an article for The European, that the reasons for such statistics were not necessarily rooted in a lack of desire by the individuals concerned but he did concede that driving is easy and so much more convenient than the alternatives:

“The biggest challenge to increasing the use of public transport, cycling, and walking in the U.S. are not individual attitudes, but government programs and policies that together make the car the only viable transport option for most Americans.”

This pattern of policy-making favouring the car driver is longstanding. The mass motorisation of the US happened very quickly; assembly line manufacturing drove down costs, helping car ownership to grow apace in the 1930s. Town planners and civil engineers, therefore, built their roads, bridges and tunnels to facilitate the movement of motor vehicles.

At the time, the US was still a young enough country to be able to build an infrastructure tailored to the specifications which the car required. This was in contrast to many old European cities, where the urban landscape has grown organically over centuries, often built over a complex and compact medieval template.

Cost is also a factor which has a bearing on the choice of transportation made by travellers or commuters, with lower taxation rates in the US than in many other countries.

While policies on taxation, fuel prices and urban and highway planning were one thing – another was lifestyle and publicity. Cars became desirable, not only as a mode of transportation but also as a luxury item or a symbol of status. Car ownership became a requisite – often seen as a rite of passage for teenagers moving into adulthood. Not owning a car was a sign of not having “made it”.

The might of the automobile was reinforced from many angles. Many will be familiar with the term “jaywalker” – when a pedestrian crosses a street without regard to traffic regulations, or at an unassigned place. A “jay” used to be the term used to describe someone who was unsophisticated – a simpleton, or a country bumpkin, hence their lack of awareness on a busy city road. “Don’t be a jaywalker!” screamed public notices – the clear implication being that the motor car is a higher authority and it now owns the space on the road.

The writer Bill Bryson told a tale in his book The Lost Continent: Travels in Small Town America of his struggles in one US town in the late 1980s to walk from one side of the road to another. Such was the lack of facilities for pedestrians, it became necessary for him to drive the few hundred yards in order to choose a different place to eat.

Things are starting to change. According to census data analysed by Governing, only 9 percent of US households don’t have access to a car, so it would appear that most people are not ready to give up their motor vehicles just yet. Nevertheless, urban planning experts believe that the benefits of reducing the numbers of cars in our cities are manifold: cleaner air, healthier residents and safer neighbourhoods are but a few.

It is said that younger couples and families rely less on their vehicles. Is the cost of car ownership now beginning to bite, or are we seeing a new lifestyle choice coming to the fore?

The redesign of towns and cities across the US can only assist. Of course, attempting to do so to the detriment of car users would not be helpful – all modes of travel must be catered for in a safe and convenient fashion.

Portland, Oregon is to US cycling infrastructure as the Netherlands is to Europe – it is a shining example of how things could be, given the right foresight, determination and funding. The city boasts over 180 miles of bike lanes, with almost half being off-street. It was the first city in the US to utilise “bike boxes” at intersections and is an advocate of the “bike train” system for schoolchildren. 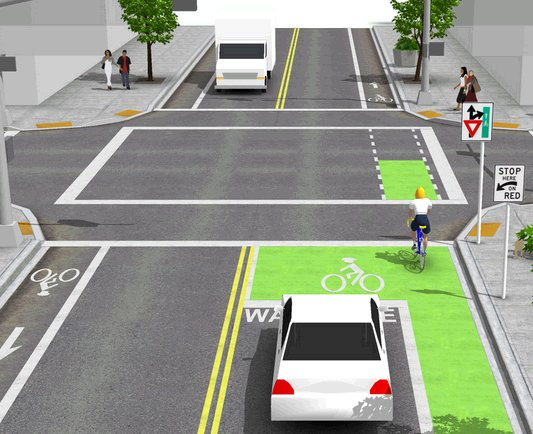 Davis, California, is another example. It is a place where bicycle culture became deep-rooted in the 1970s, leading to the creation of extensive bicycle infrastructure that truly works and an overall tolerance towards two-wheeled transport. A network of good rail connections and shuttle buses for students also help reduce the need for a car.

Right now, it could be argued that the most populous cities, gridlocked for a long time, are the places which are in the position to make the best transition to multi-modal transport.

A growing population creates an ever-increasing demand for quick, efficient crosstown travel. New York City, for example, has plans for the largest streetcar project in the US to be in operation by 2024. The Big Apple is also focusing on sustained investments in walking, biking and public transportation in a bit to drastically reduce greenhouse gas emissions across the city in its 80×50 plan.

So, have we reached “peak car”?

It would be foolish to believe that our reliance on the automobile could be ended swiftly and that the populace would suddenly shift to travelling by rail, tram, subway, bus or bicycle. The transportation system would not be able to cope immediately and the roads are not yet so welcoming to new cyclists. Many cities in the US are showing, though, that the green shoots of change are starting to be seen – and the major factor in helping that is by giving the public a genuine choice.

How Perth managed to increase bicycle commuting by 28,6 per cent

The 1890's were a boom time for bicycling in Australia. Western Australia (WA) was amidst a gold rush, which attracted many hopeful prospectors seeking their fortune. Bicycling was the key form of transportation and led to the world's largest network of bicycle paths ever created. The gold rush was short lived and many of these paths no longer exist today. The use of the bicycle plummeted throughout the twentieth century. More than one hundred years later, things are changing. In the age of the hybrid car, WA policy makers are managing to renew interest in using healthy and green transport alternatives.

Stolen Bicycles and Accidents: Cycling in the Press

Until not all that long ago, if one came across an article on cycling in a daily newspaper that did not turn out to be an advertisement for a sports equipment retailer, it was mostly about stolen bicycles and accidents involving cyclists.

The renaissance of the cargo bike #1: Why are these bikes booming? A calibration of the trend

In this three-part series, Bike Citizens provides an overview of the trend topic of cargo bikes: fact checks and information on models, buyers’ premiums and financing, as well as rental bikes, infrastructure and bike parking. An interview with an expert for those of us who (want to) use our bikes as a means of transport!
Interested in our Magazine?
Browse through it now
share article
This website uses cookies to improve your experience. Find further information in our privacy policy.
With your consent we also use cookies (e. g. from Facebook or Instagram) that allow us to provide advertising that fits your interests.
Decline Accept