Cargo bikes would be practical – if they weren’t so cumbersome. Cargo bikes are becoming more and more popular, but public areas often don’t have designated parking spaces for them. Cities are working to change that.

Ann-Kathrin Schneider doesn’t need a car. For eight years, the head of the German cyclists’ association (ADFC) has used a cargo bike for all her journeys in Berlin with heavy or awkward luggage. It’s practical for her, but she isn’t happy with the lack of parking spaces for her large three-wheeler – often her only option is to leave it on the pavement. Although she’s allowed to park her bike there, it’s not an ideal solution. “Pavements are ultimately for pedestrians”, she says.

Traffic regulations allow Schneider to park her cargo bike in paid on-road parking spaces, but she doesn’t do that. “I’d be worried that the bike would get damaged on the road”, she explains. She is campaigning for cities to make providing short-term and long-term parking spaces for cargo bikes an urgent priority.
And with good reason, as demand is steadily growing. According to the German bicycle association ZIV, in 2020 alone 103,200 cargo bikes were sold, 78,000 with and 25,200 without a motor. That represents a huge increase on 2016, when sales of cargo bikes were so low that ZIV only counted sales of electric cargo bikes – just 15,125 of them.

Claudia Hille, director of the institute for transport and spatial planning (IVR) at the Erfurt University of Applied Sciences, estimates that there could be 5.2 million cargo bikes in Germany by 2030. She heads up the IVR’s project to provide parking spaces for cargo bikes in local areas, and she and her colleagues have developed a guide that local planners can use to identify the requirements for parking spaces and other needs in different neighbourhoods. The evidence shows that the backyards and basements in many apartment buildings and quarters built during the 19th century are unsuitable for large cargo bikes – their hallways are often too narrow, or the bikes are too heavy to be carried up the steps into the house or down into the basement. 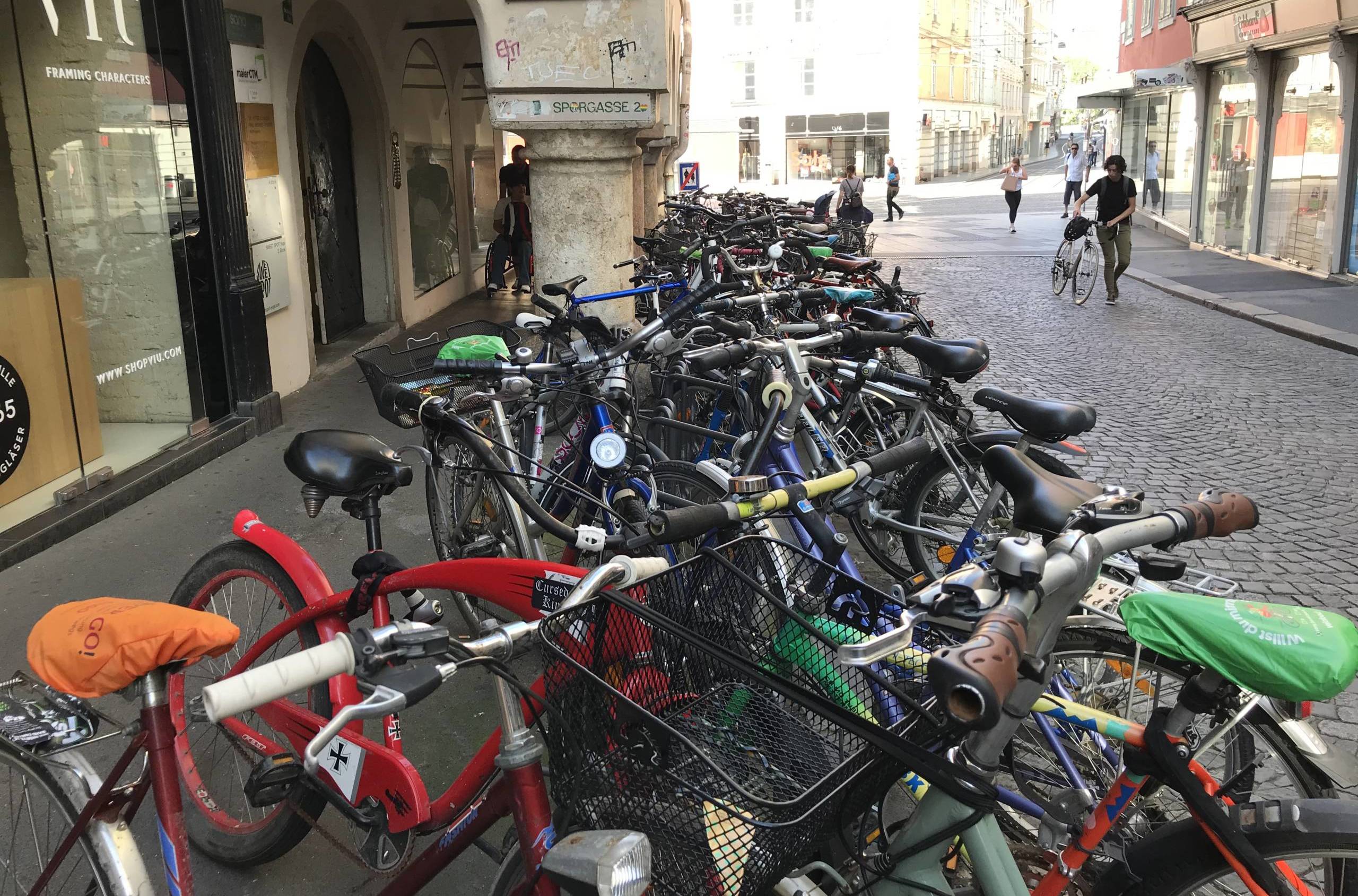 Even without cargo bikes, bicycle parking spaces are limited in many cities. Photo: © Bike Citizens

Berlin has responded to the growing numbers of cargo bikes, and in 2019 a parking regulation was introduced specifying that up to three cargo bikes can be parked diagonally in one longitudinal car parking space. The regulation also recommends installing beacons to clearly distinguish between the parking space and the road. In the Neukölln district of Berlin, four cargo bike parking areas have now been provided.

“Measures like these are key to getting the message across”, says mobility researcher Dagmar Köhler from the German Institute of Urban Affairs. She believes it is crucial that local planners take cargo bikes into account when providing bicycle parking facilities, and explains that in many cases it is relatively simple to do: “The first cities to do this have now stopped illegal car parking at road junctions simply by installing bike stands.”

In densely populated residential areas and old town districts, both short-term parking solutions and weatherproof parking facilities are in great demand. Hille and her team have developed design templates for the four cities of Munich, Leipzig, Nordhausen and Hanover, ranging from simple bike stands with integrated benches to lockable wooden bike shelters. Planners can use these templates to draw up tailored solutions for cargo bike users in their local areas, whether they’re inner-city districts built in the 19th century or smaller towns in rural areas. And if researchers’ recommendations are followed, this cycling infrastructure can benefit more than just cyclists. “Smaller towns often lack central areas where people can enjoy spending time”, says Hille, who goes on to explain that cleverly positioned facilities combined with benches or raised plant beds can become meeting points for people. 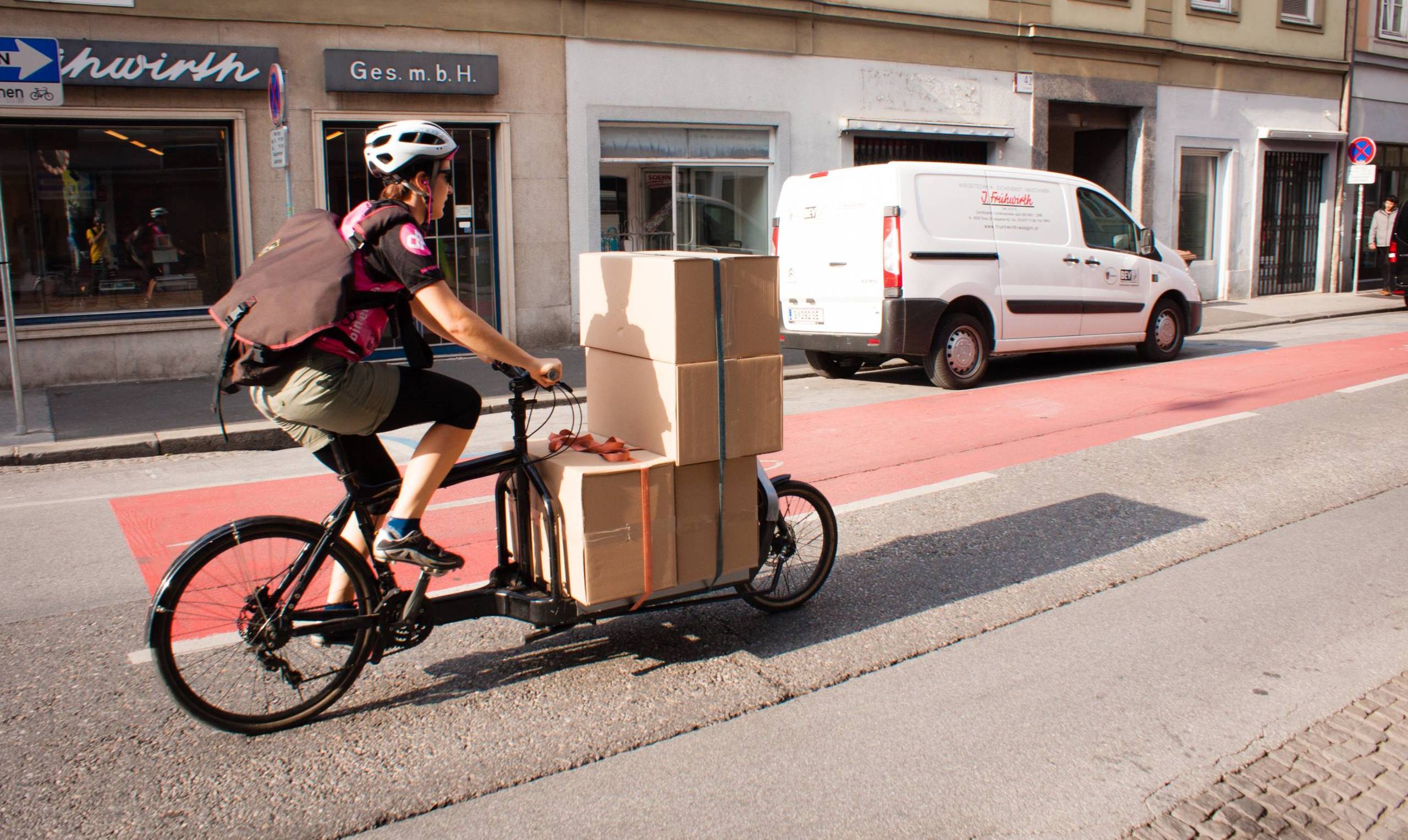 The cargo-bike market is growing at a rate of 60%. Photo: © Bike Citizens

While Germany has had rules in place governing car parking for several decades, the question of bike parking has long been neglected – and things are only slowly starting to change. The German building code provides useful guidance for planners around the country when determining the number of parking places for each dwelling and the standard facilities to provide. “Since 2020, the state of Hesse has stipulated that step-free access should be provided for bicycle parking spaces in and around houses”, says Köhler, which has enabled cargo bike parking for the first time there.
And Heinert points to the example of Hamburg, where cargo bikes will always be taken into account in future urban planning. New districts are being built around the HafenCity area, such as Grasbrook on the south bank of the River Elbe opposite the Elbphilharmonie concert hall, where large bicycle storage areas accessible via ramps will be provided in facilities built high up to ensure protection from floods. Areas accommodating cargo bikes, plus additional bike stands and cargo bike spaces in loading areas, are also planned.

Owning a cargo bike isn’t for everyone

Cargo bikes are a key element of the transport revolution, and for many people living in towns and cities, they’re a viable replacement for a car.  But even though they take up a lot less space than motor vehicles, Köhler points out: “Not every car has to be replaced by a cargo bike.” Rather than owning a cargo bike, people can hire one for their weekly supermarket shop, for a day out or to get to and from a hardware shop.

More and more hardware shops, discount stores and local authorities now give people the opportunity to hire cargo bikes. Hamburg now has 20 cargo bikes in its “StadtRAD” fleet, which are available at the regular sharing stations in public areas, while in Berlin the ADFC has the “fLotte”, a pool of around 200 cargo bikes which can be hired free of charge. Köhler believes that for people who don’t use cargo bikes every day, sharing is better than owning: “Sharing saves resources and creates more space in public areas.”

In 2014, the London Royal Borough of Kingston was one of three local authorities which bid for and won a share of £100million worth of funding to put towards a raft of improvements to cycling and transport infrastructure.
Interested in our Magazine?
Browse through it now
share article
This website uses cookies to improve your experience. Find further information in our privacy policy.
With your consent we also use cookies (e. g. from Facebook or Instagram) that allow us to provide advertising that fits your interests.
Decline Accept